Chris Mazdzer won over America when he competed at this past year’s Winter Olympic Games, and now he’s headed to this season of Dancing With The Stars, where he’s sure to garner more attention. And, as people learn more about him, they’ll also want to know more about the people in his life. Who is Chris Mazdzer’s girlfriend?

Us Weekly reports that Mazdzer’s girlfriend’s name is Mara Marian, and her LinkedIn page says she’s the owner of FUSE Weddings & Events in Utah. The Olympian’s busy schedule initially discouraged him from pursuing a relationship, but he eventually found someone who was the right fit to allow a long distance relationship, according to the same Us Weekly piece.

Now that Mazdzer is becoming involved with Dancing With The Stars, Marian has also been posting some snaps from the set on her Instagram, showing that they’re still apparently going strong. She also proved herself to be a huge supporter when Mazdzer won a silver medal earlier this year for luge singles. She, along with his sisters, provided an adorable display of patriotism for his team. Not only were they decked out head to toe in red, white, and blue clothes and face paint, they also had giant prints of Mazdzer’s head to wave around in the audience, per Us Weekly. 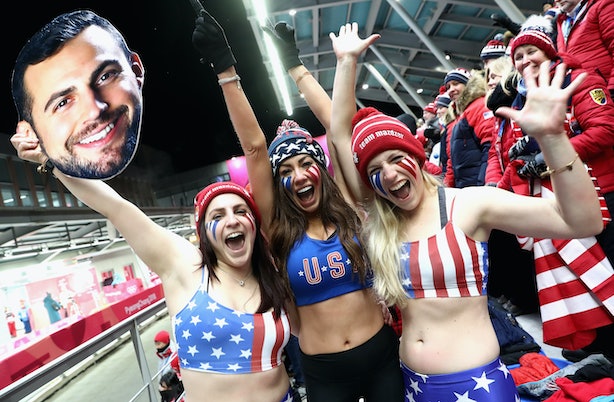 Apparently, the unending amount of support didn’t go unnoticed by the people around them at the Winter Games. “Everyone noticed them in the stands, even all of my competitors!” Mazdzer told Us Weekly in another article about the ordeal. “They asked my teammate Taylor Morris who the crazy American fans were and he replied, ‘We bring the best fans, boys.’ I’m glad they’re setting the standard for cheering at Winter events."

He also noted in the same piece that it took a lot of love to come out in such festive ensembles, especially given the fact that the weather at the games was so brutal. "Anyone whose support and passion inspires them to support me and the U.S. in head-to-toe minimal clothing in below-zero weather with wind chill is someone I’m so proud to be associated with,” he said in the same interview. "I feel so lucky they’re my family."

Though Marian isn’t an athlete like Mazdzer is (he previously dated bobsled driver Katelyn Kelly, according to a local NBC station), Mazdzer said in the first Us Weekly article that those differences actually lend to a healthy relationship — they both are occupied in their own jobs and interests. “It’s actually really nice," he said. "[We’re] totally different people and we just do our own thing. Plenty of personal time!"

Marian has also continued to share photos of her public appearances and business operations, so she’s got her own busy schedule to keep track of, too. But that hasn’t stopped her from supporting Mazdzer through his entire 2018 Olympic run, and it seems like she continues to do the same as he puts his dancing skills to the test on this all-athlete season of Dancing With the Stars.