A federal pledge to crack down on corruption is struggling to gain support from police and legal experts who believe the draft plan is too weak to catch politicians and public servants who break the law.

Corruption experts are urging the government to toughen the reform so a new Commonwealth integrity commission will have the power to launch its own investigations and hold public hearings into scandals. 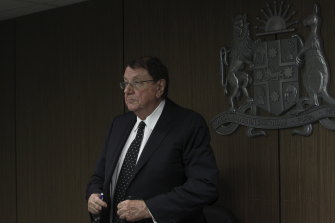 Former judge Anthony Whealy, QC, damned the federal proposal after the release of public submissions showing dozens of organisations had rejected the draft bill and called for changes to strengthen the safeguards.

The Australian Federal Police Association warned of “serious deficiencies” in the draft law because it would prevent members of the public from referring cases to the commission.

The Police Federation of Australia backed that concern and declared there should be “one rule for all” so that members of Parliament were subject to the commission in the same way as police officers and others in law enforcement.

The barrage of criticism prompted the Centre for Public Integrity, a group of former judges and prosecutors, to urge the government to fix the “weak” plan in its Commonwealth Integrity Commission bill.

“The government is the only major supporter of its CIC bill – it cannot proceed in its current form,” said Mr Whealy, the chairman of the Centre for Public Integrity.

“Stakeholders are united in calling on the government to broaden the jurisdiction and allow public exposure of investigations.”

The government received detailed submissions from the Law Council of Australia, Corrs Chambers Westgarth, Allens Linklaters, the Accountability Round Table, Transparency International, the Australian Human Rights Commission, Civil Liberties Australia and the ACTU among more than 200 responses to the draft.

The submissions were overwhelmingly opposed to the draft bill and called for significant changes to make sure the commission could deliver on the stated goal of investigating corruption.

Prime Minister Scott Morrison announced plans for a Commonwealth Integrity Commission in December 2018 but the plan stalled during 2019 and was not revived until December 2020, when the government released the draft bill and asked for views on the plan.

The government is yet to respond to the submissions and put the bill to Parliament, leading crossbench MPs to predict the plan will be delayed again.

“It’s clear that the Commonwealth Integrity Commission is a weak, roundly criticised model that we know will not pass the Senate,” independent member for Indi Helen Haines said. She wants government MPs and others to back a private members bill she has put forward to create a stronger watchdog.

The Law Council warned in its submission the draft law would prevent the commission from making any findings or recommendations relating to a member of Parliament.

The council also said the public should be able to refer cases to the commission, which should also be able to initiate its own investigations without having to wait for a referral from other Commonwealth agencies.

In another bid to give the commission more control of its own work, the Law Council said the government should drop a provision that would give the Attorney-General the power to block the disclosure of information to the commission.

The submissions were strongly against the proposed structure of the commission, which would have separate divisions for law enforcement agencies and public sector corruption including politicians.

The major groups also opposed what they saw as a narrow definition of public sector corruption because it would require a criminal offence to be involved, contrary to arguments that behaviour does not have to be criminal to be corrupt.

One group, the Institute for Public Affairs, backed the definition of corruption as a way to focus the commission on the gravest offences.

Submissions were more divided, however, on the government’s intention to prevent the commission holding public hearings on corruption inquiries involving public servants or politicians.

Allens Linklaters backed that approach and the Law Council of Australia acknowledged there might be times when closed hearings were best.

“Hearings before the commission should generally be conducted in private unless the commissioner considers that a closed hearing would be unfair to the person or contrary to the public interest,” the council said.

“In general, the bill is absurdly long and complicated. It is currently 347 pages in length. The definitions in Part 2 of the bill run to 10,765 words. That is around the same length as the Commonwealth Constitution, as originally passed,” she wrote.

“If it is seriously being proposed that there be a Commonwealth Integrity Commission which cannot investigate most public sector corruption, and in those few areas in which it can, it has to hold all its hearings in secret, and then issue secret reports that the public may not know about, then you can expect justifiably high levels of public distrust in, and contempt for, the system.”