Home » Lifestyle » ‘Copyright is for losers’: how did Banksy’s brash claim backfire?

A quick guide to why Banksy lost the trademark for four of his most famous works.

Banksy, the anti-authoritarian pseudonymous street artist from Bristol, is in a bit of a pickle, thanks to the European Union’s copyright court.

British greeting card company Full Colour Black, which specialises in graffiti-based cards, copied some of his most famous designs – including his famous Radar Rat – for its cards, and Banksy filed trademarks to try to stop them. 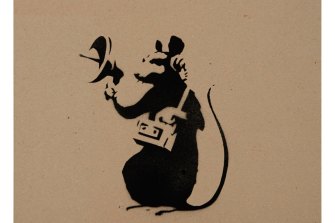 Banksy’s Radar Rat was one of the images in the court case.Credit:

But the EU Intellectual Property Office has just declared four trademarks invalid – the second time it has done so for Banksy works – accusing the artist of acting in “bad faith” by trying to hide his identity but also assert ownership of intellectual property.

Basically, the court said you can’t have it both ways. If you don’t play by the rules, you can’t seek their protection.

Well, exactly. He’s the most famous street artist in the world. His subversive, political designs pop up on walls (or other unexpected places) and make global news.

He has a mischievous sense of humour. Recently he sold an artwork at Sotheby’s designed to shred itself when the hammer went down (it didn’t quite work). In 2010 he directed a documentary, Exit Through the Gift Shop, which left viewers utterly confused as to whether it was entirely made up. In 2019 he was kicked out of St Mark’s Square in Venice for selling art incognito without a permit.

Even after decades of fame his identity has never been officially confirmed. One recurring theory is that he is Robert Del Naja, from the band Massive Attack. A 2008 investigation by the Mail on Sunday confidently outed him as Robin Gunningham, a “former public schoolboy brought up in middle-class suburbia”. 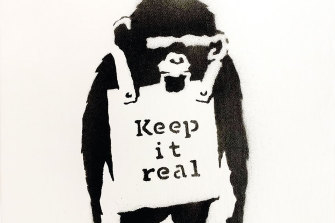 Banksy’s Keep It Real sold in Auckland for $1.6 million.Credit:

What’s the EUIPO and what is a trademark?

It is adjudicating the fight between Banksy and Full Colour Black. The card company is on a winning streak: last year it got Banksy’s trademark on his Flower Thrower artwork cancelled.

A trademark is an alternative to copyright, used by companies to protect their brand from imitators and competitors. A registered trademark establishes your ownership over a distinctive design, sign, company name or slogan for commercial use.

What did Full Colour Black argue?

It sought to have trademarks cancelled on four Bansky works: Radar Rat, Laugh Now, Girl with an Umbrella and Bomb Hugger. These “most iconic and famous of his works” had been used in lots of merchandise, posters and graphic works but never by Banksy himself, who “has only ever reproduced the work as a work of art”.It said the work was “a work of graffiti sprayed in a public place” free to be photographed and disseminated widely. Banksy even put high-resolution versions of his work on his website and invited the public to download it.

Also, in his book Wall and Piece, Banksy said “copyright is for losers” and the public was morally and legally free to reproduce and use any public copyright works.

What did Banksy argue?

He pointed out many works of art are registered as EU trademarks, by artists such as Andy Warhol and Keith Haring, “to prevent another party from taking advantage by copying the sign”. The artist’s “anti-establishment viewpoint does not prevent [him] from utilising establishment mechanisms” to prevent unauthorised copying.

His comments that copyright was for losers “was clearly ironic as it was accompanied by both a copyright and trademark symbol”, he said. “It did not encourage slavish commercial copying”.

What did the court decide?

The court noted that Banksy was in a bind: because he was anonymous, he couldn’t use copyright law to protect the art without identifying himself, but “identifying himself would take away from the secretive persona which propels his fame and success”.

But it said he couldn’t use a trademark instead of copyright law.

A trademark can be declared invalid if its owner applied in bad faith: with dishonest intention or departing in some way from ethical behaviour or honest commercial practice.

The court found Banksy had applied in bad faith because he had “never actually marketed or sold any goods or services under the contested [trademark]“. At least, not until October 2019 when he announced a Banksy pop-up shop in Croydon called Gross Domestic Product – which is now an online store.

But, unfortunately, the artist himself reportedly admitted he had “been making stuff for the sole purpose of fulfilling trademark categories under EU law”.

By his own words, the court said, he had started selling merchandise “to circumvent the law”, and “these actions are inconsistent with honest practices”.

“There was no intention to genuinely use the [artwork] as a trademark,” the court found. He’d been trying to find a way to assert control over the work without having to reveal his secret identity in a copyright action.

The artist can appeal the decision but isn’t expected to. The lawyer for Full Colour Black has said the most recent decision “sounds the death knell for [Banksy’s] trademark portfolio – at least in the European Union – and it raises the spectre of cases in other countries”.

Does this ruling apply in Australia?

Lawyer Tim Golder, an intellectual property specialist and partner at Allens, says the EUIPO decision isn’t directly enforceable in Australia, which has its own trademark system. However, Banksy has “got himself in a bit of a corner” legally, and would likely have the same problem here as in the EU.

Banksy could claim breach of copyright. But in that case “he has to reveal himself to the court”, says Golder. “The legal person who owns the right has to make the claim… you can’t get out of that.”

But a trademark is invalid if you don’t intend to use it in the usual way, Golder says.

And even if it’s registered, it might not stop people from copying it. “If I reproduce [an artwork] on a greeting card I’m just reproducing it,” says Golder. “They’re not being used as a trademark… as a badge of origin.”

“He’s trying to fit a square peg in a round hole by using trademarks.”