Home » Lifestyle » Coronavirus UK: We must learn to live with it, says ROBERT DINGWALL

ROBERT DINGWALL: We must learn to live with coronavirus – just like Samuel Pepys lived with the Great Plague

Humans have lived with infectious diseases for at least 15,000 years. Many of these are shared with animals. They infect us, we infect them and, from time to time, there is a new crossover, as with Covid-19.

When a novel infection appears, people are naturally fearful. Will this new virus or bacterium kill us all? Is it going to wipe out humanity? Yet, after a fairly short period of time it becomes clear that we are not trapped in science fiction, after all, and that humans will survive.

Bit by bit, societies get used to the infection, seeing it as a nuisance rather than something that should disrupt a whole way of life.

And when an epidemic of the same infection does come round again, people and institutions know how to deal with it. They get on with the business of living.

Bubonic plague – the Black Death – devastated 14th Century England. Yet by the Great Plague of 1665, which was essentially the same disease, the City of London authorities knew exactly what they were dealing with. 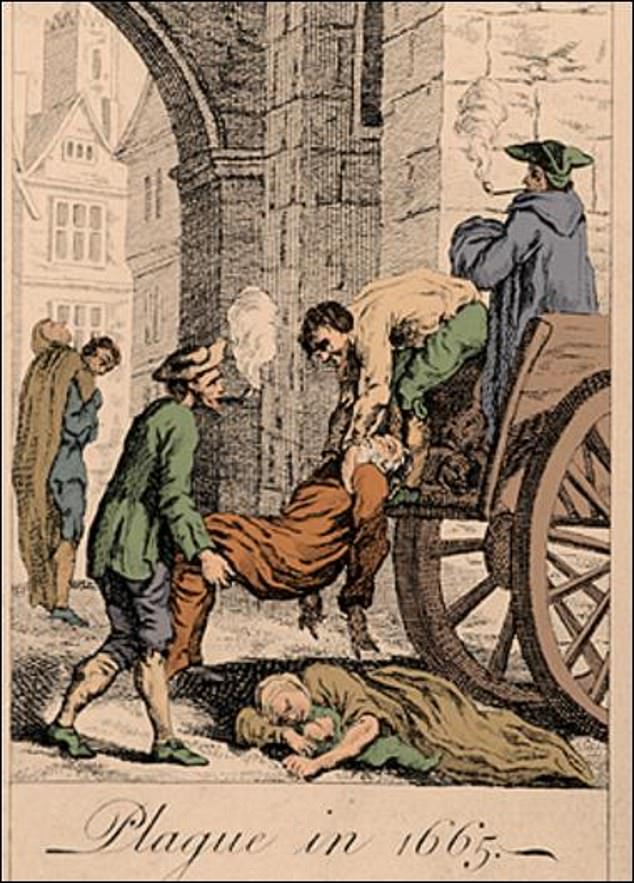 Bubonic plague – the Black Death – devastated 14th Century England. Yet by the Great Plague of 1665 (pictured), which was essentially the same disease, the City of London authorities knew exactly what they were dealing with

In his diaries of the time, Samuel Pepys records how he went to work as normal, hung out in his favourite coffee houses and even found time to visit his mistress.

Houses were boarded up around him, carts removed the corpses of the dead, yet life went on.

Humanity has a long history of dealing with these things, and what experience shows us is that the only practicable interventions are social and behavioural. How can we slow the movement of the new infection through the population while medical science catches up with treatments or vaccines?

So back in February and March, when we first realised the coronavirus was among us, it was right to take emergency measures. We had limited information, after all. We were right to be afraid of the unknown and it was sensible to adapt the manual for influenza, another respiratory virus, for a short while at least, and restrict the movement of people.

The flu model was never perfect, of course. The coronavirus is a bit different, although it seems to be transmitted in similar ways. But we should pay attention to influenza because our history of dealing with it puts Covid-19 into perspective.

Today, would we regard a new influenza pandemic as a catastrophe? Certainly not. We would see it as a nuisance, despite the significant death toll that would result. This is because we know how to make flu vaccines reasonably quickly, within six to nine months. 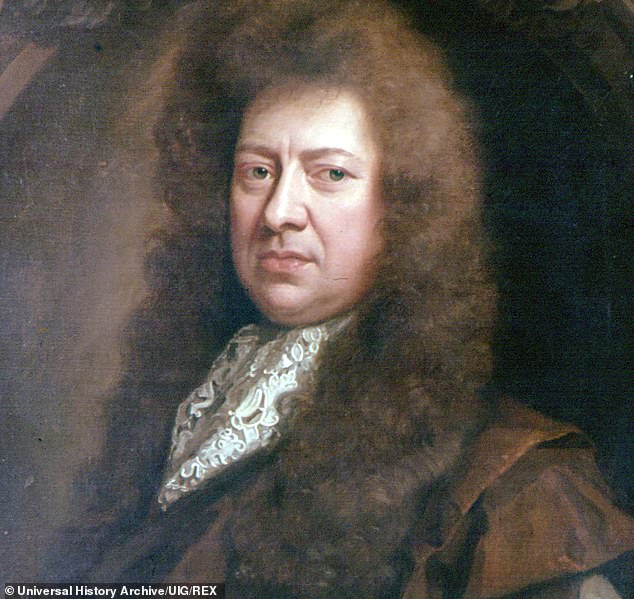 In his diaries of the time, Samuel Pepys (pictured) records how he went to work as normal, hung out in his favourite coffee houses and even found time to visit his mistress

Indeed, until the early 2000s when we started to vaccinate for flu, we accepted that outbreaks would kill 20,000 to 50,000 people every winter without much comment.

It was a great number of deaths, but it was not considered so great that we should shut down the economy.

If we took a similar attitude to Covid-19 today, and got on with our lives, then we would find ourselves returning to the death rates of the early 2000s, before vaccination started delaying deaths (sometimes we seem to forget death can only ever be postponed, not prevented).

There should, in other words, be a real choice in front of us, a choice that is not being discussed. We could move on from our current state of fear to acceptance.

It is important that we do this. Yet we are not being offered this choice by those in authority. Why not? Why are we still locked into the fear and anxiety of February and March?

Some people think that, in continuing with the draconian restrictions, there is a conspiracy to enslave the British people. I am not one of them. I think, rather, we have found ourselves in the hands of a scientific and medical elite with limited understanding of humanity and its needs.

This failing is in the nature of their background and their high-minded pursuit of a noble ideal. Their intentions are good, but not practical. 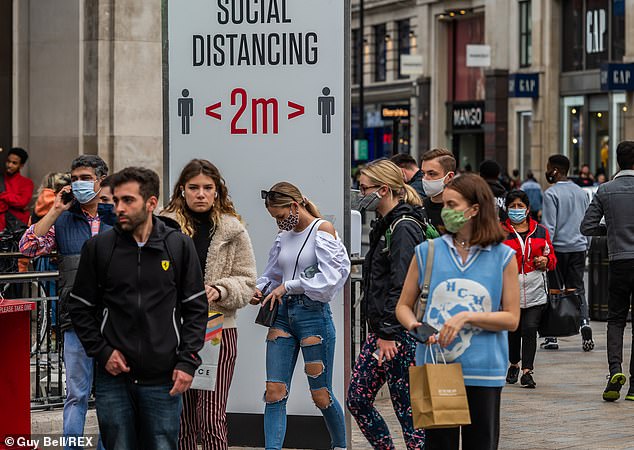 So back in February and March, when we first realised the coronavirus was among us, it was right to take emergency measures. Pictured, people on Oxford Street in London this week

The clinicians I have met through my work with a hospital ethics committee and in my research on general practice know medicine is always about compromise. But this is not a universal view.

Research by medical sociologists has established that many medics and scientists assume infections should be controlled or eliminated as a matter of course. They do not consider that it might be impossible or that the cost could be more damaging than the disease itself.

Public health specialists are frustrated that the public they serve does not share this vision of a utopia where lives and choices would be shaped by concerns for health and only by health. Laboratory scientists, meanwhile, need to justify their research funding.

And this is why we have an obsession with Covid-19 deaths at the expense of others. Why are Covid deaths more important than deaths from cancer, strokes or domestic violence? Or from the deaths that will be caused by the economic devastation the Government has set in train and cannot prevent?

The preoccupation with controlling or – even more far-fetched – eliminating Covid-19 can lead to absurd results, such as urging people to wear face coverings all the time at home, even during sex.

Some doctors would like us to wear face coverings forever so that we might interrupt the transmission of every respiratory virus that we have shrugged off for the last few thousand years.

It can lead to recommendations that households never be allowed to visit each other, sentencing millions of UK citizens to solitary confinement with serious implications for their mental health.

Politicians, meanwhile, are locked in by their own fear of the disease and fear of the way the public would respond to a change of direction.

This change would be easier to justify if as much attention had been given to evaluating the harms and benefits of social and behavioural interventions as has been given to therapies and vaccines.

As the Governmnet’s chief scientific adviser, Sir Patrick Vallance, has emphasised, the public has a right to expect that any new vaccine will have been rigorously tested for safety and effectiveness.

Why should we expect any less for social distancing interventions? Yet the two metre rule, which has had the effect of depressing and impoverishing millions, has been introduced with little discussion and less research.

I’m glad to say, however, that the public might be ahead of the politicians in all this – in the way they are responding and in their readiness to accept that the grim experience of the last six months justifies an important change in direction. We need a shift towards managing the virus rather than trying to suppress it.

If 80 per cent of people are not complying with self-isolation, the proper answer is not to try to bully them into compliance with threats of fines, police raids and tanks on the streets.

It is to understand that self-isolation is not appropriate if you do not share the living conditions of the elites who make the rules – and that the risk does not seem proportionate to the benefits for ordinary people. 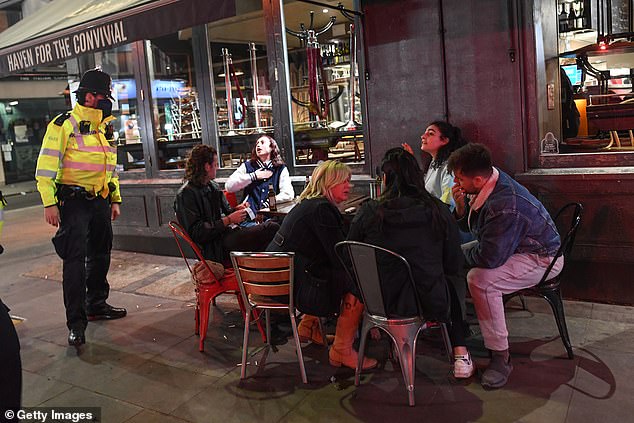 I’m glad to say, however, that the public might be ahead of the politicians in all this – in the way they are responding and in their readiness to accept that the grim experience of the last six months justifies an important change in direction. Pictured, drinkers in Soho this week

Let’s recognise that face covering, as practised, is irrelevant in most circumstances. The whole country should not be driven by the exceptional circumstances of rush hour in major cities. If most people are currently wearing face coverings, acknowledge that this is because they want to avoid trouble rather than to achieve protection.

We will never eradicate the threat from coronaviruses because they are so widespread among animal populations. We have lived for thousands of years with the four that contribute to common colds.

Now we can add a fifth. With current efforts, a vaccine is likely to arrive someday that will deliver some benefit to some people for some period of time, much as the flu vaccine does.

But when it will arrive and how effective it will be, we simply do not know. And until then, like Pepys, we must start to accept this new plague is here to stay.

A real ‘operation moonshot’ would not be spending billions on Covid tests (that would inevitably produce huge numbers of damaging false positives) but on researching coronaviruses and other virus families.

This would put us in a similar position to the one we face with influenza, so next time there is an animal/human crossover, we can produce a vaccine as quickly as is now possible for the next flu pandemic.

We need to be sure, however, that there is a society and an economy left to resource this research and deliver the benefits.