Leader of the pack! Woman with 13 dogs including 10 Irish Wolfhounds says her pampered pooches are ‘spoiled to bits’ with their own living room and £200-a-week diet

Some people might think they’re barking mad but this family love sharing their house with 13 dogs.

Claire Mather, 44, and husband Jason, 47, from Holmfirth, West Yorkshire, are the proud owners of 10 Irish Wolfhounds – the world’s tallest breed of dog – as well as a Whippet, a Lurcher and a White Swiss Shepherd dog.

The couple, who have three children together – Eve, 23, Jack, 21 and Nell, 15 – run a company called Austonley, which breeds Wolfhounds, sells pet food and accessories and rents field space out to other dog walkers. 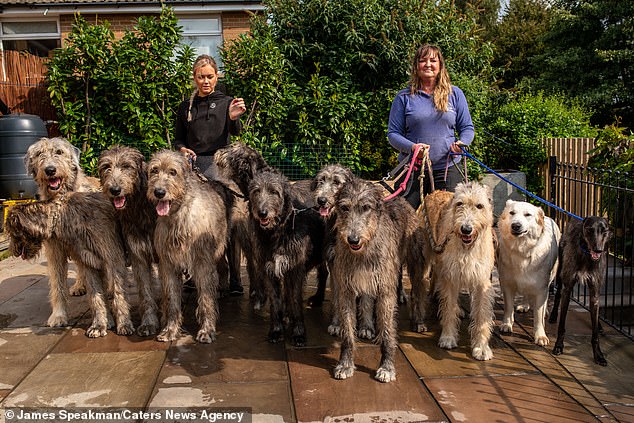 Claire Mather, 44, and husband Jason, 47, who live in Holmfirth, West Yorkshire. spend hundreds of pounds a week on dog food, share their sofa with their beloved hounds and even take their pups to the pub – but they wouldn’t have it any other way (pictured Claire, 44 with her daughter Eve, 23, their Lurcher, White Swiss Shepherd and nine of their ten Irish Wolfhounds) 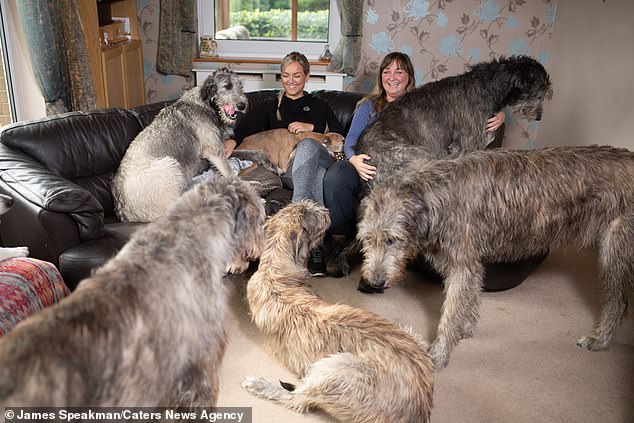 The dogs, who are on average the tallest breed in the world, have their own lounge but will sneak in Claire’s living-room for a cuddle

The couple got their first Irish Wolfhound eight years ago and have never looked back. They even moved into their current home specifically to give their dogs more space.

Despite sharing their home with their pack and spending £200-a-week on food, they say they wouldn’t have it any other way.

Claire said: ‘We absolutely bought this house for the dogs. They all live in our home as part of the family rather than out in a kennel, barn or stable.

‘They have their own living room, with a single bed, sofa and smart TV but to be honest they seem to prefer it in our living room.

‘They also have their own kitchen and bathroom so there is plenty of room for them but they are free to wander around the whole house as they like. 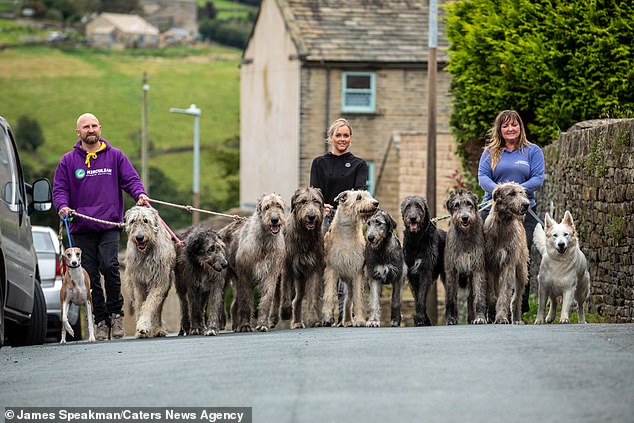 Walking all of their thirteen dogs alone is impossible, so Claire, Jason and their daughter Eve have to join forces (pictured) 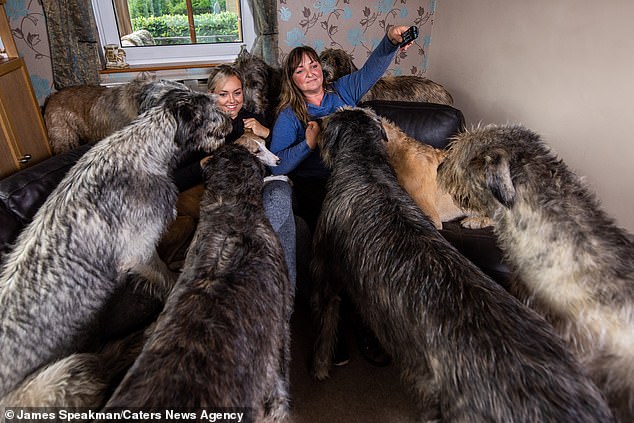 The couple, who breed Irish Wolfhounds professionally, spend £200 on food and treats for their pets 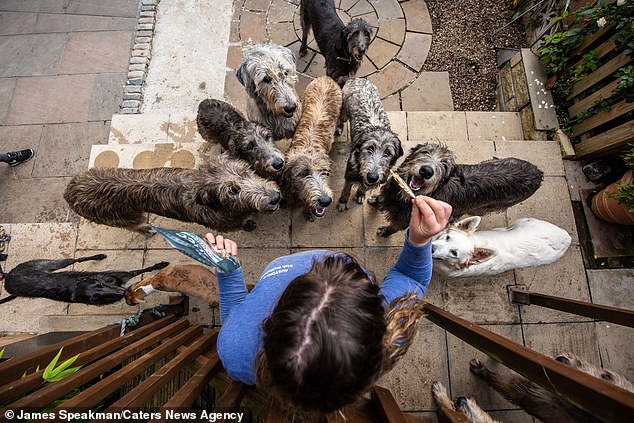 The dog-lover explained she and Jason had to make sure each of their dogs got enough exercise per day, come rain or shine 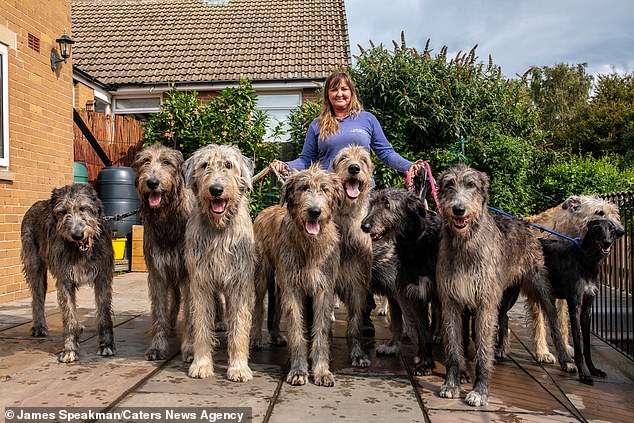 Proud dog mama Claire, pictured with nine of her Wolfhounds. One of the ten was not feeling well and sat the photoshoot out 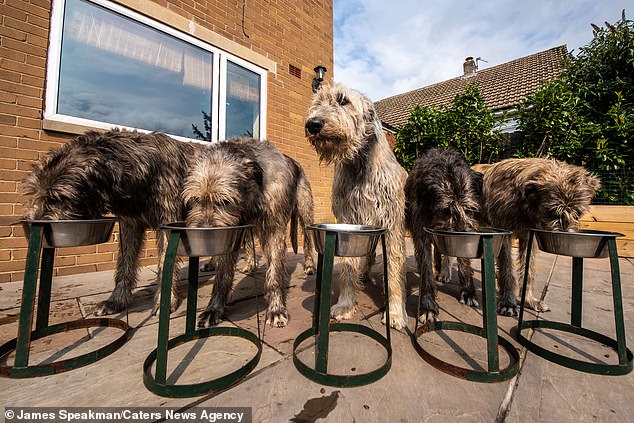 Five of the ten wolfhounds enjoying their meal in the family’s courtyard. The dogs have their own kitchen and bathroom

The Wolfhounds – Cilla, Bella, Ragnar, Bigfoot, Lena, Nell, Fame, Geronimo, Hilary and Inca – Salad the Whippet, Bentley the Lurcher and the White Swiss Shepherd dog all go on daily walks and enjoy trips to the pub.

Claire continued: ‘We don’t have a set routine as such but everyone gets to go out on a walk at least once a day. We have to go out whether it’s raining, snowing or hailing, they need their exercise so that’s always a priority.

‘Where we live has everything needed to exercise these big powerful hounds, including woodland, moorland, river and reservoir walks, with 90 percent off lead.

‘Plus, we are surrounded by tons of dog friendly pubs for some very serious doggy socialising.’ 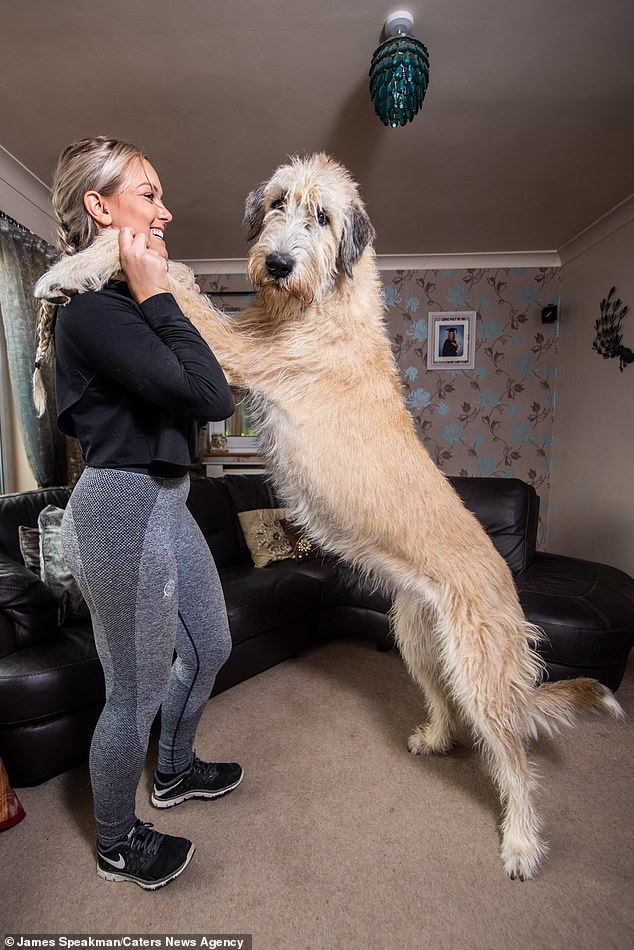 Eve standing up with Wolfhound Nell. Standing up, the dog can be as tall or even taller than a human 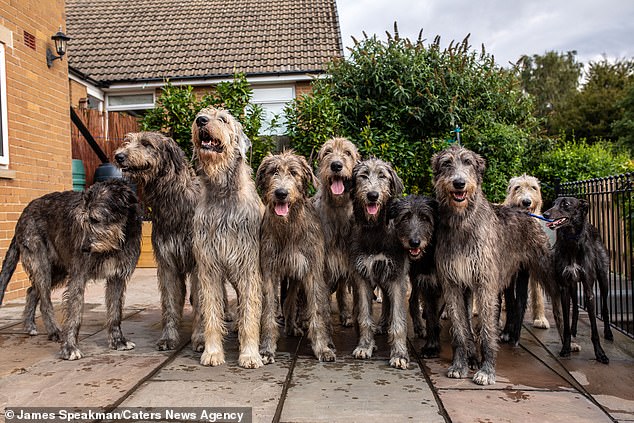 The Woldhounds with the family’s Lurcher. Claire said caring for the pack was ‘hard work’ but worth it 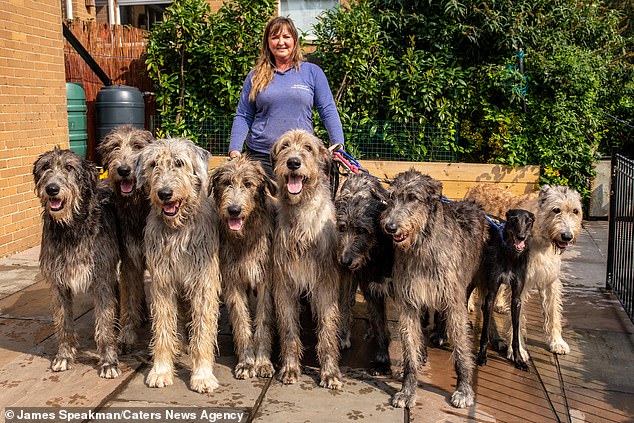 Claire with some of her dogs. The breeder said her pack of Irish Woldhounds earned her strange looks in the street but that she didn’t mind

When Claire and Jason aren’t walking the dogs, they spend their time cleaning, prepping food and grooming.

The hounds are treated to their own lounge complete with two double beds, a single bed, sofas and a TV but often prefer to snuggle up next to Claire and Jason in the other living room.

They also have their very own kitchen and bathroom for dog food prep, eating and washing but are free to roam the house as they please.

Claire added: ‘They’re spoilt to bits to be honest. It is hard work but the best things in life usually are.

‘People sometimes give us odd looks or perhaps wonder why we would want so many dogs but when we got our first Irish Wolfhound eight years ago, she changed our lives. Living with our hounds is our life and we wouldn’t change it for the world.’ 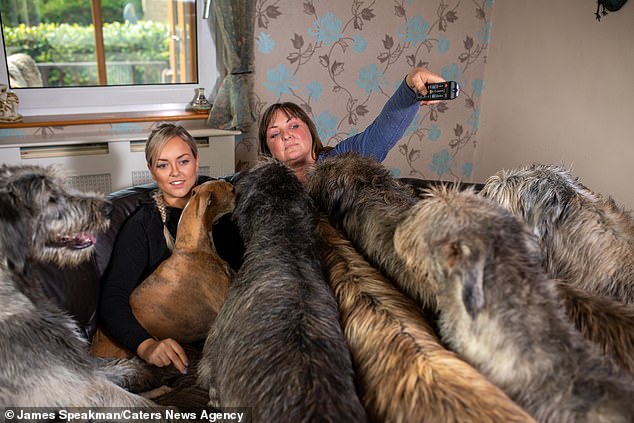 Claire, pictured trying to watch TV with her daughter Eve, admitted she liked to spoil her wolfhounds ‘to bits’ 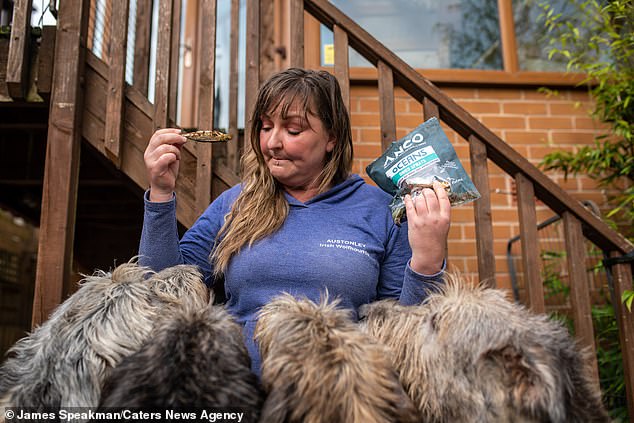 The breeder said she spent her day walking her several dogs, cooking their meals or grooming their hair 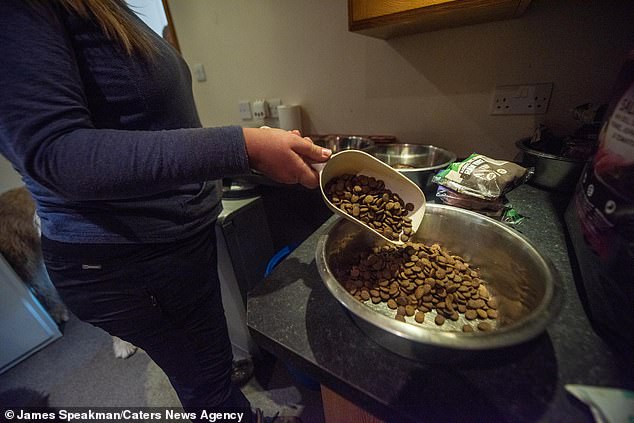 Preparing the large dogs’ lunch is no joke, with Claire and Jason spending hundreds a week on their pets’ diet 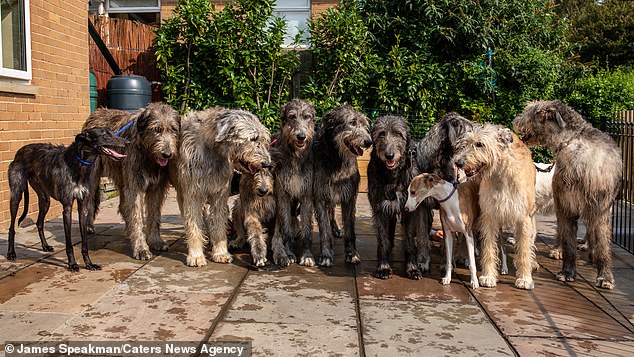 The family’s dogs  count ten worldhounds, a Whippet (right), a lurcher (left) and a White Swiss Shepherd in total 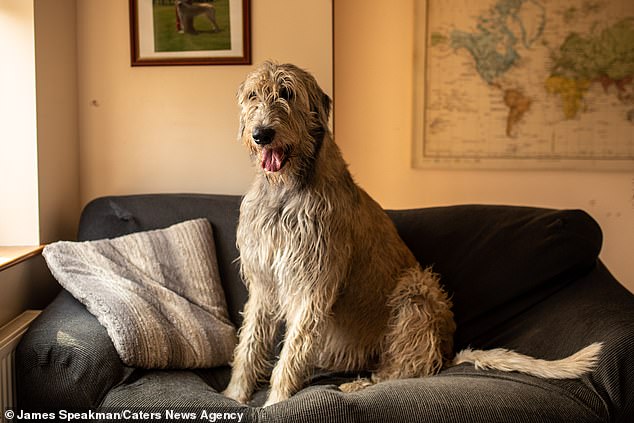 Irish Wolfhound are considered the tallest dogs in the world on average, with a minimum height of 81 cm for males and 76 for females (pictured: Geronimo, one of Claire’s Irish wolfhounds) 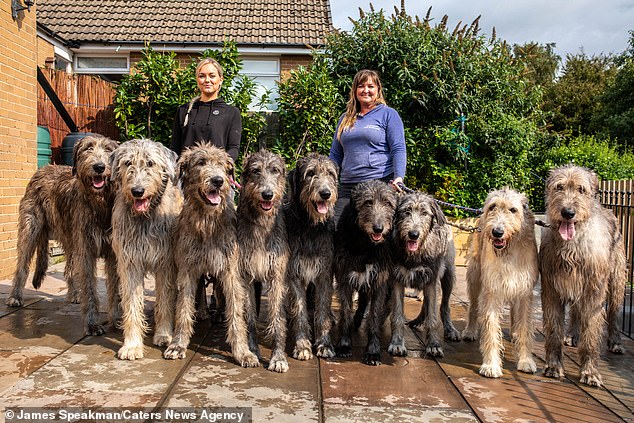 Eve and Claire with their Wolfhounds. The family use a special van to transport their happy pack 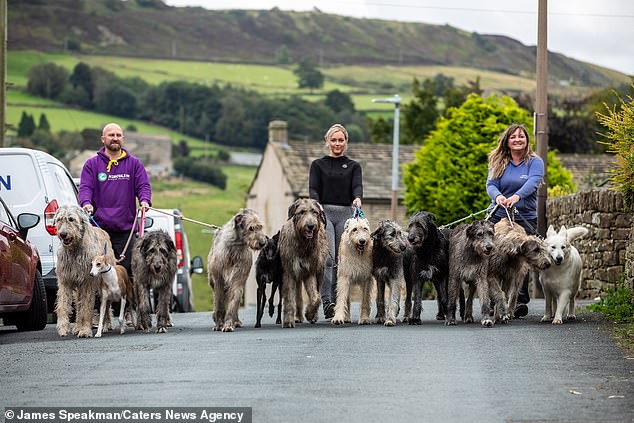 Jason, Eve and Claire walking their dogs. They can only keep a few on a leash at a time, meaning they take them on several walks a day 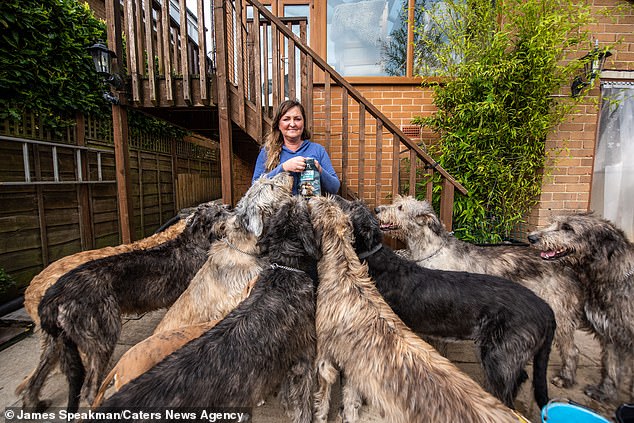 Claire trying to distribute treats to her eager pack of Wolfhounds. Claire invests in chicken wings and chicken thighs as treats for her pets 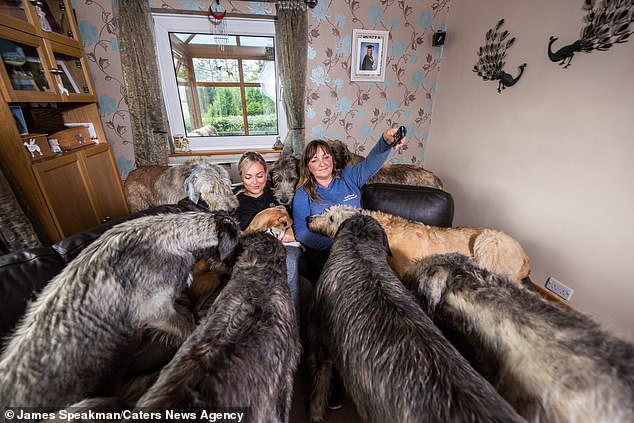 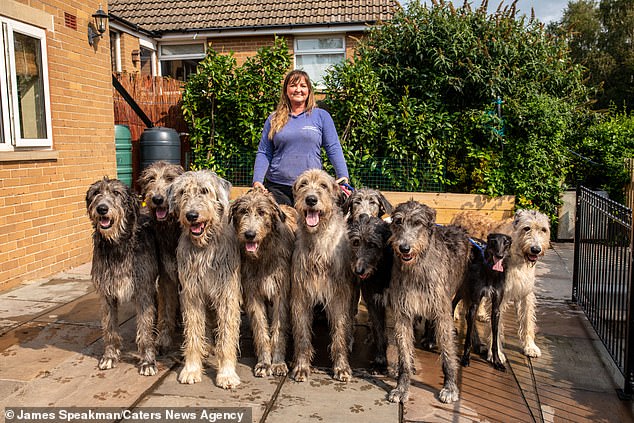 Claire said that lots of local pubs around her house were dog-friendly, which meant some of her wolfhounds could come with her on her outings and socialise 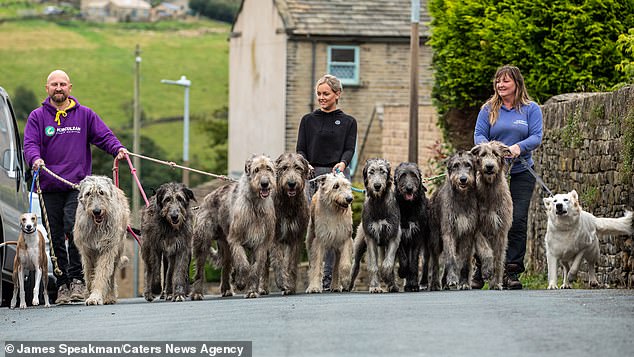 The dog lover, pictured with her husband and daughter, said there were plenty of woodland, moorland, river and reservoir walks to make sure their dogs could all exercise