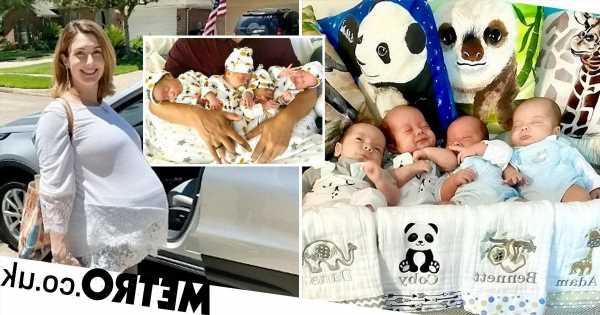 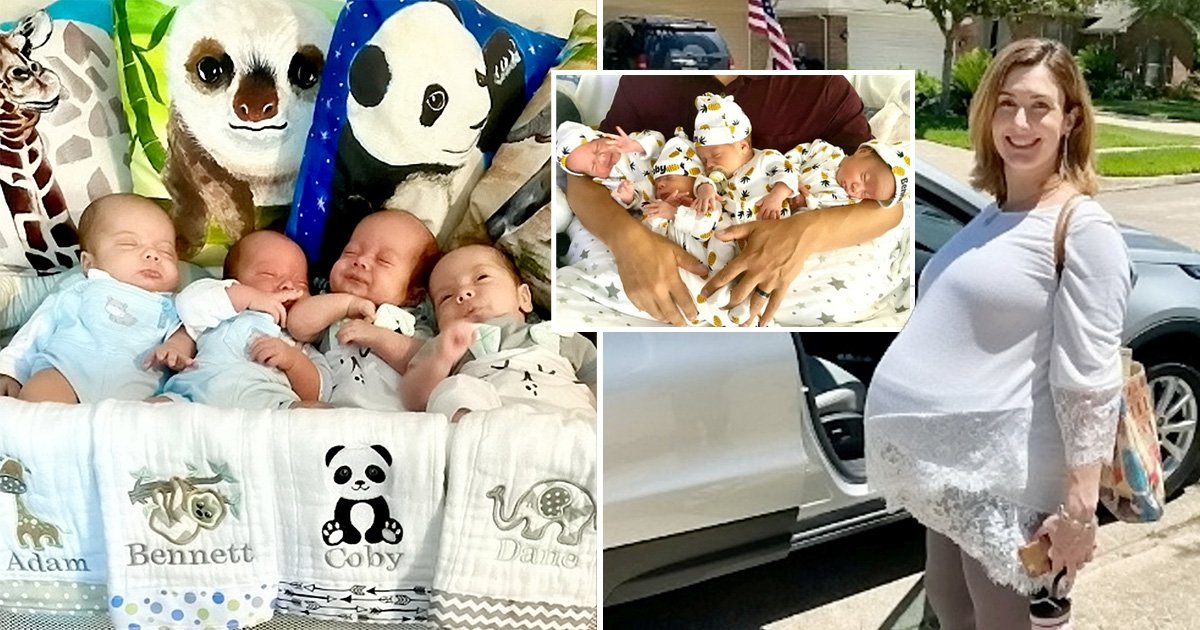 The couple share two-year-old Sammy together and both have a child from previous relationships, but hoped for one more to complete their family.

So when Gaby and 50-year-old Patrick found out they were expecting in December 2021, they were thrilled.

However, at their 12-week scan, the sonographer broke the news that they were expecting not one, but four babies.

Patrick, a marriage and family therapist, said: ‘We thought it would be great to have a fourth and final child and we had no idea it was quadruplets until the sonographer just started counting.

‘I thought she was counting different angles at first but then it clicked. It was a lot to wrap our heads around.’

After the shocking news that they’d conceived quadruplets naturally (a one in a million odds), Gaby needed to have her cervix sewn shut to prevent miscarriage and was monitored carefully throughout her pregnancy as she was considered high-risk.

But in July 2022, the mum gave birth at 34 weeks to four boys, Adam, Bennett, Coby and Dane, and – despite the huge adjustment to being a family of nine – they are thrilled with the new arrivals.

However, there’s no denying that four new babies requires a lot of work.

The couple say they get through 47 nappies, a packet and a half of wipes, 32 bottles and three loads of laundry every 24 hours.

Patrick said: ‘With four babies it’s been a complete restructuring of everything.

‘We’re trying to fit our existing life in with these new babies, but it’s been an honour and a joy so far.’

Gaby and Patrick also admit that Bennett and Coby look so similar that they have to paint their toenails different colours to tell them apart.

The 40-year-old mum said: ‘I get the quads confused sometimes because Bennett and Coby look pretty identical – I have to paint one of their toenails so I can tell them apart.

‘Bennett has a green toenail and Coby has a white toenail.

‘We have colours for Adam and Dane too but as they’ve got older, they are easier to tell them apart.’

The parents add that their personalities are showing now, too.

‘Adam is the leader, Coby is very cheery, Bennett is very chilled, and Dane is our needy and outspoken one,’ Gaby added.

‘It’s been challenging but it’s been so nice to have them all home so we could cuddle with them all.’