Home » Lifestyle » DAN HODGES: Catsatrophe and Corbyn in No10

DAN HODGES: Catsatrophe and Corbyn in No10: what Mrs May REALLY thinks No Deal means

It was one of the strongest passages in what was widely acknowledged to be the most impressive speech of her premiership. ‘No one wants a good deal more than me,’ Theresa May promised her party conference, ‘but that has never meant getting a deal at any cost. Britain isn’t afraid to leave with no deal if we have to.’

It was also a lie. In reality, the Prime Minister is terrified of no deal. And so are her Cabinet.

In the days before shimmying on to the stage to the strains of Dancing Queen, her aides were being deployed to sing a rather different – and much bleaker – tune.

In a series of private briefings with key opponents and supporters of her Brexit strategy, the stark reality of no deal was laid bare. In the words of one senior official, it would be ‘a car crash’. 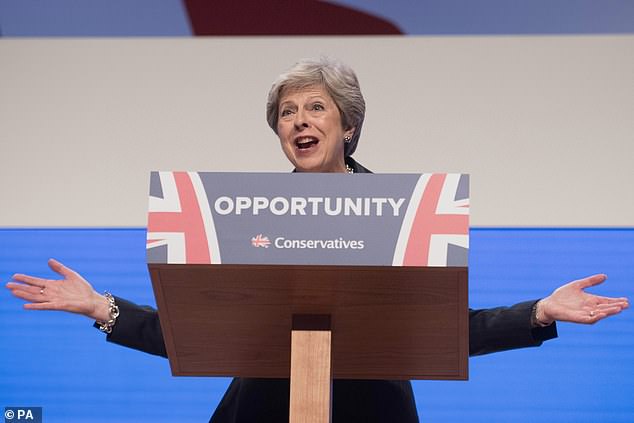 In a series of private briefings with key opponents and supporters of her Brexit strategy, the stark reality of no deal was laid bare.

Cartwheeling out of the EU would invoke no less than ‘a number of separate COBRA scenarios’ – emergencies requiring the activation of the Government’s civil contingencies committee. As one adviser reportedly phrased it: ‘Yes, the Remainers cried wolf with Project Fear. But remember, in the end a wolf did turn up – and it ate the boy.’

Which won’t stop May’s back-bench enemies branding such warnings as Project Fear 2.0. To their eyes, this is just a final, desperate attempt to terrorise them into dropping their opposition to Chequers. They are wrong. May’s anxiety is not confected, but chillingly sincere.

Not least because it is shared by most senior Ministers. Speaking to members of the Cabinet across the Brexit spectrum – from committed Remainers, through born-again Brexiteers to battle-scarred Leavers – the message is the same.

No deal would be a political extinction-level event that would almost certainly hand the keys of No 10 to Jeremy Corbyn. ‘Think back to the 2012 fuel crisis,’ a Brexit-supporting Cabinet Minister explained to me. ‘We would be looking at the equivalent of one of those every week for about three months. Yes, after that things would calm down. But imagine the damage that would have been done by then.’

Another said ‘there are just too many uncertainties with no deal’. A third stated simply: ‘It would be a catastrophe.’ On one level, this unanimity of dread is boosting May. With the effective deadline for a deal mere days away, there is a realisation there is no longer time for leadership game-playing.

‘We have to stand behind her now,’ one Cabinet member who harbours their own prime ministerial ambitions said bluntly. ‘This is about the national interest.’ But there is also growing agreement that the Government will need a fall-back position in the event Chequers fails to secure the support of a hostile EU. 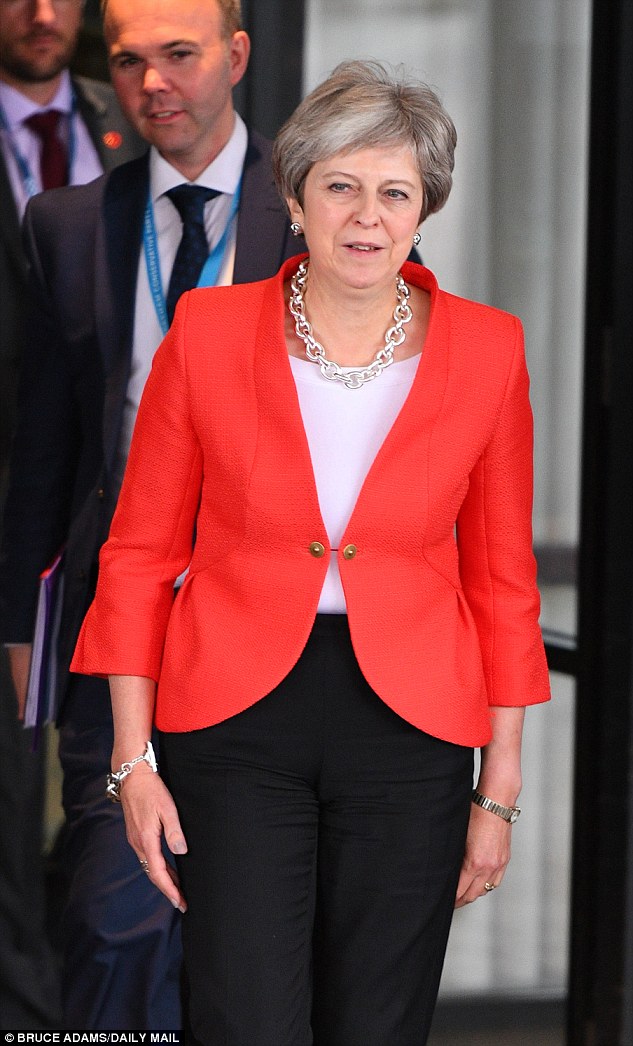 Last night Downing Street cautioned that Theresa May would not be bounced into a Brexit deal as the European Union said an agreement was imminent. The Prime Minister is preparing to table new proposals on how to avoid a hard border before a key Brexit summit on 17 October

For a number of senior Ministers, this means giving the various Government departments the green-light to begin preparing the ground for a deal that comprises elements of both Chequers and a free-trade Canada model. Or, as one Government insider dubbed it, ‘the Chanada option’.

‘If we can’t pull off Chequers, then we’re going to need an alternative to no deal,’ a Minister explained. ‘But it’s also going to have be something that doesn’t make it look like Chequers has been completely dumped. The Prime Minister has said we need a bespoke agreement, and she can’t be seen to be folding to the ERG or the EU. So Chanada may be a halfway house.’

Up until now, May has been resolutely sticking to the line it is her way or the landmine-strewn no-deal highway. But Ministers believe they have started to detect a shift in her stance.

In her main conference interviews, and her speech, there was no mention of the C-word. Chequers had indeed been chucked. ‘She’s started using the phrase ‘free-trade deal’ instead of ‘Chequers’,’ a colleague noted. ‘That’s a positive move. And a significant one.’

It’s a move that has come very, very late. As one Minister explains: ‘You can’t just pivot to a new option. If you’re going for a Canada-style deal, that needs all the departments to be in alignment. There are lots of highly technical details to get across. If we want a fallback, we have to start preparing now.’

The dilemma for May is the signal that would send to her negotiating partners.

Any suggestion of a change in stance would be seized on by the EU as evidence of weakness. If the PM isn’t seen to be standing full-square behind Chequers, what chance is there of an endorsement from Angela Merkel, Emmanuel Macron or Michel Barnier? 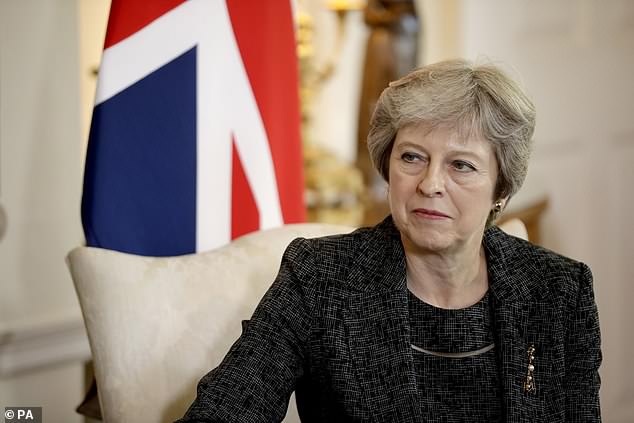 But in truth May is facing a simple, and much more fundamental problem. Reality has finally caught up with her. ‘No deal is better than a bad deal,’ was a fine soundbite, and a logical starting point for negotiations. But it was also a fiction.

Yes, Britain can indeed leave with no deal. But not, No 10 believes, without facing a political and economic cataclysm. Gridlock, food shortages, shortages of vital medicines.

Eventually each of these crisis would pass, as businesses and the markets adjusted. But they would leave permanent scars.

Brexit would be forever defined and aligned in the public’s mind by those eight to 12 weeks of crisis.

AS WOULD the May Government. Corbyn would point to the empty shelves, the motorways turned into trailer-parks, the RAF flights bringing emergency medical supplies, and ask: ‘Would I really be worse than this?’ The answer, of course, is yes. But the motorist stuck in a ten-hour petrol queue would be forgiven for thinking otherwise.

And that is what Theresa May is banking on: a hope that her rebellious MPs, and some of Corbyn’s more moderate backbenchers, can be persuaded at the 11th hour by the cold, hard facts of a no-deal Brexit. It’s why her advisers have been despatched to present, if not quite proclaim, the truth.

In her conference speech she said of no deal: ‘It would be tough at first, but the resilience and ingenuity of the British people would see us through.’ They would. But not, she fears, before the little boy had been devoured by the wolf.

I understand that Health Secretary Matt Hancock caused a mini-crisis for British diplomats on his recent trip to China – by demanding to toboggan down the Great Wall.

‘We were visiting the Mutianyu section,’ an aide explains, ‘and they have an area where tourists can get on a trolley and slide all the way back down. Matt said, ‘We’re definitely doing this!’ ‘ But embassy officials were petrified by the idea of a Cabinet Minister careering off and crashing on to the Silk Road. ‘They told us it would be better if we walked down, but Matt insisted,’ the aide adds. ‘He started down, but every time he got up any speed this figure in a suit would appear and slow him down.’

The ambassador had apparently ordered a junior official to make the ultimate sacrifice and become a human crash barrier if needed. Jeremy Hunt was never this much trouble.

Boris Johnson caused a stir, and Theresa May won plaudits for her speech. But I’m told the star of the Tory conference reception circuit was Deputy Chairman James Cleverly. ‘There isn’t a delegate he hasn’t shaken hands with,’ an MP said. ‘And he wasn’t just doing the ‘brush past’ – he was properly spending time with them.’ Keep an eye on him.

Quotes of the week

‘I’ve told him there will be no Septimus and no Octopus. I have had enough.’

‘Glad some brave young souls decided to ignore the difficulties caused by sudden noises 100 years ago.’

‘Love Island and #MeToo? We might have to decide which camp we are in.’

Head teacher Jane Lunnon tells girls that being a fan of the TV dating show is incompatible with feminist causes.

‘Some of your colleagues are pushing the theory that Mr Skripal was some kind of human rights activist. He was a spy… He’s a scumbag.’

Tom Symington, ten, tells Prince Harry and wife Meghan why he is delighted about their visit to Sussex.

‘We won’t be the only prisoner that will want to escape.’

‘You won’t hear from me for a while and therefore… well… Merry Christmas, I guess.’

DJ Mark Radcliffe, who is taking time off from presenting his Radio 2 and 6 Music shows after being diagnosed with mouth cancer.

Winter Olympics gold medallist Amy Williams reveals how back injuries and four knee ops have taken a toll on her health.