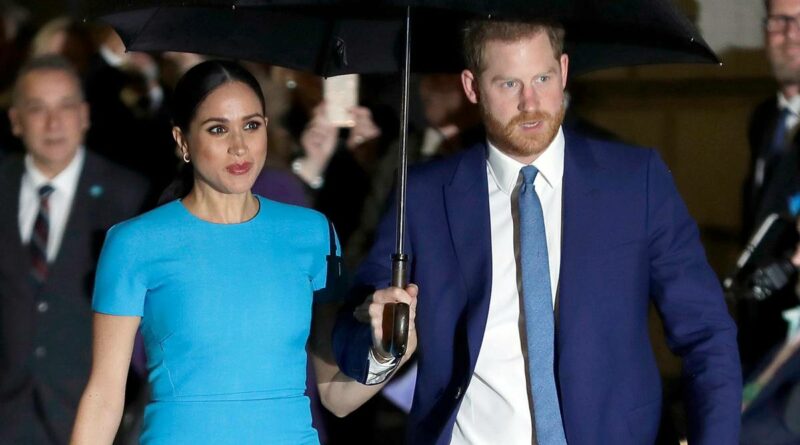 At some point, not long after marrying Prince Harry, Meghan, the Duchess of Sussex sat in the Enid Blyton-esque Nottingham Cottage (Nott Cott) in the grounds of Kensington Palace and found herself watching The Little Mermaid.

“I went, ‘Oh my God she falls in love with the prince and because of that she loses her voice,'” Meghan told Oprah Winfrey during the couple’s history-making TV interview earlier this year.

But was there a much bigger mermaid lesson that the Suits star-turned-HRH should have paid heed to here? That is, freedom comes at a price.

When Ariel is given her legs – and thus life on land – she is told that walking on them will feel like walking on knives. (Hans Christian Andersen was dark, wasn’t he?) Likewise, Harry and Meghan finally have the life they wanted but their emancipation from the royal family has come at a steep cost, both in a personal sense (Harry’s relationship with his family seems to have only fractured further) and in a far more literal sense.

Flying the coop would appear to have hit Harry and Meghan in the hip pocket – and hard.

Next month will mark an interesting milestone in the Sussex Calendar (like the Gregorian one but Oprah pops up with much more regularity) – the first full year of Harry’s life when he has had to actually pay for himself.

Emancipation comes with a price tag

In mid-August 2020, it was revealed that the couple had traded their borrowed Beverly Hills mansion to set down roots in Montecito, an exclusive beachside neighbourhood about two hours’ drive north of Los Angeles.

The couple was reported to have paid $20.9 million for a three hectare compound that came replete with saunas (two) and a Japanese tea house next to a koi pond. Just what every runaway prince needs.

The Sussexes’ purchase of the property was a landmark event for both Harry and Meghan, the first home either of them had ever owned. For the Duke, it was also the first time he had ever had to personally foot the bill to put a permanent roof over his own head.

In Harry’s first 35 years, up until Megxit, his living expenses had been pretty much looked after by the royal family, followed by the army, and then the royal family again.

Moving to the US brought with it, for the Prince, a painful crash course in having to worry about money, a lesson that most people learn before they hit the downward slope to 40 and creaky knees. Saunas (multiple), a Japanese tea house, not to mention household staff, aides, cars, mortgage payments and security cost an actual fortune.

The Daily Mail has reported that the couple paid a deposit of around $7.4 million for the home, added to which that have estimated that the duo’s household expenses would come to about $6.26 million each year including $680,000 for mortgage payments, $5.9 million for security, and $424,000 for cooks, gardeners and housekeepers. (Koi ponds don’t clean themselves.)

That Harry might actually have to find the coin himself to pay the bills, seems to have come as a rude shock to the Duke, who told Oprah, looking suitably chagrined, that his father Prince Charles had “literally cut me off financially”.

However, in June when Clarence House published their financial accounts for the previous year it was revealed that Charles had continued to financially support the couple after they finished up as working members of the royal family and up until the summer of 2020. The Prince of Wales, a Clarence House spokesman said, had “allocated a substantial sum” to help the couple make the “transition”.

Tough transition for Harry after a life of royal ease

No matter to what extent Prince of Wales might have helped Harry and Meghan start their HRH-less lives, we are still approaching the 12-month mark of the Sussexes’ being wholly responsible for picking up their own tab.

If the concept of having to actually pay for his own upkeep came as a shock for Harry, it’s understandable. Outside of the income Harry would have earned from his 10 years in the army, his family’s wealth has ensured a lifetime of ease.

Prior to Megxit, Charles’ Duchy of Cornwall estate had financed Harry, brother Prince William and the men’s families to the combined tune of $10.9 million annually, that is, about $5 million each.

So too has Harry enjoyed a lifetime of having his accommodation readily provided for him by his family at St James’s Palace, the aforementioned Kensington Palace cottage and then later their home on the Windsor Great Park estate, the PR sinkhole that is Frogmore Cottage.

Ditto the question of the family’s security.

For 35 years Harry enjoyed armed protection paid for by the British Home Office and therefore ultimately taxpayers. It does not seem to have occurred to Harry or Meghan that the government might not continue to cheerfully pick up the million-dollar plus tab for their protection when they ditched their official royal roles and life in the UK. As Harry sourly told Oprah, “I never thought that I would have my security removed, because I was born into this position.”

A title, as the Sussexes learnt after they quit, is no guarantee of an armed goon of one’s own.

(Protection of the royal family is actually handled by a specialist protection group from the Metropolitan Police, which also looks after the Prime Minister and other high-ranking officials. Decisions about who does and doesn’t get security are made by the Met’s Royal and VIP Executive Committee. Princesses Beatrice and Eugenie don’t receive state-funded security and Princess Anne and Prince Edward are only provided with gun-toting officers when they undertake official duties on behalf of the Crown).

Then there’s Frogmore Cottage, Harry and Meghan’s official UK home and throbbing sore point. In 2019 it was revealed that the renovations to the property, which the couple had chosen over the Kensington Palace residence which had been made available for them, had cost $5.93 million of Sovereign Grant money. (The Sovereign Grant is the percentage of Crown Estate profits that the British government allows the royal family to keep to pay for their official upkeep, with the rest going into the Treasury.) This very expensive reno swiftly became a cudgel which the press used to clobber the Sussexes. In September last year, it was revealed that they had repaid the full amount of grant cash used to fund the project.

Take this all together – their new home deposit, household running costs, how much Duchy of Cornwall cash they have given up, and having to repay the costs of Frogmore – and the sum totals $23.81 million.

That’s a whole lot of dough to have to find every year to keep the lights on and the family in hot and cold running bodyguards.

Now, what about all those big fat business deals they’ve signed, I hear you ask. And you’ve got a great point. Harry and Meghan stand to make hundreds of millions of dollars in the years to come based on the huge contracts they have signed with entertainment giants Netflix and Spotify. However, it’s not as if that full sum landed in their bank accounts right as the crowing press releases were sent out.

Last year, the Times reported that per industry insiders, it was “likely” that the couple would receive a retainer instead of somewhere between $1.96 and $3.92 million, earning more based on the content they produced.

No matter which way you look at it, the numbers are enough to make any accountant worth their trusty Casio break out in a cold sweat.

“Money can’t buy us happiness” as the Sussexes’ neighbour Katy Perry might sing but it sure can help when you are trying to start a new life and look after your very own a koi pond.