Home » Lifestyle » Debate sparked over why people are 'nasty' to housewives 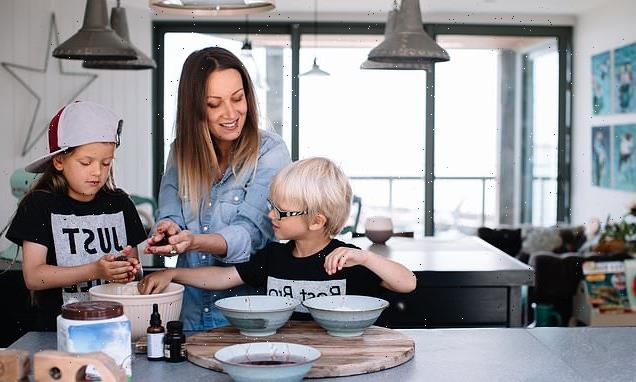 A woman has sparked an online debate after saying stay at home wives and mothers are often the target of vitriol – prompting some to say they would be ‘devastated’ if their offspring chose not to work.

The anonymous, UK-based poster took to parenting forum Mumsnet to garner opinions on the divisive topic by sharing a post titled [Am I being unreasonable] to not understand the nastiness that being a housewife provokes.

She wrote: ‘Not just on Mumsnet. I don’t even use Mumsnet that often but I see this on other social media websites too.

‘If a woman shares something positive about being a housewife it’s full of comments about how “being controlled by a man, couldn’t be me!” “No thanks, I love my independence” or “just wait until he leaves you, then what”. 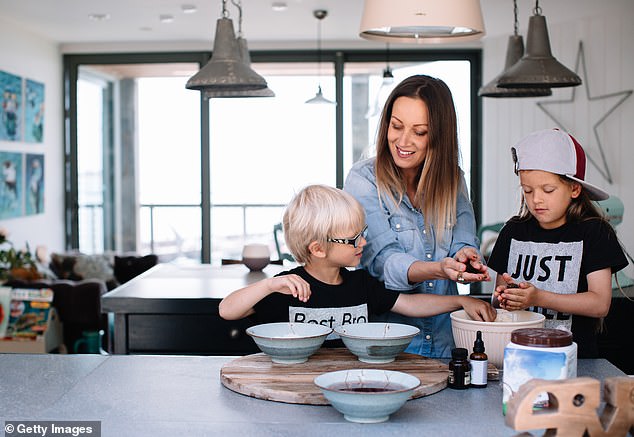 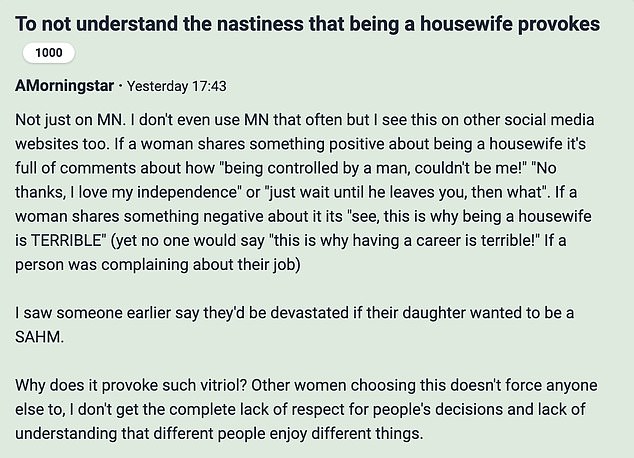 The poster noted that she was curious about attitudes towards both stay at home mothers and wives, despite many having different feelings about those who stay home without children to care for

‘If a woman shares something negative about it its “see, this is why being a housewife is TERRIBLE” (yet no one would say “this is why having a career is terrible!” If a person was complaining about their job).

‘I saw someone earlier say they’d be devastated if their daughter wanted to be a stay-at-home mother.

‘Why does it provoke such vitriol? Other women choosing this doesn’t force anyone else to, I don’t get the complete lack of respect for people’s decisions and lack of understanding that different people enjoy different things.’

The post sparked a mixed response, with a number of forum users questioning the assertion that stay-at-home women and mothers are the recipients of such vitriol, with some noting that working mothers are also criticised. 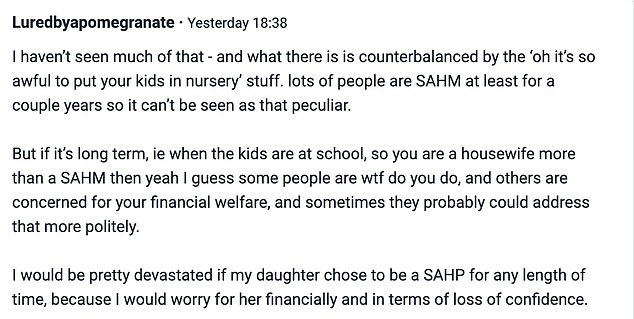 Several forum users questioned whether stay at home wives and mothers are subject to such vitriol, while others suggested women face judgement whatever their choices

One wrote: ‘Who is being nasty? There are more posts complaining about the nastiness than the nasty posts themselves?’

Another added: ‘I have mainly been a SAHP/housewife for the last 25 years and have never received any funny comments from people. My DH was fortunate to be able to retire at 55 and now neither of us work.’

And a third said: ‘I haven’t seen much of that – and what there is is counterbalanced by the ‘oh it’s so awful to put your kids in nursery’ stuff. lots of people are SAHM at least for a couple years so it can’t be seen as that peculiar.’

However, some agreed, suggested that the poster was right, and that those who stay at home – either as wives or parents – often are criticised. 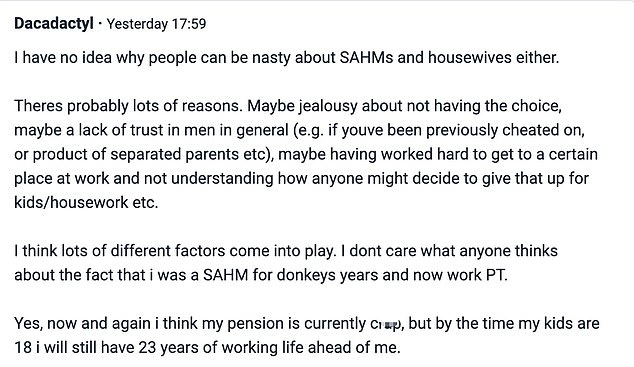 One wrote: ‘I have no idea why people can be nasty about SAHMs and housewives either.

‘Theres probably lots of reasons. Maybe jealousy about not having the choice, maybe a lack of trust in men in general (e.g. if youve been previously cheated on, or product of separated parents etc), maybe having worked hard to get to a certain place at work and not understanding how anyone might decide to give that up for kids/housework etc.’

Another said: ‘Apparently I’m both a terrible person and a victim for being a housewife/SAHM. I do everything for my husband including laying out his clothes in the morning and preparing all his meals. He rarely cooks or cleans but has a list of jobs I can’t do that he does. But apparently I’m being abused by him. I chose and still choose this life! And I get to spend his money in return.

‘I find the people most upset are usually the bitter ones who want to be traditional but can’t/won’t.’

And a third simply said: ‘It’s jealousy (but they’ll never admit it).’ 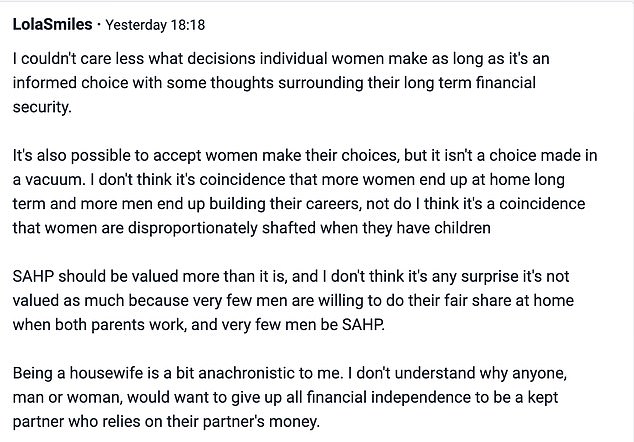 A number of respondents admitted they would be devastated if their offspring chose not to work, and instead be dependent on a partner

Others suggested that a lot of negativity around women staying at home was likely to be coming from a place of concern around such people being reliant on their partners, and missing out on the potential fulfilment of working.

One admitted: ‘I voted that you are not being unreasonable, but I would be devastated if my daughter wanted to be a housewife. Kids are young for such a short time and e benefit from socialization. In addition, work can be so satisfying and affirming. I was able to work part-time when my kids were little and then full-time. My husband was a high earner and he left me after 16 years of marriage. I think I would have died if I did not have the support, routine, and continuity of work, never mind the pension it allowed me to save. In the modem world sahm make themselves extremely vulnerable.’

Another added: ‘The way you’re describing it is over the top and I agree each to their own but I agree with the poster who said she’d be devastated if her daughter chose that path. It’s a path I would never consider for myself either. Only because living on someone else’s whim fills me with dread.’

And a third wrote: ‘If my kids remain healthy, I would hate for them to be financially dependent on a partner. I hope neither my son nor daughter end up as sahps. I also think it’s a sexist construct as there are still way more sahms than sahds. It contributes to the gender pay gap and inequality which I hate. It’s a hugely vulnerable position in the long term, however much protection people think they have put in place.

‘On an individual basis, I get why some people end up having to choose the sah role. And I love my sahm friends as much as those who work. My opposition to the sahm role is nothing personal.’