Delia Smith’s ’70s cookery shows become surprise lockdown as viewers marvel over how meat was expensive, hummus was an unknown delicacy and salad was in short supply in winter

Lockdown has seen people across the country embrace cooking and baking like never before, and the appetite for food programmes is stretching all the way back to Delia Smith’s vintage offerings from the ’70s.

Delia Smith’s Cookery Course, which is avaialble on iPlayer, has attracted a new generation of viewers intrigued by how much things have changed in the past 50 years, as well as picking up tips that have stood the test of time.

In the show, the Woking-born chef, now 79, advises using lentils as a subsitute for meat, which she said would only become more costly, and introduced viewers to delicacies such as hummus.

It’s sparked a lively thread on Mumsnet, where cooks discussed their memories form the time, with many saying that they rarely ate cuisine from other countries and that meat was only for special occasions because it was too expensive. 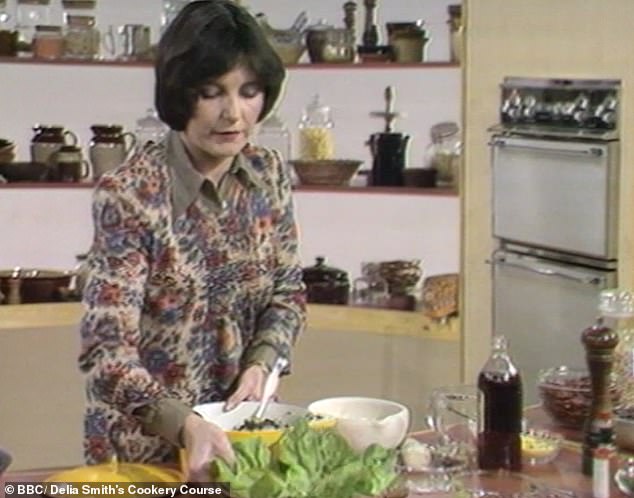 People from across the UK have been discussing how cooking has changed since the 1970s, after watching Delia Smith’s Cookery Course (pictured) on BBC iPlayer 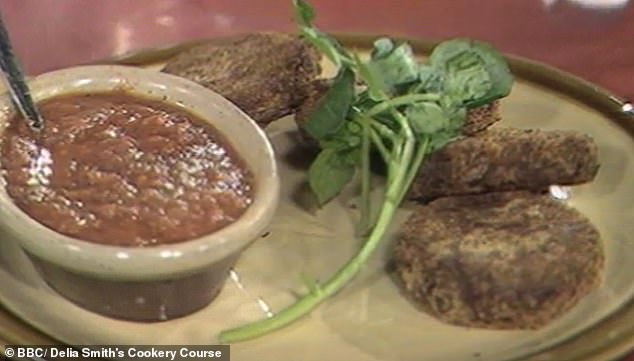 Delia shared a selection of recipes (pictured) in her cooking show, while urging viewers to take tips from ‘poorer’ countries for dishes such as lentil rissoles with tomato sauce

In an episode about Pulses, Delia describes beans and lentils as ‘the future’, saying: ‘If you’re eating a balanced diet, pulses can offer you the same amount of protein as meat at a fraction of the cost.

‘They’re going to play a very important in our diet in the future because meat is becoming more expensive and also becoming much more scarce.

‘We can take a tip from some of the poorer countries in the world who do really delicious recipes with pulses.’

She explains the history of chickpeas being from Greece, adding: ‘Sometimes in salads and a puree, which is called Humus’ 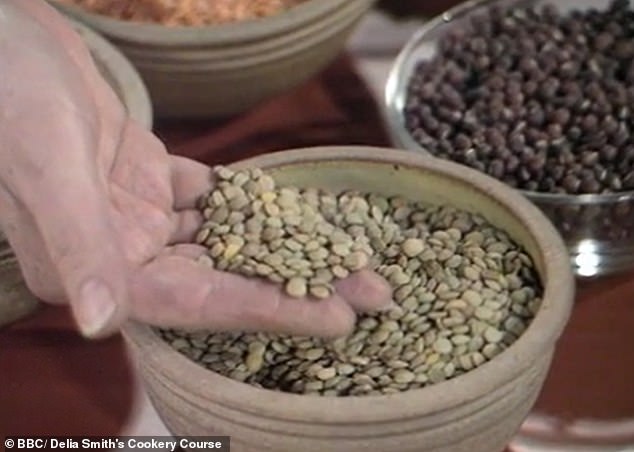 In one episode, Delia explains the importance of pulses (pictured) as an alternative to meat and describes them as the future of food 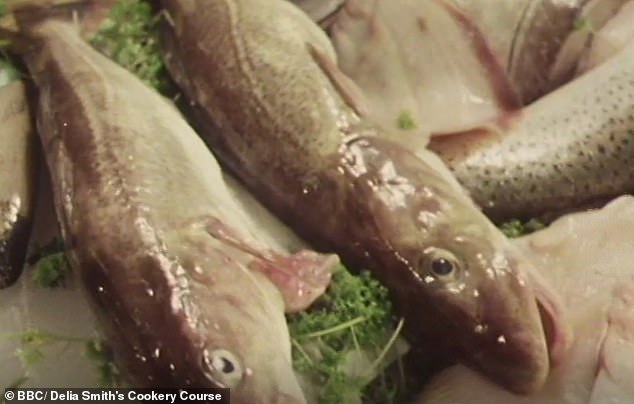 In another episode, Delia visits a fishmonger who advises eating fish (pictured) the same day its bought or the next day at the latest

While we’re used to having access to whatever food we fancy all year around, importing ingredients from around the world, in the ’70s seasonal availability was much more prevalent.

The cook demonstrates her recipe for a red kidney bean salad, saying: ‘It’s very good for the winter months when there aren’t as many salad ingredients available’

In another episode, Delia also shares her advice for cooking fish and is told by a fishmonger to eat the produce on the same day it’s bought or the next day at the latest, because not all homes in the UK had freezers at the time. 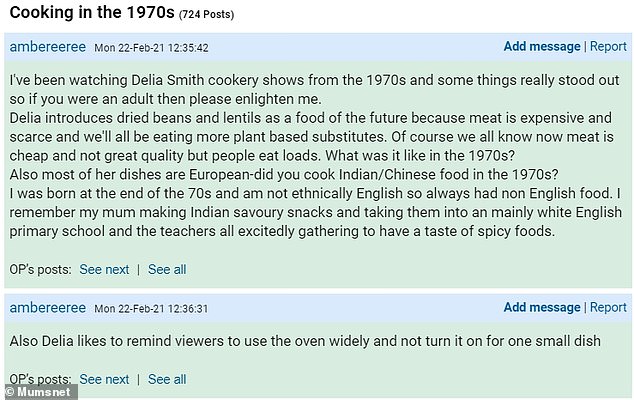 Posting on Mumsnet, a woman who has been watching the cookery show sparked a discussion about people not cooking foreign foods

Discussing the show on Mumsnet, one viewer person wrote: ‘Meat might be relatively cheap now but it was very expensive in the 70s, especially chicken. That was a Christmas-only treat when I was a child. We did have meat but not at every meal.

‘And no, fancy foreign foods were rarely cooked at home. Hell, we rarely went to restaurants at all. I remember my first visit to a Chinese restaurant as a child, that’s what such a rare treat it was. Also etched into my mind was the first time I had fresh salmon, asparagus and avocado.’

Another said: ‘I think it’s difficult to imagine what a difference widespread ownership of freezers made to the purchase and storage of perishable products (e.g. meat).

‘We didn’t get a freezer util the early 80s and going to somewhere like Farmfoods/ Iceland to stock up on cheap burgers & findus crispy pancakes etc was the equivalent to an Ikea opening up near your town in the 90s.

‘In the 70s our meat consumption was almost exclusively mince or sausages and a roast dinner on a Sunday was a treat with leftovers eaked out.

Many people said throughout the Seventies they mostly ate fish and chips, because a Chinese takeaway was too expensive

However, others said they did eat meat regularly but it would be cheap options and gushed that Delia revolutionized their cooking.

‘We were so excited by Delia’s programme. It made cooking interesting and accessible. The books came out in three volumes and we were so excited when they were published. Her all-in-one sponge was a game changer. I still use her recipes as I love so many of them.

‘I occasionally cooked Indian, but no ready made sauces then so I had a collection of spices. Some were really hard to find. Chinese was very difficult from scratch which was the only way. It was easier to buy from the Chinese restaurant where lurid colours were used. Obviously there were no ready meals unless you count Frey Bentos tinned pies.

‘We cooked pasta, but not pizza. I made steak and kidney pies and puddings. Steak, chops, gammon steaks and macaroni cheese. I didn’t use herbs or garlic. I didn’t eat a mushroom until I was an adult. There were no courgettes or aubergines available out of London. We were expected to be stay at home mothers so we had the time for shopping and cooking. I got my first freezer on the day my first baby was born. It arrived as I went into labour,’ one wrote.

Others gushed that Dalia revolutionized cooking, revealing they would only eat meat on special occasions because of the expense