No one’s confident all of the time — and that’s true whether you’re a regular person or a famous pop star. Demi Lovato’s Instagram message about self-love will likely resonate with many of her followers, no matter where they are on the journey to self-acceptance and confidence.

In two images on her Instagram Story on Thursday night, the "Sober" singer reminded her fans that all of them are "worthy of love." She wrote on her first slide, "Women appreciation post: All women are beautiful! Every shape, every color, every size." With her second slide, Lovato got a lot more personal, reminding everyone that even she isn’t confident all the time. The singer wrote,

Her words show some of the vulnerability she’s come to be known for, and it’s nice to see a celebrity staying real with her fans.

Lovato’s comments comes at a great time, too. The start of a new year can bring an influx of ads for diet products or exercise tips that may be triggering. And while there’s nothing wrong with setting intentions and making resolutions for the new year, it’s worth remembering that you’re already worth plenty. 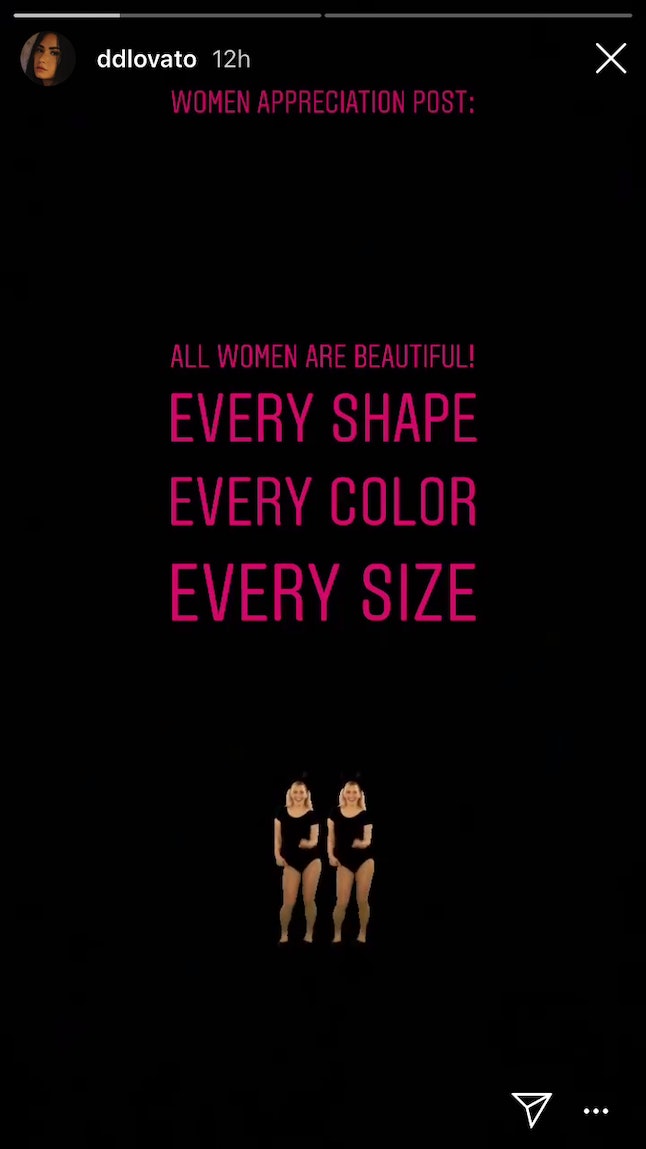 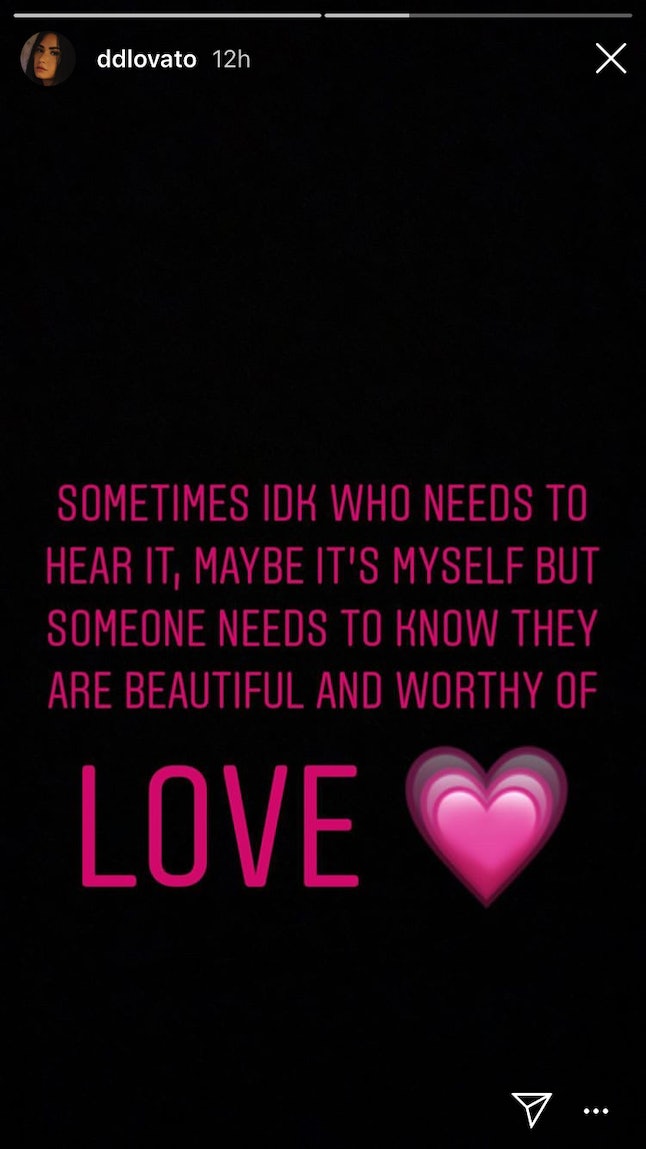 The "Confident" singer has never been shy about self-acceptance and all of the struggles she’s gone through over the years. Last January, Lovato tweeted about food-shaming, sharing that she was "no longer depriving myself of treats." She’s been open about her struggle with eating disorders in the past, too. It’s an uphill battle, but it’s an important one, and one that’s clearly close to her heart.

"I’m not gonna lie, I put on a couple lbs since I’ve given up dieting BUT I’ve given up the chronic stress of what I eat because I don’t want to set that example for my fans," Lovato tweeted last January. No more food shaming myself!!"

Lovato also took Instagram to task last week, pointing out a fat-shaming ad she’d seen on the site. The image, which was promoting a digital game, showed two characters side-by-side labeled "obese" and "pretty." The singer called the ad "harmful to anyone who is easily influenced by societal pressures" in her Story at the time.

And in addition to discussing body image, the star has also been open about her sobriety and her own journey. After she was hospitalized last summer, Lovato shared a post about her struggle with addiction, writing that "this illness is not something that disappears or fades with time."

The honesty of her message resonated with fans, who supported Lovato as she entered treatment at a rehab facility. The singer reportedly returned home to Los Angeles after three months of treatment, according to People. She’s mostly been keeping to herself since then, though she’s shared occasional updates, like the tweets below, with fans on social media.

Lovato is an open book regarding so many aspects of her life, and that’s made her a role model for countless people. Her latest Instagram Stories are a reminder that it’s totally normal to struggle with body image, because it affects everyone. But at the end of the day, you’re worthy of respect and love, no matter what your body looks like, and it’s nice to know that the singer is telling herself the same thing.

Canada's Trudeau, backed by rivals for now, has little chance to cash in on popularity boost