Derek Hough has been a longtime staple of Dancing With The Stars. But, though there will be plenty of famous faces on the show’s newest season, his won’t be among them. So why isn’t Derek Hough on Dancing With the Stars in 2018?

It doesn’t seem like there’s any big dramatic reason — he’s just busy with other things and hasn’t been on the show in a while. He hasn’t stepped away from the world of dancing as a whole, though. He appears as a judge on NBC’s World of Dance these days, along with Jennifer Lopez, Jenna Dewan, and Ne-Yo, who are all dancing legends in their own rights. And, this isn’t the first time he’s stepped away from the role at Dancing With the Stars. Hough has said in the past that he was done with the show, but he still ended up returning eventually. Last year, he also told Entertainment Tonight that he would consider coming back to the stage for certain celebs who wanted to work with him.

"I heard a rumor that Celine Dion was doing it, and I was like I would definitely come back for Celine Dion," he said. "She’s legend status. Icon status." So, while he seems occupied with other things right now, there definitely doesn’t seem to be any bad blood between Hough and the long-running competition show, so the door is likely open for him to return if he chooses. 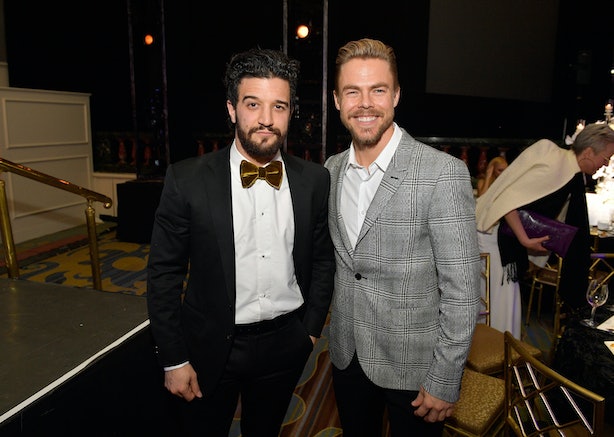 World of Dance isn’t the only thing keeping Hough busy during his time away from DWTS, either. Late last year he directed his own music video for "Hold On," a song that shed some light on his own feelings about the importance of mental health. He told Billboard that the deaths of both an uncle and Linkin Park frontman Chester Bennington inspired him to dig deeper into the issue. He said that learning about the actual statistics prompted him to produce the song.

He echoed those sentiments in an interview with Parade — Hough wants more people, especially men who might feel more societal pressure to hide their emotion, to be comfortable talking about their mental health and reaching out when they need support. "I’ve seen how [my sisters] talk about their feelings and boy, do they feel better about it after they talk about it," he said. "I think that with guys, we’re definitely apprehensive and we feel ashamed about talking about our emotions and our feelings and especially when we’re going through difficult times. I’m encouraging men out there to talk about it."

Whatever he does next in addition to his current projects, Hough said all that’s really important to him is providing some kind of entertainment and connecting with people through those methods. "I’m here to serve. Even if it’s just fun pure entertainment where I’m being silly or if it’s a serious subject or if it’s an emotional subject, whatever it might be, whatever color that I’m sort of giving out, for me it’s all about getting it and sharing it," he told Billboard in the same piece. "If I can evoke emotion from somebody, whether it be a happy emotion, or laughter, or something more serious or more emotional or personal, then for me that’s what I’m here to do. That’s my purpose."

So, if you miss Hough during his absence from DWTS, at least there’s definitely no shortage of ways to connect with him through his other important work.