Meet the woman who went from dressing Del Boy to styling the sexiest killer on television: Costume designer behind BBC1 thriller Killing Eve has won legions of fans for her fashion creations

It’s the spy drama with a twist that has got the nation hooked – a thrillingly addictive and darkly witty game of cat-and-mouse played out across Europe between a bored MI5 officer and a beautiful, psychotic assassin with a wardrobe to die for.

The BBC1 thriller Killing Eve has won rave reviews and impressive viewing figures thanks to its depiction of two compelling female characters who become obsessed with one another.

Yet it is the show’s unique sense of style, created by veteran British costume designer Phoebe de Gaye, that has most obsessed viewers. 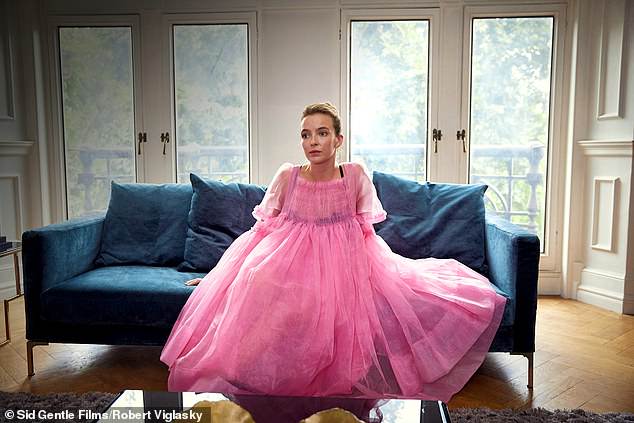 With Vogue hailing Killing Eve as ‘the most fashionable show on television’, it’s a far cry from Phoebe’s first ever job – as a designer for the BBC in 1981, in which she helped conceive the appearance of Del Boy Trotter, complete with flat cap and sheepskin coat, for the pilot episode of Only Fools And Horses.

Phoebe herself acknowledges that it is a big leap from Peckham’s finest wheeler-dealer to the lavishly sophisticated world of Killing Eve. ‘It’s certainly very different,’ she laughs.

And while Killing Eve’s stars Jodie Comer and Sandra Oh are mesmerising, there is no doubt that the show’s legions of fans are lusting after every detail of the extraordinary high-end looks Phoebe has created for Jodie. The 25-year-old Liverpool-born actress has become an instant fashion icon in her role as ruthless Villanelle.

In her day job as an international assassin, she constantly changes her appearance, from androgynous to feminine, business-like to frivolous. In private, Villanelle is shown spending her vast pay cheques on quirky designer ensembles, such as the frothy cloud of bubblegum-pink tulle that she pairs with biker boots to create the series’ most memorable look. 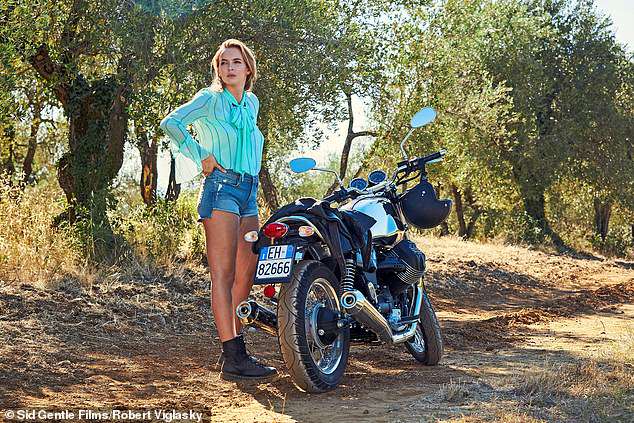 British Vogue even hailed the spy drama the ‘most fashionable show on television’ (pictured, Jodie Comer)

In reality, of course, they are all the vision of stylist Phoebe, who over the years has also worked on a variety of shows, including Lark Rise To Candleford and The Musketeers, for which she won a Bafta.

Early last year, one of Killing Eve’s producers, who had worked with Phoebe on The Musketeers, asked her to apply for the role of costume designer on the spy series.

Phoebe received the script by Phoebe Waller-Bridge, the actress and writer who recently found success with the dark BBC comedy Fleabag. She then prepared mood boards based on how she envisaged the two lead characters.

‘The main task was to show the contrast between Villanelle and Eve,’ says Phoebe.

‘Eve isn’t interested in how she looks at all, whereas Villanelle is excited by clothes and uses them to reward herself after a kill.

‘I remember that originally, the scene where she kills the Mafia boss in the first episode was going to be set in an opera house, with Villanelle leaping from one box to another. I suggested she’d wear a ballgown because I liked the idea of her in a very feminine dress, killing people.

‘The scene changed for the final version, but that original idea ended up translating into some of the other outfits she wears throughout the show.’

When Phoebe got the job, she didn’t yet know which actresses would be cast but she was delighted when Jodie won the role of Villanelle, as they had worked together the previous year on period drama The White Princess.

‘She’s fantastic fun to work with,’ she says. ‘She’s very normal and full of life but also very focused and professional.

‘Villanelle is the perfect role for her. With some actresses, you might need to persuade them to wear something, but Jodie just tries on whatever you’ve got on the rail and prances around in the changing room in it.’

The famous pink frock, which Villanelle wears to an appointment with a psychotherapist, was described in the script as ‘a big, pouffy dress’.

Phoebe thought immediately of a dress she had spotted in London’s Dover Street Market by the British designer Molly Goddard. ‘I thought, “Oh yes, that would work” because it has that naughty-little-girl look, but also a slightly subversive element,’ she says.

The styling of it – with a pair of punky Balenciaga boots and a visible racer-back black bra – lent its frothy confection a darker edge, which hinted at Villanelle’s own darkness. 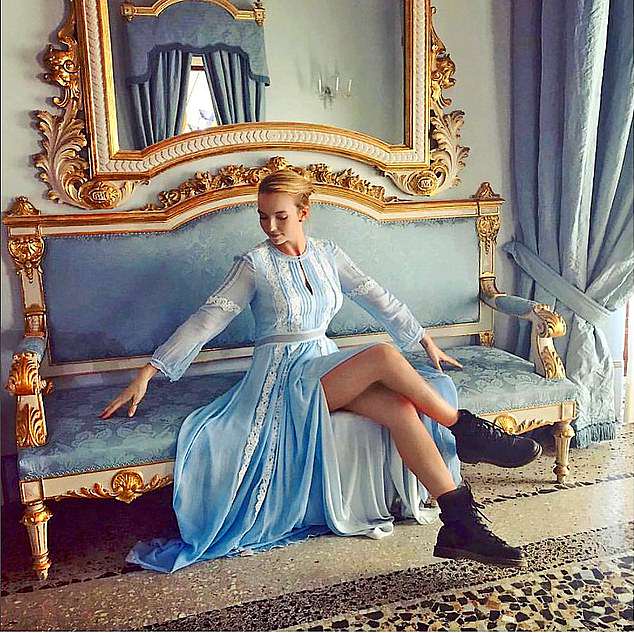 Scriptwriter Waller-Bridge was very hands-on when it came to the fashion used the series.

‘She was at the fitting for the pink dress,’ says Phoebe. ‘When she saw it, she thought maybe we could pouf it out even more. So we made a petticoat to go underneath it to make it stick out that bit more.’

One of the earliest scenes to be filmed during the six-month-long shoot was of Villanelle climbing up the wall of a grand Tuscan house to murder a Mafia don using an ornate pin taken from her own hair. She wears a tiny pair of denim shorts teamed with black boots.

‘There was a stuntwoman lined up to do it, but the shorts we’d got for her were too small. We were terrified, but then Jodie turned up and shinnied up the wall herself in one take. We were extremely relieved.’

Another favourite of Phoebe’s outfits for Villanelle is the suit by Belgian designer Dries van Noten that she wore during a blood-soaked visit to a nightclub in Berlin in last night’s third episode. It’s androgynous, with a bold harlequin print, and a complete contrast to the ultra-feminine pink number. 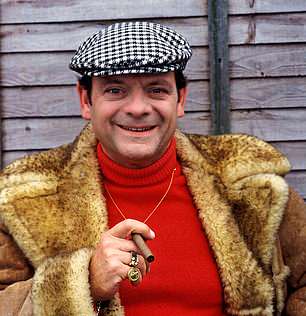 ‘Villanelle has a chameleon-like personality and you never know what she’s going to end up wearing next,’ Phoebe says. ‘I hoped it was going to be a constant surprise to the audience.’

The shoot also took the entire team to Bucharest, as well as Paris, where Villanelle lives.

Phoebe did lose one battle with the producers over an item of clothing she desperately wanted Villanelle to wear.

‘When she visits the English countryside, they wanted her to wear a Barbour jacket, and I wanted to put her in a very stylish designer camouflage anorak. They wanted her to be more low-key, so I had to sadly relinquish it.When I watched it back I did think, “I wish she’d been wearing that anorak instead.” ’

‘Before I knew who was playing the part, I’d imagined Eve as someone who had slight weight issues, whose buttons kept coming undone without her noticing, but Sandra isn’t like that at all – she’s a very precise and elegant person,’ Phoebe says. ‘We bought clothes for her from charity shops and high street places like Uniqlo. We would put her in some terrible stuff and she’d still look too smart.’

Phoebe came up with a solution to help Eve achieve the careless look they wanted.

‘We used to keep the clothes stuffed in bags, all crumpled up, so when she came to put something on it would look a bit scruffy.’

During a key scene in which the two women finally come face to face, Eve wears what Phoebe describes with delight as a ‘terrible top’, which one of her two assistants unearthed in a charity shop in Hastings, East Sussex.

‘It’s a sort of all-in-one blouse and jumper – a jumper with a collar and shirt-tails attached,’ she laughs. ‘Villanelle comments on it because it’s so awful.’

Sandra does get one big high-fashion moment when she wears a sexy, figure-hugging black and white Roland Mouret cocktail dress in next week’s episode.

Of course, there is a twist, which we won’t reveal, but Phoebe says it was gratifying to be able to dress the 47-year-old actress in something flattering. ‘She looked amazing in that dress – she’s got a lovely figure,’ she says. ‘It’s great to have that moment in contrast to everything else she wears.’

It may be Villanelle’s outfits that have hit the headlines but her spacious, light-filled Paris apartment has also sent design enthusiasts wild, inspiring social media posts and blogs devoted to its artfully distressed wallpaper, mismatched furniture and stunning views of Montmartre.

Yet remarkably, it’s not an actual apartment at all.

Kristian Milsted, Killing Eve’s set designer, reveals that what looks like a dream property in Paris is a set he built in a TV studio in Hayes, West London.

‘It’s all smoke and mirrors,’ he admits, laughing. ‘The walls are built from plywood and timber.’

Kristian, who has also worked on films including 2016’s The Girl With All The Gifts, thought deeply about the kind of place Villanelle would live in before creating the flat. ‘She’s a fascinating character – young and wealthy, but also a psychopath,’ he says.

‘She’s got the money to live somewhere very stylish, but she’s not a home-maker so it needed to be slightly dilapidated, with a sense of the history before she moved in.

‘We built holes in the walls to give them that aged look and used original wallpaper to make it look authentic. The bathroom was an original 1930s suite. Then we added furniture and art.

‘We tried to give it a bit of an edge, a bit of darkness.’

Eve’s cluttered house was also a set, which Milsted filled with ordinary, well-worn furniture in dull colours to reflect the mundanity of her life.

‘We wanted to show a woman a little bit trapped, longing for something else,’ he says.

Sandra is a big star in the US, thanks to her role in Grey’s Anatomy. ‘She isn’t grand at all, though,’ says Phoebe. ‘She’s very decisive and focused, but also a brilliant clown, very funny.’

Early on in the production, Sandra asked Phoebe if she could find her a piece of jewellery to help her create Eve’s character.

‘She thought it would be nice if Eve had a ring that had been passed down through her husband Niko’s family. I found a little ring at home which had been a great uncle’s and she wore it throughout filming.’

The second season is currently being made, but Phoebe is working on other projects.

‘I got a call from the new costume designer asking where this ring Sandra kept mentioning was, and I couldn’t remember what I’d done with it.

‘I looked at home, drove three hours to the Cotswolds to check the lock-up where I keep costumes, and eventually found it in a bag in Bristol, where I’d been filming.

‘When Sandra got it back it was important for her. I find it interesting that actors can sometimes fix on a prop or piece of clothing as a key to getting into their character.’

Phoebe is thrilled to have been a vital part of such a big hit, both here and in the US, where it aired earlier in the year.

She says: ‘You never know what people are going to respond to, so for me, it was just about enjoying the shoot. It was fantastic fun.’