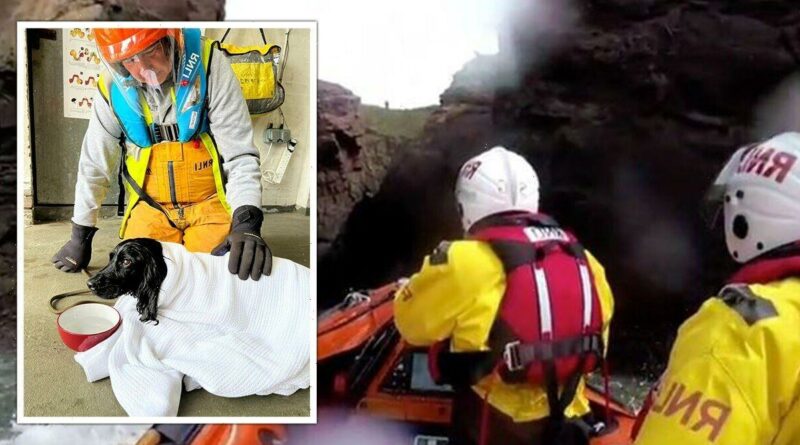 Skye, a black cocker spaniel, had a narrow brush with death at Arbroath cliffs near Dundee, Scotland on Thursday. A volunteer crew received an assistance request from her owner after the pup chased a ball belonging to another dog before falling off the cliff.

The dog had become trapped in the rocky gully within the cliffs after falling into the sea.

Skye was able to make her way to this rocky terrain but remained out of reach from her owner.

It was at this point the RNLI were called for assistance and the team hurried out to rescue the pup.

Michael Marr and his team of volunteers launched their boat and headed to the cliffside before carefully steering as close to the narrow gully as possible to search for Skye.

The width of the gully was narrower than the lifeboat, so a member of the volunteer crew entered the water on a swim line, from which he could approach the pooch.

In a video showing the rescue, poor Skye can be seen cowering in fear while waiting for a volunteer to reach out to her.

A member of the RNLI team then places a safety harness on her before picking her up to bring her aboard their speedboat.

Once safely held inside the boat, the team notified the relieved owner over the phone before returning to shore to perform a check on the rescued dog.

Skye was well cared for by RNLI staff until her owner was able to retrieve her.

After a heartfelt thank you to the crew, Skye and her owner were off to the vets for a thorough check over.

In a statement Michael praised the actions of Skye’s owner, noting that no members of the public should attempt to climb down the cliffs to perform such a rescue mission themselves.

He also advised dog owners should keep their pets on leads in this area to prevent any further incidents like this.

He said: “We were pleased to be able to rescue Skye today and that the owners did the right thing by calling for assistance, and not trying to climb down the cliffs where they could potentially become a casualty themselves.

“Skye was very unlucky in that she found and chased a ball that wasn’t even hers!

“However, the RNLI always advise dog owners keep their dogs on the lead around cliffs to prevent these incidents occurring.”

Footage of the volunteers’ work to bring the dog back to safety was shared on social media and many complimented the team on swift actions.

On Facebook, one wrote: “Excellent job, good local knowledge of the area.”

While another added: “Aww brilliant, well done guys. Hope Skye is none the worse of her wee ordeal.”

One more commented: “Well done guys, you are a real credit to the community.”

The RNLI volunteers provide a 24-hour search and rescue service.

Over 230 lifeboat stations are operated in the UK and Ireland.

There are more than 240 lifeguard units on beaches around the UK and Channel Islands.