DOMINIC LAWSON: He may think he’s been clever, but Oliver Letwin’s clumsy meddling will never be forgiven

When he was 14, staying at a friend’s house, Oliver Letwin broke the garlic press. He had been trying to crush walnuts in it. The friend’s mother aptly summed up the young Oliver: ‘Lovely boy. No common sense.’

At the age of 63, Sir Oliver (as he now is) has no more common sense than he did as an adolescent. But when his cack-handed experimentation threatens to break not a replaceable kitchen tool but our very system of government — and also injects yet more poison into the relationship between Parliament and the people — it doesn’t matter how lovely he is as a person, he will still not be forgiven.

For that could be the effect of the amendment in his name, passed in an extraordinary Saturday session of the House of Commons at the weekend. 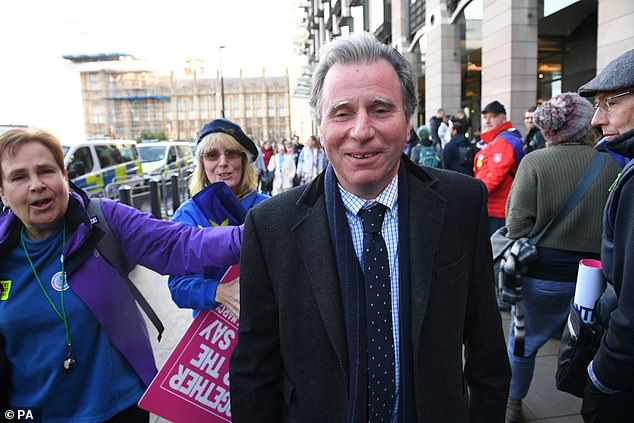 When he was 14, staying at a friend’s house, Oliver Letwin (pictured in Parliament Square on Saturday) broke the garlic press. He had been trying to crush walnuts in it. The friend’s mother aptly summed up the young Oliver: ‘Lovely boy. No common sense’

This amendment rendered meaningless the Government’s attempt to pass a ‘meaningful vote’ on its Brexit deal, by deferring any such approval until all stages of the same deal (in the so-called Withdrawal Agreement Bill) had been passed.

Still, I can vouch for Letwin’s niceness as a person. I first came across him when he was the co-editor of a joint Oxford and Cambridge university publication called Definite Article, for which I wrote.

He has always been devoid of any unkindness, still less malice. If he has fierce ambition, it is driven purely by a passion for ideas and to improve the way things work.

Unfortunately, the net effect of Letwin’s intellectual tinkering in the field of politics (which he entered after a dalliance in the academic field to which he is suited) has been simultaneously sizeable and pitiful.

As a young adviser to Margaret Thatcher he was more responsible than anyone (apart from her) for pushing the disastrous idea of the Community Charge, otherwise known as the poll tax. My father, who was then Chancellor of the Exchequer, fought a losing battle to block the whole thing. 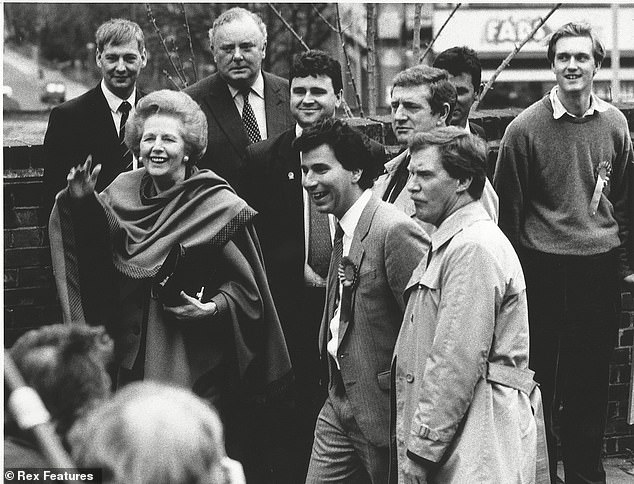 As a young adviser to Margaret Thatcher (left) Letwin (centre) was more responsible than anyone (apart from her) for pushing the disastrous idea of the Community Charge, otherwise known as the poll tax. My father, who was then Chancellor of the Exchequer, fought a losing battle to block the whole thing

Papers released five years ago record my father warning the rest of the Cabinet in May 1985 that the poll tax would be ‘completely unworkable and politically catastrophic’, and describing the ‘horrifying picture of the impact … a pensioner couple in inner London could find themselves paying 22 per cent of their net income in poll tax, whereas a better-off couple in the suburbs pay only 1 per cent’.

But Oliver, ever intellectual and never practical, remained seduced by the prize of abolishing the complex rates system in one fell swoop, and fought off my father’s attempt to scupper the tax with the proposal that it first be launched only in Scotland, as an ‘experiment’.

That turned out well, didn’t it? The Scots were driven to believe that they were being singled out for special punishment by heartless Tories. Meanwhile, this led not to ‘an absence of any turbulence on the English domestic front’ as Letwin advised the Prime Minister, but to the riots which, more than anything else, presaged her political annihilation.

I mention this not in pursuance of any family feud (there isn’t one) but to illustrate how Oliver is, despite his prodigious intellect — or rather because of it — entirely naive in the field of human behaviour. 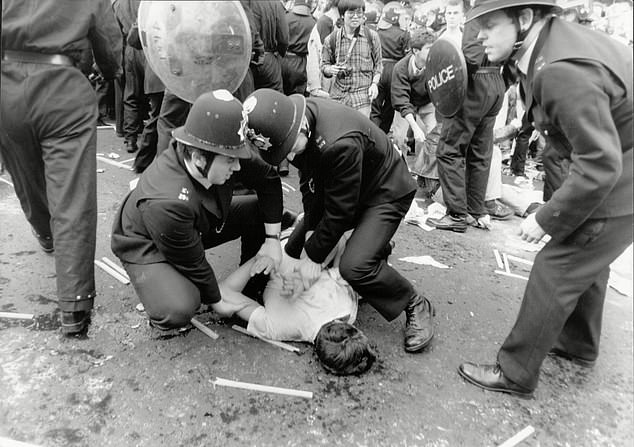 Papers released five years ago record my father warning the rest of the Cabinet in May 1985 that the poll tax (pictured, during a riot in March 1990) would be ‘completely unworkable and politically catastrophic’

This, after all, is the man who let two burglars into his home at 3am after they told him they wanted to use his loo. Good politics is fundamentally about understanding people: what makes them tick, or — in the case of the poll tax — explode.

He insists that the sole purpose of the amendment voted on at the weekend is to prevent the chance of a ‘no-deal Brexit’, which he regards as unconscionable.

He was morbidly anxious that this could happen if the Johnson deal was passed on Saturday, but if Parliament then failed to vote through the subsequent passage of the Withdrawal Bill before October 31, the date of our scheduled departure from the EU.

Well, that was theoretically possible: but the prospect of no deal is perhaps the only threat the Government has that would stir sufficient numbers of Labour MPs to defy their whips and actually support the legislation.

Bizarrely, in the circumstances, Letwin himself declared that the text of the Withdrawal Agreement between the Government and the EU was ‘admirable and I shall be supporting it and indeed voting for it all the way to completion’.

I wonder how he felt when he heard the massed ranks of the anti-Brexiteers outside Parliament chanting: ‘Oh, Oliver Letwin’ in the way Jeremy Corbyn’s most idolatrous supporters sing the Labour leader’s name. In fact, Letwin could be seen grinning goofily as he was embraced by one of those campaigners.

And I wonder how he felt when he saw members of Labour’s front bench scarcely able to contain their delight when the tellers announced that the Letwin amendment had passed.

Does he realise that, by forcing his old colleague Boris Johnson to write a hostage’s letter asking the EU for a three-month extension — another one! — to our membership, he is giving sufficient time for all manner of delaying tactics in Westminster, including the possibility of a general election before Brexit is achieved?

Not that an election would be in itself bad for the Conservatives. The trouble is, the PM is not in a position to go to the Queen to put this hopeless, bitter, indecisive Parliament out of its misery and call an election. He can instead be kept hanging on impotently until 2022, with no majority to achieve anything.

That is because of the Fixed-term Parliaments Act, which requires two-thirds of MPs to vote for any dissolution. And which genius dreamt up that scheme in 2010?

You’ve got it: Oliver Letwin, who designed this dreadful piece of legislation as a means of satisfying the requirements of the coalition deal that his former boss David Cameron struck with the Liberal Democrats.

Cameron relied hugely on Letwin, who is ten years older than him. (I once had lunch with Oliver when his mobile rang, and it was the then-Prime Minister calling from China. ‘It’s the young master,’ Oliver told me, with his characteristic high-pitched giggle.)

In fact, Cameron appointed him to head a new Brexit unit the day after the country voted Leave, but Mrs May fired Letwin as soon as she became Prime Minister. Who knows what wacky Brexit ideas he would have come up with if she had retained Cameron’s very own Professor Branestawm? 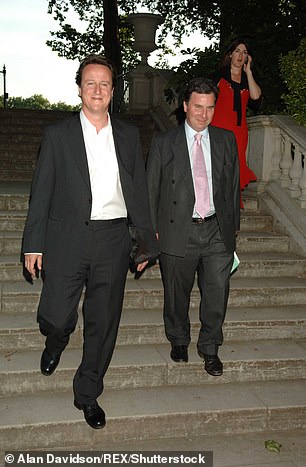 Cameron relied hugely on Letwin (pictured together in 2006), who is ten years older than him

But it was in the last week of the referendum campaign in 2016 that Letwin came up with possibly his dottiest proposal.

Downing Street was looking for some way of pulling a political rabbit out of the hat, to staunch the ebbing of support for Remain. As a friend who was one of that inner circle told me: ‘Oliver said that we should ask Mrs Merkel and Mr Hollande to come to the UK and make a big promise of free energy if we vote to stay in the EU.’

Leave aside the lunacy of thinking that British voters would be swayed by what the German or French leaders advised us to do (we did not greatly welcome President Obama’s intercession in the campaign): how on earth would Cameron ever have persuaded those two to come up with such an implausible offer?

I was tempted to believe that my friend was pulling my leg. But then I recalled he was talking about Oliver, so anything could be expected.

I say this with a degree of affection, even though I could not term Oliver a friend. But I am also genuinely angry that his actions have made it much more likely that continued parliamentary foot-dragging over honouring the result of the referendum will make it the fourth year that the country’s families will sit down for their Christmas lunch without knowing their destiny.

That is truly unconscionable. And if the result of Oliver’s actions is that Brexit never happens at all, the cost to our political stability will be incalculable.