A United Nations delegation will visit the Great Barrier Reef later this month ahead of a critical decision about whether the reef’s World Heritage status should be downgraded due to damage caused by global warming.

The federal government in June last year criticised a move by the United Nations Educational, Scientific and Cultural Organisation (UNESCO) to list the reef as an “in danger” World Heritage site, after the organisation raised questions over Australia’s commitments to address climate change, which is the greatest threat to the coral ecosystem. 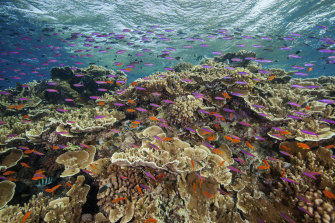 Environment Minister Sussan Ley said she was “extremely disappointed” that UNESCO had issued a draft declaration to downgrade the reef’s status without sending a delegation to visit the reef.

Ms Ley argued climate change required global action and the Great Barrier Reef had been singled out for downgrading when nearly all World Heritage sites were threatened by climate change, and Australia was playing its part to reduce emissions.

Ms Ley then lead a successful lobbying effort in June that delayed a vote on the reef’s World Heritage status. UNESCO subsequently asked Australia to report back on the reef’s health in February ahead of a final vote in the middle of this year.

UNESCO’s delegation will visit the reef on March 21, including representatives from member countries on UNESCO’s World Heritage Committee and scientists from the International Union for Conservation of Nature (IUCN).

The federal and Queensland governments have been increasing their reef conservation funding. A total of $4 billion has been committed to tackle agricultural run-off along the reef that reduces water quality, as well as crown of thorns starfish control and scientific research.

A spokesman for Ms Ley said the UNESCO mission is being planned in collaboration with the World Heritage Centre and the IUCN.

“The World Heritage Committee will be given every opportunity to satisfy its requirements,” he said.

Climate change is driving a dramatic increase in coral bleaching, which occurs when the sea surface temperature is too hot for too long. There have been five mass coral bleaching events since 1998 that affected more than 98 per cent of the Great Barrier Reef.

A searing late summer heatwave over the past week has sent the Great Barrier Reef into the red zone for risk of coral bleaching, with scientists warning that high sea surface temperatures could have already caused widespread death.

The government’s Great Barrier Reef special envoy, Warren Entsch, said it was crucial the delegation be taken to view areas where the reef has been damaged so the government could demonstrate the actions it was taking to protect it.

“It’s absolutely critical when they go to the reef that we don’t put lipstick on it,” Mr Entsch said. “We tell the truth and show the impact of bleaching and cyclonic activity and crown of thorns. And we also show them the significant improvements due to our management.”

Mr Entsch hosted a UNESCO mission in 2012 and he said he made sure delegates got to see the “good, the bad and the ugly”.

“We put their heads under the water and showed them areas of bleaching and how it’s recovering,” Mr Entsch said.