Dream holidays that ended in PRISON: Brits reveal how carefree nights out abroad turned to disaster – including a woman jailed in Dubai because a man put his hand on her shoulder and a Miami clubber framed for fraud

Three Brits have revealed how carefree nights out abroad took a dark turn when they ended up in prison as part of a new documentary series.

Recruitment consultant Rebecca Blake from Surrey ended up being jailed in Dubai for three months because she shared a taxi with a man who put his hand on her shoulder.

Londoner Daniel Bransbury flashy holiday to Miami ended in a disaster when he was falsely accused of fraud while exchanging currency, and ended up in jail for two months, where he was forced to defend himself from hardened criminals.

And Josh Lomas Mears from Lancashire wound up in a Thai jail after becoming embroiled in a street brawl with a group of British tourists.

Their stories are told as part of new four-part 5Star series Young, Dumb, and Banged Up in the Sun, which features young Britons imprisoned abroad while on holiday or living as expats.

And they prove how, terrifyingly, things can take a dark turn despite your best efforts to stay out of trouble. 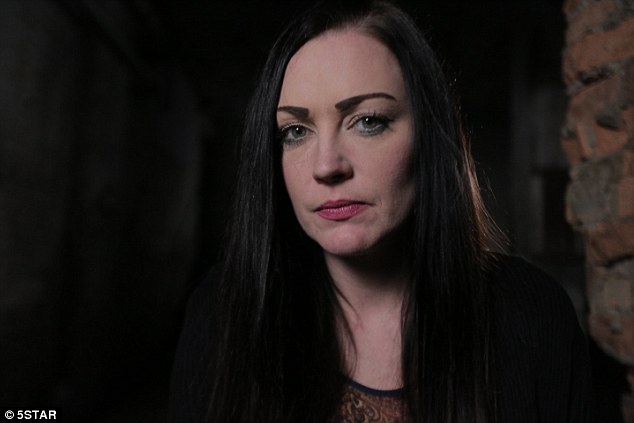 Recruitment consultant Rebecca Blake from Surrey ended up being jailed in Dubai for three months after being accused of having sex with a man in the back of a taxi. Even though it was proved that they didn’t have sex she still had to serve time for ‘indecency’

Reason: Having sex outside marriage, public act of indecency and drinking without a licence

Rebecca moved out to Dubai after visiting her sister who was living in the Emirate and being charmed by the glamorous lifestyle and friendly culture.

‘It’s only until what happened I saw a very dark side of Dubai.’

Rebecca’s life in Dubai unravelled the day she attended a boozy brunch party in May 2012 where she got chatting to an Irish man in her circle of friends and the pair hit it off.

Later they decided to leave together and climbed into a taxi together, her companion carrying an open bottle of beer.

I had no idea alcohol was illegal unless you had a licence,’ she recalled. ‘I  had no idea that was going to be the moment my life completely changed.

‘He had a bottle of beer on him. We got into a taxi and the driver started going completely the wrong way. We ended up having a bit of an argument. Next thing we know, he pulls over. There’s a police car on the side.’

After spending 40 minutes speaking to an officer, the driver took them to a police station where Rebecca was breathlysed and handcuffed, before being transferred to prison. 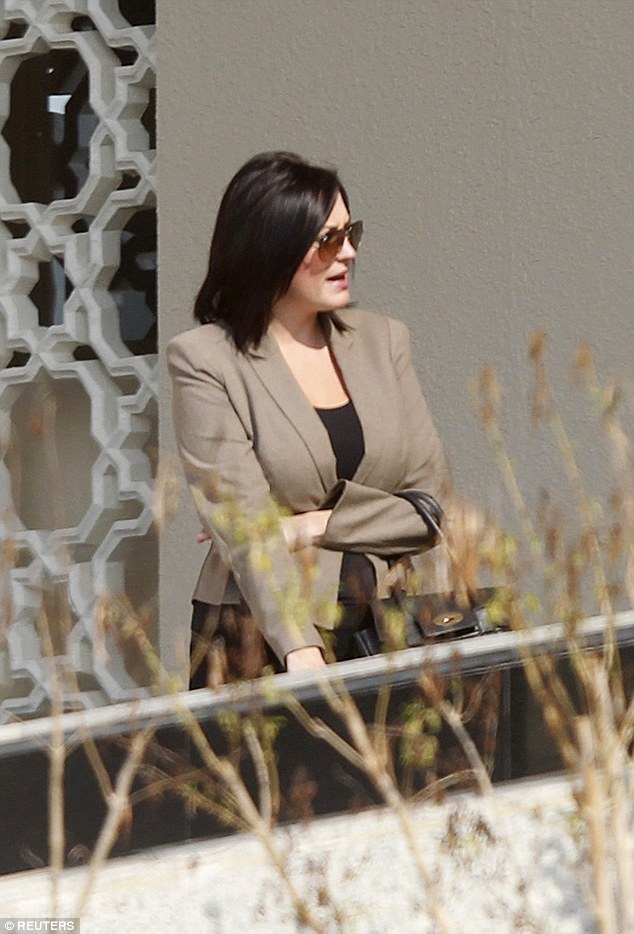 Rebecca Blake looks on outside the Dubai Court in November 2012 after being sentenced to three months in prison and deportation following a boozy brunch that saw her accused of having sex outside of marriage, indecency and drinking alcohol without a licence

‘My heart sank, I just knew something wasn’t right. It looked like a dungeon. It was all underground. The smell was revolting. It smelled of really strong urinal,’ she said.

‘Women were just lying on the concrete floor on old mattresses, falling apart.’

Next morning she was handcuffed again and put in shackles before being taken to a room where she was subjected to tests to establish if she’d recently had sex.

‘She was told: ‘You’ve been accused of having sex in the taxi. We’re going to be swabbing you to test for sperm, condom and DNA.

‘It was very intrusive. Very degrading. I felt dirty. It was a 45-minute to one hour examination.’

Five days later, Rebecca was released on bail but still had to go to court. Tests showed she hadn’t had sex, but news of her arrest had already hit the front pages back at home.

When her day in court came, she was charged with having sex outside of marriage, public indecency and drinking without a licence. Despite the report showing she’d not had sex, she was still found guilty.

‘Because I was in the papers they wanted to make an example,’ she explained.

She then waited for a few more months as her lawyer appealed. At her second court appearance, the sex charge was dropped but she was found guilty of indecency because her male companion’s hand had been on her shoulder.

Recalling her time in prison, the moment she walked in the other women started hissing at her and banging on the doors.

‘They hissed at me privileged English b****. I thought “Am I going to feel a knife?”.

‘They watched Downton Abbey and thought I was: “I’m from England, I’m wonderful and great”.

It took three months before Rebecca was released and she left Dubai immediately and has never returned since. Rebecca Blake outside the Dubai Courts in November 2012 with her lawyer. Despite being found not guilty of having sex in a taxi, she still had to spend three months in prison for ‘indecency’ because her male friend put his hand on her shoulder

Party boy Dan was looking forward to spending Memorial Weekend in Miami after saving £3,000 for a holiday of fast cars, beautiful women and all-night clubbing.

‘I was single, had cash to burn. Saved up £2 to £3K and took that with me. It came from the bank. Everything was fine.

He booked a table at an exclusive club called Mangoes and was enjoying lots of attention from admirers, when he decide to step out to change his last £1,000 so he could keep the drinks flowing.

‘Up until this point I’d been changing money in the bureau and went to change up the last,’ he said.

He handed over his money to the cashier, who disappeared and left him on his own. 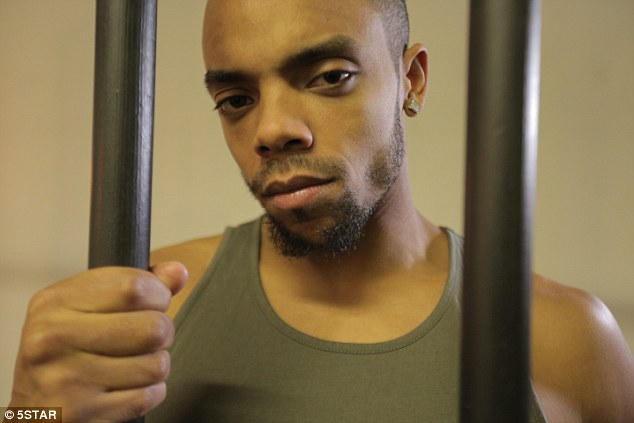 ‘To my amazement I took one little glance out the window and there’s police. I’m like, “something must have gone on across the road”. They enter the shop.

‘One of them’s gone “police, put your hands behind your back”.

‘The amount of history they’ve got pointing guns at people. If you don’t do what they say they shoot regardless. That’s when I decided, “I’m not going to get shot”.

‘I put my hands behind my back, turned around facing the wall. Then they put me in cuffs. Didn’t know what was going on.

They were quite aggressive. One thing was for certain, this woman fitted me up.

At the police station in Miami, Dan was told he was being charged with fraud.

‘Once minute, you’re shutting down clubs and spending money. You blink and you’re on the floor in a holding cell,’ he said.

Next day, he was transferred to the county jail and put in an orange jumpsuit.

‘I’ve watched movies, so you see what it’s all about. If you come in and you’re fresh you have to prove yourself. If you can’t they will pick on you all day long.’

While Dan found most most of his fellow inmates to be friendly, after a few days one wanted to fight him for his food.

Prisoners moved the bunk so they could fight, and he gave it his all and broke the other guy’s nose.

The guy’s come back and said “I respect you, London”,’ he recalled. ‘After that I didn’t get any trouble.’

Dan remained locked up for a month before being told the charges had been dropped and he was free to go.

He never received a full explanation or got his money back.

‘I was on the way home and thinking “this is just one big movie, I never want to be in again”,’ he said. Daniel knew he had to hold his own in prison and fought another inmate to win respect, after relying on what he’d seen in films to get by

Personal trainer Josh moved to Thailand to start a new life after discovering ‘heaven on earth’ during a trip with his brother.

‘I turned a two week holiday into a permanent thing. This is my home now. This is where I want to reside for the rest of my life,’ he said of how he felt about his first visit.

Eight months into his stay, Josh was loving life and spent most evenings partying after finishing his shift in a nightclub.

One night he was drinking at a bar with friends when a group of girls beckoned him over.

All of a sudden, one stood up and slapped him around the face and started screaming and he realised it was the girlfriend of one of his pals, who had never really liked him. In anger, he picked up a glass bottle and threw it on the ground before storming out of the bar.

Outside, four British guys who saw what had happened inside started taunting him and a fight broke out.

He punched one and ended up on the ground being kicked in the nose before he was rescued by four of the notorious Lady Boys.

However, they couldn’t save him from Thai prison where he ended up with the four guys he’d been fighting.

‘At the station they held us for two hours. I was expecting them to say you can go now, we’ll sort it out. ‘They opened another door and I see bars. There was a hole in the floor for a toilet. I laid on the floor and tried to close my eyes and make the time pass faster.’

The next day Josh was told to pay a fine, or face up to three years maximum in jail.

Paid a fine or stay a few months or three years maximum.

‘ I found out it was all over the TV and newspapers: Five Brits brawl on the street in Thailand.’

Josh decided to pay the fine and even struck up a rapport with one of the men he’d been fighting.

‘Me and this lad we had the fight with, we had a bond. We shook hands,’ he said.

‘It was an experience. Everyone’s done something they’re not proud of. I can’t really fault it. It’s still paradise to me.’

Young, Dumb and Banged Up in the Sun, Wednesdays at 9pm on 5STAR