Home » Lifestyle » E.L. James is back with The Mister: JAN MOIR’s inimitable verdict 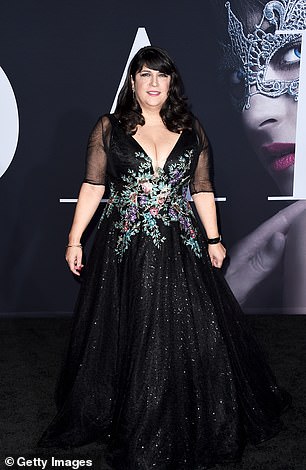 It is time to say goodbye to handsome sadomasochistic American billionaire Christian Grey and the demure but captivatingly beautiful student Anastasia Steele, his willing accomplice throughout five torrid books and three terrible films.

And it’s time to say hello to 50 Shades Of Brit, in the form of handsome, sex-mad millionaire The Honourable Maxim Trevelyan, aka Lord Trevelyan, the 13th Earl of Trevethick, a green-eyed hunk with dimples on his bottom and a winning way with women. (‘As you wish, I growl and thrust inside her’).

He owns a 30,000 acre Cornish estate and ‘a mop of unruly chestnut curls with gold highlights that glint beneath the magnificent chandelier in his hallway.’ Not a euphemism, ladies, the author really does mean his lovely apartment in London.

Maxim is the star of The Mister, E.L. James’s new novel that takes us from the Chelsea Embankment to Cornwall to Albania and even — gasp — to Brentford, as the good lord pursues his demure but captivatingly beautiful Albanian cleaning lady, Alessia Demachi. 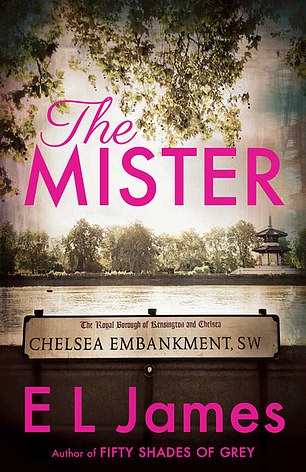 Along the way, James typically leaves no cliché unturned (‘I smelled a rat’) nor puckered nipple uncovered, although devoted fans of E.L. James’s previous oeuvre might be rather disappointed.

For while there is lots of sex in Mister, there are no gags, whips and only one single inventive use of a silken scarf.

In this attempt to write a straightforward romance, James’ spanking new protagonist is no spanker.

Nor is there a Red Room of Pain, unless you count trying to crunch through the utterly deathly prose which is the author’s trademark style, one which makes Dame Barbara Cartland seem like a literary genius. Let me give you a flavour of the horror.

The first time Max meets Alessia he ‘notices that her jeans are overwashed and her eyes are large and dark, like a startled doe’.

Meanwhile, she is so shocked by his handsomeness that ‘she clutches the handle of the broom to keep herself upright’.

‘I am cleaner, Mister,’ she says, while he thinks ‘for a woman dressed in a nylon housecoat, she is hot’. Throughout the 30-odd chapters, the story switches from her perspective to his.

As Alessia gets out her Windolene to clean the mirrors and drag Henry the Hoover around his penthouse, she admires Max’s ‘vivid green eyes, eyes the colour of the still, deep waters of the Drin on a summer’s day’.

Meanwhile, Maxim thinks she looks like ‘an angel, possibly the Virgin Mary or a nun in blue’.

Is there much more of this to go? Oh God, only the 500 pages. Yet like Dame Agatha Christie, E.L. James is smart enough to give her readers what they want. With Christie it was a murder on the first page, plus a cavalcade of fruity suspects.

With James, she returns once more to the perennial allure of a rich and powerful man falling for a beautiful but poor woman.

For underneath the bondage of Fifty Shades lurked a very conventional romantic narrative.

Anastasia was a strong and self-contained young woman, but one who still had inner doubts about herself and her attractiveness. She became a vehicle for the insecurities of millions of women who secretly harbour fantasies of being swept away from their humdrum lives by passion — and a wealthy lover.

In The Mister, the author goes one step further, creating a marvellously preposterous aristocratic hero within her Cinderella in Downton Abbey storyline.

YOUR QUICK ROMP THROUGH THE PLOT

Hi, I’m Maxim. My big brother died, did he commit suicide? Who knows, we never return to this theme again.

I inherit the title Lord Trevelyan, but I remain humble. ‘Blake,’ I tell my butler, ‘just call me sir.’

I like sex but there are rules. ‘Not in front of the staff,’ says mater. Hang on, who is that beauty polishing my piano? I can see her pink pants through her nasty nylon pinnie. What a babe. I write a song for her.

‘Mister, I clean?’ she says. In the kitchen, I notice she irons my shirts with sensuous grace and long easy strokes. Excuse me I must go and take a shower. (Hi, I am Alessia. What does he see in me? I am only his cleaner.)

Some bad guys try to kidnap her, I take her to Cornwall where she has never seen the sea. Her giggle is breathy, and it speaks directly to my groin. The shield from my family coat of arms perfectly mimics the Albanian flag — what are the chances?

She has nothing and I have everything. And if I take advantage of her, what would that make me? Never mind, I peel off her Spongebob Squarepants pyjama bottoms and an old Arsenal t-shirt someone gave her because she has no clothes of her own. She is a 24-year-old virgin, so I must be gentle. How can I explain this without sounding pervy? Slowly I let her adjust to my intrusion. Will that do?

(Hi Alessia here. How could I be so wanton? But Mister Maxim has woken a monster within me.)

We make love a lot and gorge on ghastly meals. Bad men come. I beat them up.

We make love. Again. Back in London Alessia and I declare our love but she gets kidnapped by a man her father promised her hand to in marriage. Ye gods. I fly to her parents’ house in Kukes, Albania, for a showdown. Hope nobody makes me eat that lamby rice thing again.

Betrothed guy tries to shoot me, but love conquers all. Alessia says she is pregnant, but she is not really. We have sex together again.

I wouldn’t mind some kids, I tell her. She teases my lips with her tongue. Put down that duster, love, I tell her. You’ve pulled. I’m the only Mr Muscle you’ll be spraying from now on. The end.

Max may be a millionaire, but he doesn’t have a sexual kink like Christian Grey. Bizarrely, we discover early on that his favourite biscuit is a plain chocolate digestive. He plays piano and guitar, composes scraps of music that express the void within his soul. He’s also a DJ and a photographer who is also in demand as a hot model. Of course he is.

Slender but curvaceous Alessia quickly becomes obsessed with his eyes, variously described as looking like the River Drin (see above), with ‘irises a darker green around the edge like a fir, while towards the dilating pupil they are warmer, like a fern in spring’.

They are also like a forest in spring and malachite, gottit?

The Mister seethes with hints that the much mocked authoress wants to be taken seriously, as she plays with underlying themes of economic inequality and the plight of undocumented workers trafficked in from eastern Europe.

Fair enough, but the tone is terrible. When Alessia wakes screaming in the night because of sex-trafficked memories, Max tells her: ‘The next time you scream, I’ll be right there.’ He then thinks to himself: ‘Of course, I’d like to make her scream in a different way.’

The worst bit? To make up for the lack of kink, E.L. James seems to have decided to use food as a handy conduit for arousal and I really wish she hadn’t. By the time we get to chapter 15 Maxim and Alessia are having feasts before they tumble into bed together. First of all it is fish pie and beer in the pub, the following evening it is a pre-sex meal of beef and prune stew before some foreplay with the pudding afterwards.

Let me say one thing, I’ll never eat banoffee pie again. Then it’s pulled pork with a pomegranate jus and worst of all, an Albanian dish of rice and lamb with a baked yoghurt crust, ugh.

Purists and snobs — like me! — may mock James’ writing style, but one can only admire her success.

In scenes filmed in full screen buttockorama, Dakota Johnson starred as Anastasia, while Jamie Dornan did his best as Christian Grey. Their lack of on-screen chemistry didn’t help, but fans didn’t seem to care, and flocked to the films anyway.

What began as an exercise in escapism on her long, dreary Underground commute into London nine years ago has transformed James, 56, into one of the richest and most influential authors in the world.

She’s now said to be worth £114 million — a fortune generated not just by the books and films but the Fifty Shades merchandise, ranging from lingerie and jewellery to whips and bottles of wine, which the author herself personally helped to design.

Not bad for a housewife, whose Northern Irish screenwriter husband Niall Leonard proofreads all her books and says he couldn’t be further removed from his wife’s fantasy creation. The couple have two grown-up sons, now 22 and 24, whom James also insists aren’t remotely embarrassed by their mother’s torrid imagination.

Cars have also been an indulgence — James was the first person in the UK to buy a £60,000 red Tesla Model S electric sports car and also drives a blue ‘Chelsea tractor’ complete with a number plate ending ‘SXY’.

But, despite the baubles of success, James remains down to earth, equally at home with her new life in LA as she is her old life in West London.

She continues to frequent her favourite pub in Ealing, where she goes to play Scrabble or simply for Sunday lunch with her family.

And while she has become a fan of regular manicures and pedicures, she still has her hair blow-dried in Acton, does her own supermarket shopping and walks her two Westies, Max and Mini.

She has also made vast donations to charity — according to her company records, in the region of £1.2 million to date.

Has she given up on Christian Grey for ever? Note that Trevelyan was Christian’s middle name. So perhaps not.