On Wednesday, TV and radio presenter Eddie McGuire announced his departure from Hot Breakfast, the Triple M breakfast show he's hosted for 11 years. His colleague Luke Darcy, a former AFL player, is also leaving, with the show to wrap up at the end of this month.

McGuire is one of Australia's most recognisable media personalities, having juggled various TV and radio commitments for years alongside his job as the president of the Collingwood Football Club. He's also managed to drum up more than his fair share of controversy. 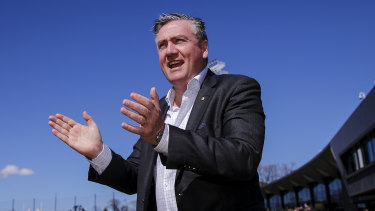 As McGuire himself puts it, he's a workaholic – and exhaustion has led to some "absolute mishaps" over the years.

"The only time when there's been a mistake is when I'm overly tired," McGuire said on Wednesday. "The Adam Goodes thing is the clear example. I was crook that week and the night before I was out late raising money for Indigenous scholarships [but] I felt I needed to stay on air.

"If you're going to be broadcasting as often as I am – on my shortest day of work I'm talking on-air for four hours – you can sometimes make a slip-up."

Below, some highs and lows from McGuire's 11-year stint on breakfast radio.

The 'land of the falafel'

McGuire made national headlines in 2011 after labelling Sydney’s western suburbs the “land of the falafel” during a discussion with Greater Western Sydney Giants coach Kevin Sheedy.

The radio host was subsequently accused of lazy stereotyping, with politicians entering the fray. Then-Labor premier Kristina Keneally defended western Sydney, calling it the "powerhouse" of NSW's economy and McGuire later apologised, telling radio station 2GB the label was meant as a term of endearment.

"If this is now seen to be abusive … then I apologise to every person in the western suburbs," he said.

In 2013, McGuire suggested on air that Indigenous AFL star Adam Goodes be used to promote the Melbourne stage adaptation of King Kong. McGuire apologised to Goodes and stared down calls to resign as Collingwood president.

"I have contacted the Sydney Swans to explain the situation to Adam Goodes personally," McGuire said at the time. "Adam was gracious enough to take my call and expressed his disappointment."

When it launched in 2009, McGuire intended for Hot Breakfast to sit somewhere between "traditional FM" and talkback.

"As much as I love listening to 3AW it seemed a bit old to me [at the time]," he said. "And the FMs sounded a bit young in their approach. I just wanted it to be a lean-forward show. Something that makes an impact… makes them laugh and cry."

Hot Breakfast's blend of sport, comedy, rock music, news and opinion helped Triple M help secure a win at the 2014 Worldwide Radio Summit Awards in Hollywood, for most innovative radio station of the year. The show has also been recognised by Australia's annual Commercial Radio Awards.

In 2016 McGuire said he would pay $50,000 to see award-winning journalist Caroline Wilson stay under a pool of iced water while others "stand around the outside and bomb her". The comments were made while Triple M was covering a live charity event. At the time, AFL boss Gillon McLachlan said the comments were “clearly not appropriate”.

"Although seeking to be lighthearted, the language and tenor of the wording could be seen to be supporting violent attitudes or actions against women," he said.

McGuire apologised for the comments.

Hot Breakfast has broken some big stories over the years – from AFL news to AC/DC's reunion. The show's September interview with Victorian Premier Daniel Andrews is also the most downloaded piece of audio in Triple M's history. McGuire said he is particularly proud of the show's ability to generate headlines.

"We were the only place the Premier would come into to speak for a time," he said. "Stories like that are really important to Melbourne."

Turning over a new leaf

Last year, McGuire took to the airwaves to describe the moment he sat down to watch the Adam Goodes documentary The Final Quarter. The documentary featured the radio host's infamous comments about Goodes and King Kong.

McGuire told listeners the film was both "confronting" and "heartbreaking".

"I encourage people to watch this documentary," he said. 'What you have to do in these situations is you have to front up to things. It's an eye-opener. And if that's the bottom line, it's been a worthwhile exercise."