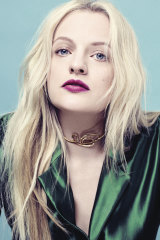 Elisabeth Moss: “I learnt my lesson the hard way that if you say something really personal, it’s there on the internet forever.”Credit:Tony Kim/Trunk Archive/Snapper Images

Long before Elisabeth Moss, the star of the upcoming horror-thriller The Invisible Man became one of the most revered actors working in television, she was already part of what would become TV’s golden age.

At the age of 10, she began working with prolific TV creator David E. Kelley (L.A. Law, Ally McBeal) in Picket Fences, and at 17 she joined the cast of one of the great political TV dramas of our time, The West Wing.

As Zoey Bartlet, youngest daughter of President Bartlet (Martin Sheen), she had a recurring role through the show’s seven seasons and was able to play in the margins of Hollywood long before anyone was looking.

“It was a really spectacular experience and I still can’t believe I got to have one of my first really big jobs with [producer, playwright and Oscar-winning writer] Aaron Sorkin and that cast,” says Elisabeth.

“I was also young enough to be able to really learn from these incredible actors like Martin Sheen, Allison Janney and Brad Whitford. They taught me not only about acting but how you’re supposed to act as a professional and how to be kind to everyone on a set. It’s behaviour I’ve carried forward through all the TV I’ve done since.”

We’re sitting in a sparsely decorated room at the back of Quixote Studios in West Hollywood, where the 37-year-old has spent the day being primped, prodded and photographed for The Invisible Man, directed by Australian Leigh Whannell.

She’s scrubbed off the make-up and changed into a pair of sweatpants and T-shirt under a leather moto jacket to avoid the frigid airconditioning. Curled up on a grey couch, she is nursing a bottle filled with green liquid into which she’s added some vitamins in an attempt to ward off a cold. “I’m trying to keep up my energy,” she says apologetically.

However, she needs no artificial boost when she talks about The Invisible Man. Her piercing blue eyes light up recalling the moment she first heard about the role. It was during a freezing night shoot on set of The Handmaid’s Tale in Washington DC.

“My agents called and told me I was offered my first lead role in a studio film, and I was blown away,” she says. “But I was also mystified, because when you hear ‘The Invisible Man’, you think of the classic telling of that story, with a man in bandages, a hat and glasses. I couldn’t imagine how I’d fit into that. But then they sent the script over and it immediately made sense.”

The film is a modern retelling of H.G. Wells’s sci-fi novel, which also inspired the 1933 movie of the same name. In the remake, Elisabeth plays Cecilia Kass, a woman trapped in an abusive relationship with wealthy and brilliant scientist Adrian Griffin (Oliver Jackson-Cohen).

She finally escapes him and goes into hiding, but when he commits suicide, leaving her a fortune, Cecilia suspects a hoax. As she becomes convinced she’s being hunted by someone nobody can see, she realises she’s alone in her fight to save her life – and her sanity.

“I’ve always loved scary movies,” Elisabeth says. “When I was 11 or 12, I’d get together with friends at sleepovers and we’d scare the shit out of ourselves watching them and screaming and laughing! So, my threshold is really high and I just don’t scare easily!”

A look at her impressive list of credits confirms the extent of her fearlessness, starting with her career-changing role as secretary turned advertising-copywriter Peggy Olson in the 2007-15 TV drama Mad Men. Since then, she’s amassed dozens of film credits including Get Him to the Greek (2010), High-Rise (2015) and Us (2019) as well as her Golden Globe-winning role as a police detective confronting her dark past in Jane Campion’s 2013 series Top of the Lake, shot in Sydney and New Zealand.

The Los Angeles-born actor earned six Emmy nominations and a Golden Globe nomination for her Mad Men role, then took home a Golden Globe and an Emmy two years later for her portrayal of rebellious handmaid June Osborne in the dystopian television drama The Handmaid’s Tale, now filming its fourth season. 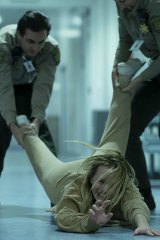 Elisabeth Moss in The Invisible Man.

Her provocative roles have often contributed to the conversation about women’s rights, and she was particularly attracted to Leigh Whannell’s modern take on The Invisible Man.

“He’s retold it as an analogy for gaslighting, which is so smart,” she elaborates. “There’s a woman coming out of an abusive relationship but it’s called The Invisible Man, so we have all the stuff that goes with the horror and entertainment – from special effects and car chases to scary jumps and blood. Then there’s also this other path through the film that’s this really emotional and character-driven story.”

Much as her signature Handmaid’s Tale costume of red cape and white hat has become synonymous with women’s rights, Elisabeth is hoping audiences will respond to those undercurrents.

“When I tell people what the film is about, you see the penny drop in their mind,” she says. “I feel like most people have had some experience with gaslighting, or feeling like you’re being taken advantage of, or feeling like there’s something that you believe that people think is crazy! So those themes are really relatable to people.”

Produced by horror master Jason Blum (Insidious, The Purge, Us), The Invisible Man also brought her back to Sydney three years after she’d filmed Top of the Lake: China Girl there.

“It’s really bizarre how at home I feel in Sydney,” Elisabeth enthuses. “I was working almost every day  or 2½ months and stayed in the CBD for a while. But then I moved to Bondi Beach, which I’d never done before, and it was so beautiful to wake up with a view of the water every day.”

Born to musician parents and raised in Laurel Canyon, Elisabeth started acting at the age of eight with a small role in the 1990 miniseries Lucky Chances (for trivia buffs, she played Sandra Bullock’s character’s daughter in the Jackie Collins adaptation and had to find her mother dead in a swimming pool). She also started ballet lessons at the age of five and had dreams of becoming a professional ballet dancer, attending the School of American Ballet in New York.

“I’m very happy with the way my life turned out and glad I didn’t go down that path, because it’s a very difficult life,” she says of her decision to quit dance and focus on acting after working on The West Wing.

In previous interviews, Elisabeth has been guarded and almost cagey when asked about her 10-month marriage to actor Fred Armisen or her three-year relationship with Australian cinematographer Adam Arkapaw. She’s also clearly uncomfortable when asked to explain how she reconciles her Scientology beliefs with the controversial church’s criticism of homosexuality.

“I am obviously a feminist and a huge supporter of the LGBTQI+ community and believe so strongly in people being able to do what they want to do, to love who they want to love, to be the person that they want to be – whoever that is,” she told The Daily Beast last year in response to that question.

Slipping off her sneakers and taking another sip from her water bottle, Elisabeth seems unruffled today when reminded that her on-screen roles open the door for justifiable questions about politics and religion. She understands the curiosity yet remains unapologetic about the way in which years of being interviewed have taught her to keep her cards close to her chest.

“I think I learnt my lesson the hard way that if you say something really personal, it’s there on the internet forever and for anyone to look at,” she declares. “I finally understood that when you’re in
control of that, it’s in your control. But when I was younger and talking to journalists, I had no idea this was something I’d have to think about!”

When she’s not working, Elisabeth lives in New York and prefers weekly dinners with her mother and nights in, watching TV on her iPad to hitting the red carpet.

“I don’t mind putting pretty clothes on because I’m a girl and I do like that, but what’s interesting to me is acting,” she says. “I think that all the actors I admired from a young age were always people who were transforming themselves and focusing on the character and the work.

“When I hit my 30s,” she adds, “it became even more important to me to have longevity and be able to keep doing what I’m doing for as long as they’ll have me, just like Judi Dench, Meryl Streep, Helen Mirren and all my favourite actresses.”

Rest assured, it’s unlikely the queen has peaked just yet.

The Invisible Man opens in cinemas on February 27.

This article appears in Sunday Life magazine within the Sun-Herald and the Sunday Age on sale February 16.