More than a month after Armie Hammer and Elizabeth Chambers announced their split, the TV personality took to Instagram with a sweet message for her ex. 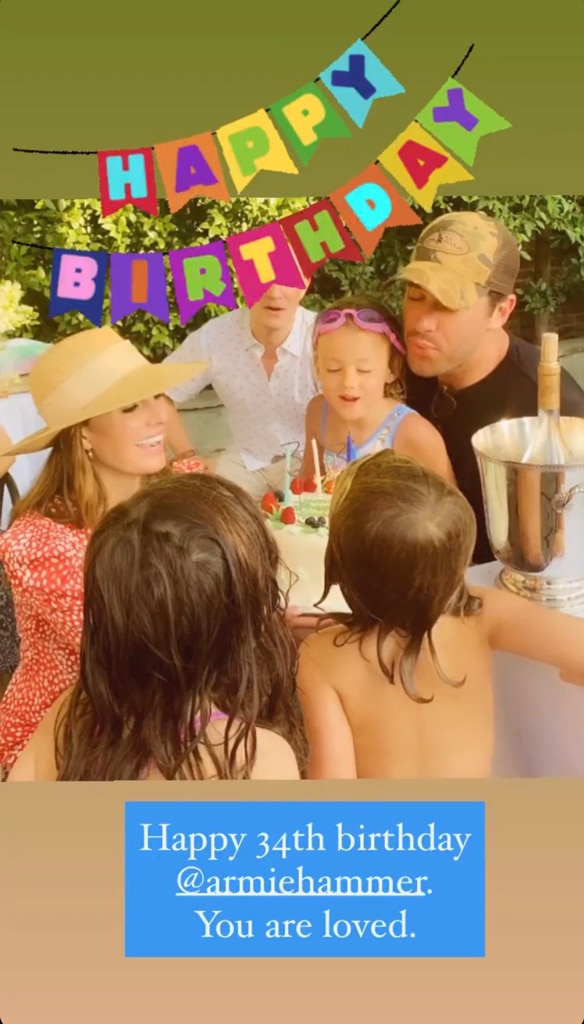 The television personality took to Instagram on Friday, Aug. 28 with a short yet sweet tribute to the actor. "Happy 34th birthday," Elizabeth captioned a family photo from a past celebration. "You are loved."

Just over a month ago on July 10, Armie and Elizabeth announced their decision to divorce after more than a decade together.

"Thirteen years as best friends, soulmates, partners and then parents," the former couple said in a joint statement. "It has been an incredible journey, but together, we've decided to turn the page and move on from our marriage. As we enter into this next chapter, our children and relationship as co-parents and dear friends will remain our priority."

The Call Me By Your Name star asked for "privacy, compassion and love" as they began to co-parent their three kids, 5-year-old daughter Harper and 3-year-old son Ford.

A source affirmed Armie and Elizabeth's commitment to their family, explaining to E! News, "Their public declaration of love and respect for each other really is true. There are still fond feelings between the two of them, and they're communicating happily with each other."

Prior to the split news, the stars spent time in the Cayman Islands. According to Elizabeth's Instagram, she and their kids are still self-quarantining in the tropical location.

Drew Barrymore Says She Regrets Drinking Too Much On WWHL

As for Armie, he shared with fans that he's spent the past few months in Joshua Tree, Calif. with a close friend.

"This one of my best friends, Ashton," he wrote on Instagram. "For the last 2 months or so I have lived with Ashton, worked construction with Ashton, and hiked with Ashton every day. He has been such a good friend (and boss) and has been the most supportive friend anyone could ever ask for. Today might be my birthday, but I just wanna say thank you to @ashtonramsey and say I love you dude."