It’s been hailed as the new Sex and the City, but Netflix’s glamorous new show Emily In Paris has come under fire from critics for its outdated and stereotypical portrayal of French people.

The series follows Emily, played by Lily Collins, who has moved from Chicago to take on a new job with a marketing firm in the French capital, where she’s met with a frosty response from Parisians who show no patience for the bubbly American.

Playing on outdated stereotypes about the French, the characters are portrayed as uncivil and unfriendly, and at times aggressive towards the foreigner, who doesn’t speak a word of the language.

Most of the women show no interest in the #metoo movement or feminism, while many the men’s flirtatious ways border on sexual harassment.

Many took to Twitter to complain that Emily in Paris was portraying all French people as rude, unfaithful types who take pride in being unpleasant and inappropriate, including one man who whispers in her ear: ‘I like American p****.’ 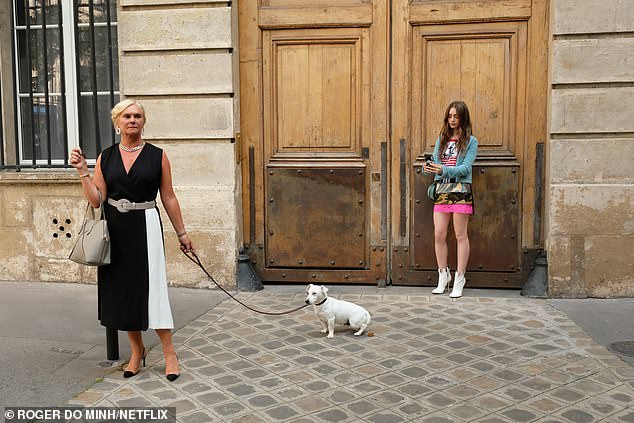 In the show, each French person Emily meets is portrayed as rude, including this woman who is letting her dog relieve himself in the street without picking anything up 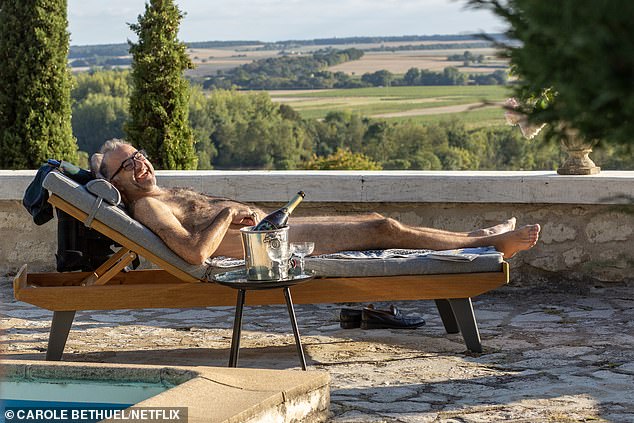 Arnaud Viard plays Paul Brossaud, the founder of the marketing firm Savoir. His sale of the the company to an American partner leads to Emily’s arrival in Paris 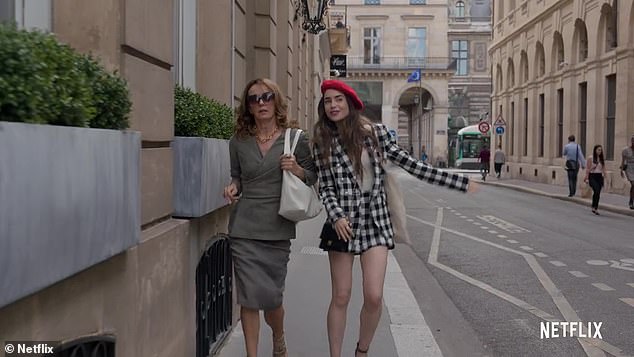 Viewers felt the show was listing stereotypes about French people, but were very enthusiastic about hot French chef Gabriel

Upon arriving in Paris, Emily who only knows rudimentary French, is confronted with several callous characters.

The first two people she meets in the French capital are an unfriendly concierge and a libidinous estate agent who piles on the pressure when Emily refuses his offer to go for drinks.

The American’s new boss Sylvie Grateau, played by Phillippine Leroy-Beaulieu, immediately seems to dislike her and plots to send her back on the first plane to Chicago.

Emily’s coworkers are no better, calling her ‘la plouc,’ – meaning ‘the hick’ – and refusing to invite her for lunch. 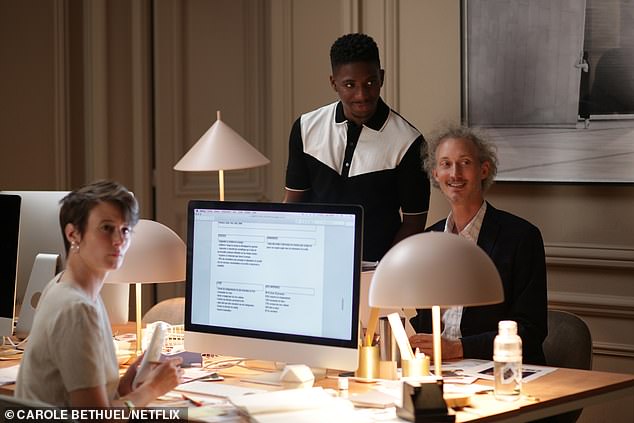 Emily’s French coworkers are unfriendly and judgmental and called her ‘la plouc,’ which means ‘The Hick’ 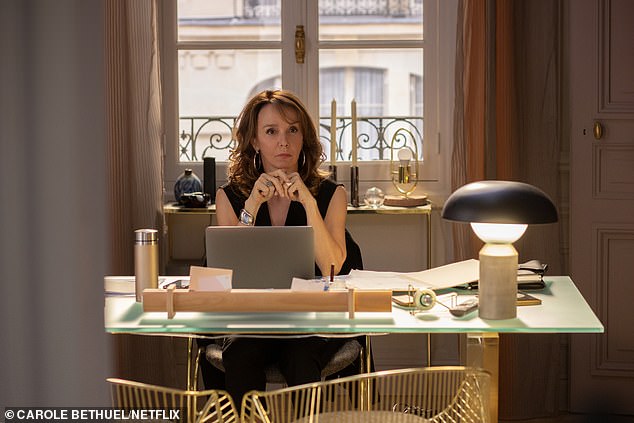 Sylvie, who is Emily’s boss, immediately takes a dislike of her for no reason and dreams of sending her back to Chicago

Throughout the show, each French person Emily encounters treats her poorly, from a snob date who judges her for liking Swan Lake to a florist who refuses to sell her the flowers’ she’s requested.

In one episode, a dog walker, dressed to the nines, is seen smoking while her bulldog – French, of course – goes to the toilet on the street, before she struts off without cleaning up.

The stereotypes dig deeper too, with all French people seeming uneducated about sexual harassment and the #MeToo movement, and affairs being portrayed as typical occurrences.

Emily’s boss Sylvie is the mistress of one of the firm’s clients Antoine, who sends luxury lingerie to Emily to ‘thank her’ for a campaign she’s imagined for his perfumery business. 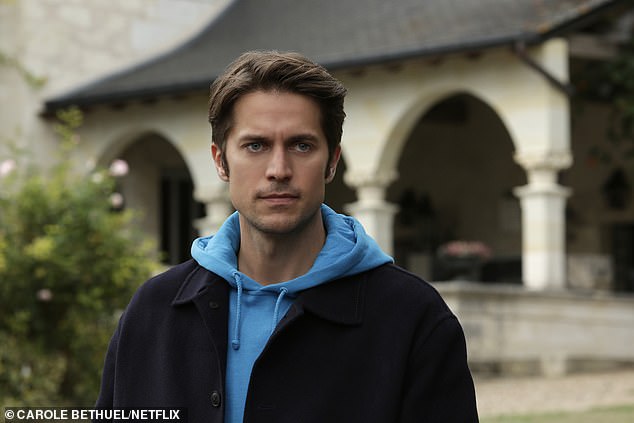 Gabriel is one of the only friendly French people Emily encounters on the show, along with Camille, a Parisian blonde who helps her buy flowers 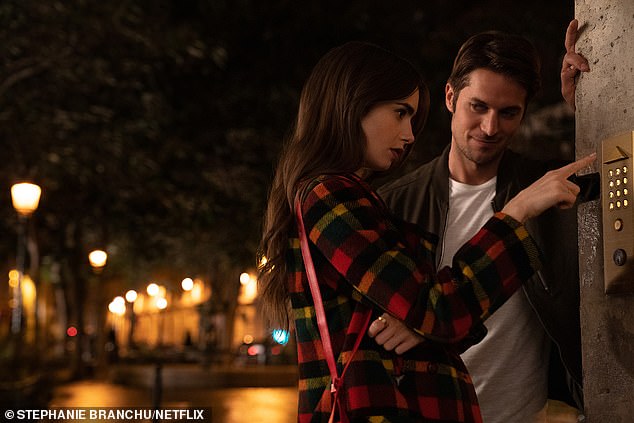 Audiences fawned over smoldering Gabriel, who entertains a flirtatious friendship with the American girl 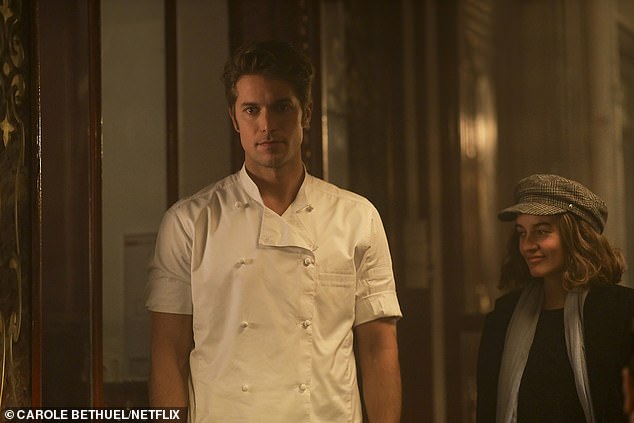 Dishy French chef Gabriel, played by Lucas Bravo, made Twitter swoon with his good looks, and is one of the few characters in the show who is kind to Emily

‘In Paris, the customer is always right,’ tells her Mindy, her first friend in Paris, who is Chinese but speaks fluent English.

The only two friendly French characters are Gabriel, Emily’s attractive and flirtatious downstairs neighbours played by Lucas Bravo and Camille, a beautiful blonde she meets close to her Parisian pad.

Viewers were quick to pick on the fact the show was presenting a very exaggerated and outdated portrayal of the French.

‘First 15 minutes of#EmilyInParis and I hate the way we French people are portrayed. WE ARE NOT ALL MEAN AND RUDE,’ one viewer said.

‘So French are sexist, rude and superficial but at least they have hot guys, great food and outstanding fashion,’ another sarcastically wrote.

‘Okay i’m used to trash Parisians BUT THEYRE EXAGGERATING IT SO MUCH!!!!! they’re not THAT rude come on,’ another said.

‘Hmm how condescending is Emily? Why is she wearing a bloody beret? Why are they showing French people as rude and arrogant? Stereotypes galore. I can’t take this show seriously,’ said one.

However, the blow was softened with the popularity of the show’s Frenchie male lead Gabriel, played by Lucas Bravo, who swept viewers off their feet with his good looks.

Nobody complained Gabriel, however, who meets Emily after she confuses the door of his apartment for hers.

Many viewers were taken with the attractive French actor, 32, who is poised to appear in a new adaptation of Mrs Harris Goes to Paris.

‘I need a Gabriel in my life,’ one said.

‘Bro! this Gabriel guy from #emilyinparis has my heart now,’ said another.

‘Guys let’s be honest, we all fell in love with Lucas Bravo,’ one said.

‘oh Gabriel! my ovaries are exploding,’ one wrote.

‘Can i order a Gabriel from Normandy, please,’ said another. 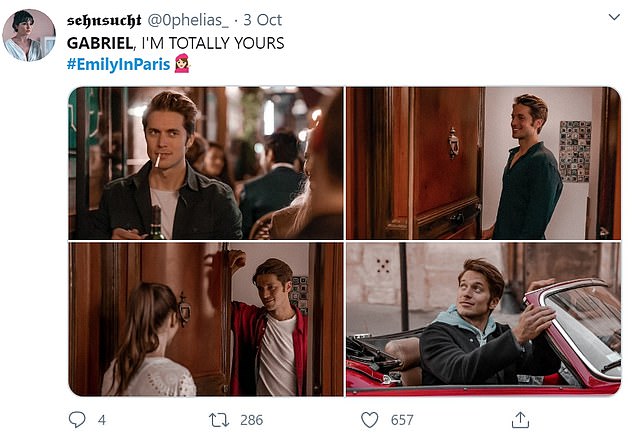 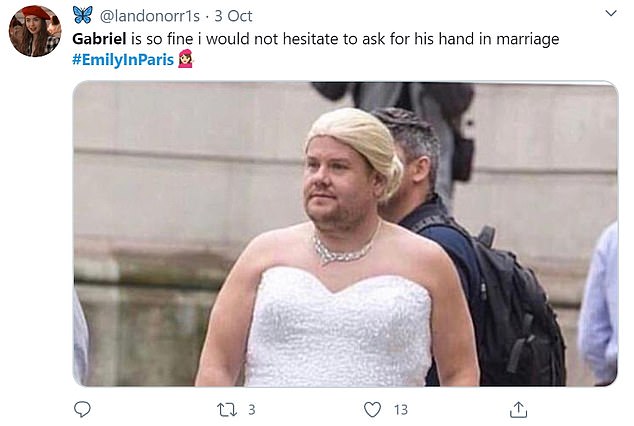 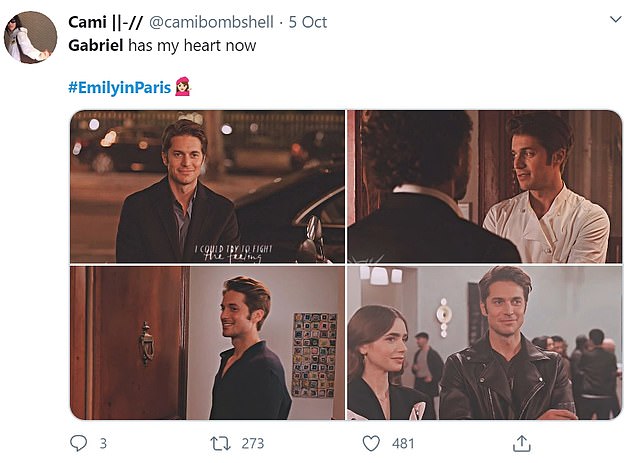 Fans’ ovaries ‘exploded’ thanks to Lucas Bravo’s magnetism as Gabriel in the show, with many saying they had fell in love with him