Home » Lifestyle » Enjoy your sculptures by the sea? Wait until you see them in the Snowies 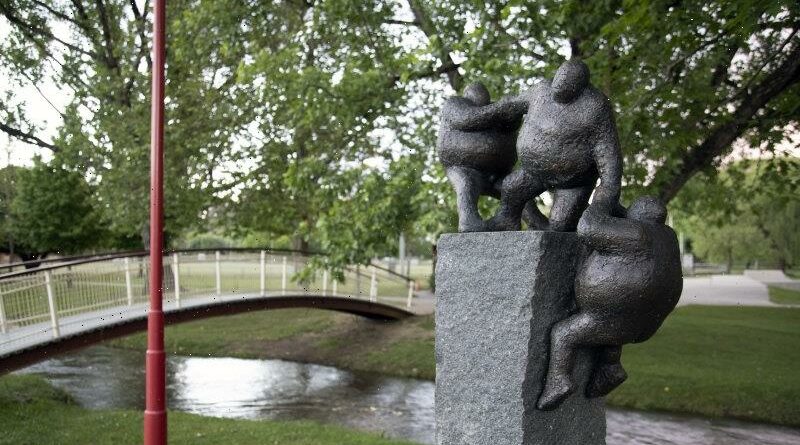 It’s said there are distinct personality differences between those who prefer the mountains or the seashore. While it would be hard to argue that all beach lovers are extroverts while mountain people are introverts, it’s probably true that most of us harbour an innate preference for one or the other. For Sculpture by the Sea, the public attractions of the coastline near Bondi or Cottesloe have drawn massive crowds since the start in 1997. Now David Handley and his crew have turned their attention inland, to the Snowy Valleys, in the northwest of Kosciuszko National Park.

This region, between the Snowies and the western slopes, is one of Australia’s renowned beauty spots, meaning that tourism plays a large part in the local economy. This is the thrust behind the new Snowy Valleys Sculpture Trail, which has been a couple of years in the making and is viewed as a key component of the area’s recovery from the bushfires of 2019. 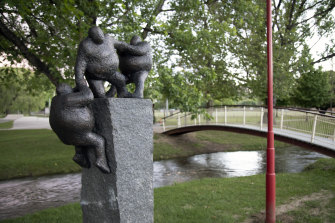 The scheme will be implemented in three phases, the second stage will come along later this year, and the third in April 2023. Works are being installed in the towns of Adelong, Batlow, Tumbarumba and Tooma, with further pieces to be found at three local wineries: Courabaya, Johansen and Obsession. In this first stage, 26 sculptures have been assigned permanent locations.

I flew to Wagga Wagga and drove around the trail last week, covering some 300 kilometres, not quite seeing everything. The experience was reminiscent of the Echigo-Tsumari Art Triennial, set in the mountains between Tokyo and Niigata, which is spread out over 765 square kilometres. The motivation behind the triennial was to use art to reinvigorate an area dying because of depopulation – a peculiarly Japanese problem. The event has turned this mountainous region into a major international drawcard.

Echigo-Tsumari is buried under two metres of snow in winter, and unbearably hot and humid in summer. By comparison, the Snowy Valleys are temperate and attractive. Even the stated aim of bushfire recovery seems to have been largely accomplished, at least to this tourist’s eye. There are plenty of blackened tree trunks that bear witness to the severity of the fires, and a chill in the air that signals the proximity of snow country, but these are small matters alongside the fresh air and magnificent, undulating landscapes. 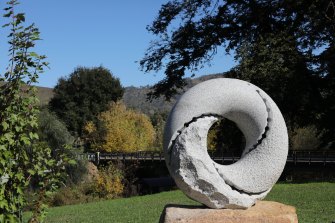 My first stop was Adelong, where a series of sculptures have been installed alongside a creek a few minutes from the centre of town. For those who want a longer walk, the trail connects to an existing attraction, incorporating Adelong Falls and the ruins of an old gold mill.

Eleven sculptors are represented, four of them Japanese. Usamu and Masako Ohnishi have made a shelter in the shape of a rabbit’s head. Takeshi Tanabe has contributed a carving in black granite that creates a visual echo of a nearby (at present) fast-moving creek, and Akiho Tata has placed two large pink intricately carved stone eggplants between the creek and the path. Shaumyika Sharma, from the US, has created a long wavy bench in coloured concrete while Slovakian sculptor Lubomir Mikle has made a corten steel work that resembles a ring of schematic car bodies. The Australian artists are Ron Gomboc and Tanya Spencer from Western Australia and Michael Le Grand and Harrie Fasher from NSW. Placed between these works are a series of witty signs by New Zealander Giuliana de Felice. One sign gives us a choice between The Future and The Past. Others point the way to Answers or Destiny.

The chosen pieces are not mere leftovers from Sculpture by the Sea events. The most striking is probably Harrie Fasher’s The Last Charge, a work that was unlucky not to have collected the major award when it was first shown at Bondi in 2017. This large semi-abstract group of horses, inspired by the Charge of the Light Horse at Beersheba in 1917, is a dead-set museum piece. Adelong should feel proud to be its new home.

Driving on to Batlow, one passes a park that displays a bright green wooden pole by Czech artist Milan Kuzica representing the stem of a plant, shooting upwards. It’s an appropriate theme for a region still recovering from the bushfires. In the main street, there’s one of Richard Tipping’s word pieces, pronouncing the ambiguous message “End Artwork”, along with a bronze sculpture by Keld Moseholm – a perennial SXS favourite, and a granite piece by Japanese sculptor Koichi Ogino. 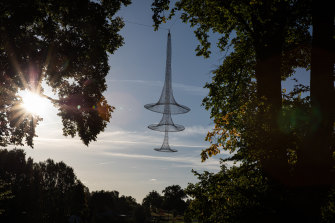 The highlight may be The Inconvenience Store, a temporary installation by Marina DeBris that features a huge stash of “marine debris”, scavenged from the seashore and repackaged. Nothing is actually for sale, although these pairs of broken sunglasses, old lures and fish-hooks, cigarette butts and other bric-a-brac could not be more enticingly presented. In the window of the shop next door one may glimpse metal abstract sculptures by artists such as Ron Robertson-Swann and Ayako Saito, awaiting a more sympathetic presentation.

Next stop, Tumbarumba, where there are six pieces, including works by Stephen King, Jennifer Cochrane, Takahiro Hirata and Keld Moseholm. The two stand-outs, placed amid a park that dominates the town, are Philip Spelman’s Lumina Folds and Marcus Tatton’s Habitat. The first is a large metal piece, painted blue, which makes for a powerful contrast with the lush green of the park. The latter is a chimney and fireplace constructed from chunks of firewood, stacked like bricks. It’s a conceptual joke, constructing a fireplace from the very stuff one burns in it.

Spelman’s work makes one think of the sharply defined forms of the landscape, while Tatton pays an oblique homage to the old colonial homestead. Both have a pronounced poetic aspect but little else in common.

The trail concludes with a single, imposing stone sculpture by Keizo Ushio, in the small town of Tooma, and several works on the grounds of Courabyra Wines, including an oversized metal whisk by Gavin Younge, which dangles from a tree as if it were a piece of exotic fruit, and a bright red modular steel sculpture by Harayuki Uchida, standing like a sentinel in front of the grape vines.

The Snowy Valleys project demonstrates that sculptures can look just as impressive set against a backdrop of hills, fields, trees and mountains as they do when spread across Sydney’s foreshores. There is a simple dichotomy between works of art that compete with nature and those that act as a complement. We tend to respond with instinctive delight or disapproval, our reactions often being determined by the subtlety and intelligence of the installation.

When we pause in front of some exotic intrusion in the landscape, we become more acutely aware of that landscape itself. For city people, these pleasures tend to be fleeting, but one would have to be remarkably hard-hearted to spend a day or two following this trail through the Snowy Valleys and not feel one’s spirits lifting.

Snowy Valleys Sculpture Trail is a permanent installation that runs from Adelong to Tooma.

To read more from Spectrum, visit our page here.