Erica Bana has good Zoom game. The lighting is perfect – you know, not too washed out, not so harsh that I can see every pore on his face – and he’s wearing a pair of fancy headphones, with an even fancier microphone jutting out from the side.

He’s sitting straight-backed on what looks like a reasonably plush sofa in Melbourne, with a window behind him and the curtains parted just so. He’s also – yep, I’m going to say it – ridiculously handsome. 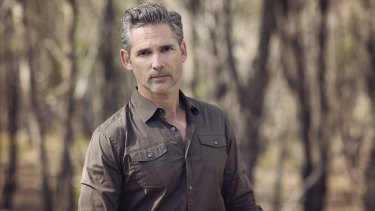 Eric Bana plays a detetive investigating a murder at a private girls school in the new audio drama The Orchard.

Meanwhile, I forgot to wash my hair and my background consists of a cracked wall with peeling paint that was due to be fixed days before the lockdown. It now haunts every video interview I do because it’s the only spot in the house with stable Wi-Fi.

Bana is here to talk about his new audio drama The Orchard, a 13-part murder mystery in which he plays a detective investigating the death of a teenage boy at an exclusive girls school. Instead, I’ve dragged him off topic and discovered the one thing he’d like to do but can’t.

“I can’t sing,” he says. “So if there’s this most amazing script ever, and it was like a two-hour film with this most incredible character, but there was 10 seconds of singing, it’s like it’s gone. It’s past, I have to let that thing go, you know. There are some things that I can’t pretend I can do.”

What about lessons? He can’t be that much of a lost cause, surely.

“Off to Hugh it goes,” he says, laughing. That’s Hugh Jackman, by the way, who is a good friend.

“When I look at someone like Bradley Cooper doing A Star is Born,” Bana continues, “I’m like, ‘Look at you, you lucky bugger.’ Listen to that amazing voice. Fantastic.”

Yeah, but Cooper mostly growled his way through that.

“I can’t sing, and I can’t dance, so there are limits here.”

While he might not have a singing voice, what Bana does have is a very distinctive voice. And that’s what’s so striking when you listen to The Orchard – and it sounds absurd to say it – is Bana’s broad Australian accent. It’s not quite the full-on Poida from his Fast Forward days, it’s just that you don’t hear it that often when he’s acting. After all, he has only done five Australian films – The Castle, Chopper, The Nugget, Romulus, My Father and The Dry – over the last 24 or so years. And only one US film, Funny People, where he kept his accent. 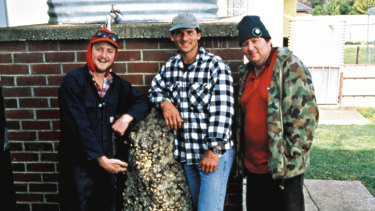 Bana (middle) in The Nugget, with Stephen Curry (left) and Dave O’Neil, one of the few Australian films he’s starred in.

For the rest, it’s been either generic American (Black Hawk Down), raspy superhero/villain (Hulk, Star Trek), standard pan-European (Hanna) or historical British (The Other Boleyn Girl, King Arthur: Legend of the Sword).

“Every time I go to work, I have to do a different accent,” he says. “You’re either doing someone from England or America. So, the idea of being Australian is not even an option for us 99 per cent of the time. [Americans] are always shocked, especially early on whenever I did press junkets, and I’d walk in the room and start talking. For a long, long, long time, I’d go on talk shows and most of the audience thought I was American or British. They had no idea I was Australian.”

He’s never hidden his accent, despite advice from Anthony LaPaglia, who told him it was much easier to go to meetings with an American accent, because that way they didn’t have to “fill in the gaps of how he would sound, which is kind of genius”.

“I just wish there were more Australian characters in cinema,” he says. “I’ve been making noise about that for a million years. It’s completely ridiculous that the world is inhabited by millions of Australians, and they just never appear on film, unless it’s an Australian film.” 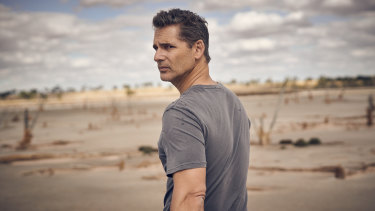 Eric Bana as the Australian Federal Police detective who returns to his home town to investigate an alleged murder-suicide in The Dry.

He decided to do The Orchard for the challenge of having only his voice to rely on.

“There is just no other tool to draw upon, other than the amazing designed soundscape,” he says. “We don’t have lens choices and cameras pushing in and facial reactions and so forth.

“So you approach it the same way you do film because you’ve got a narrative, and you’re breaking all the episodes down and working out the journey, and how you want to approach it, but then you have the constraint of having nothing but the microphone to work with. It’s a wonderful acting challenge and exercise.”

It’s the second cop Bana has played in a row, after this year’s thriller The Dry, in which he played a city copper returning to his country hometown to solve a murder. At 53, does that mean he’s moved into the grizzled cop phase of his career?

A lot of women actors get told they age out of roles, does that ever happen for blokes?

Does that mean he’s now officially a silver fox?

“Well, I don’t really have much choice,” he says, laughing. “I’m not a black-haired fox, I won’t be doing that any time soon. It’s gonna be silver fox or nothing for me.”

When it comes to choosing roles, Bana tries to be open, but he is cautious about playing any type of violent figure again. “I’m very careful about who I work with,” he says. “So if I’m going to go down that road, I’m really doing my due diligence on the director. I’m really careful with who I entrust those stories to.”

So, it has to be the right kind of murderer?

Comedy isn’t off the table, either, though the pickings have been slim. The last one he did, Special Correspondents in 2016, was with Ricky Gervais, in which Gervais got to keep his British accent but Bana, you guessed it, had some southern fried US accent going on. 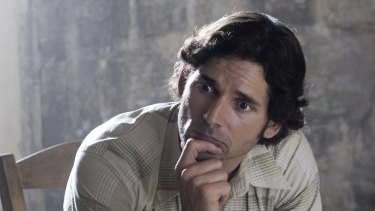 Bana in Munich, one of the films he rates as a personal favourite.

“I can’t say my comedy pile is as thick as my drama pile,” he says. “I’m not angry about that. It is what it is. I’m very happy with the stuff I get offered. But yeah, I’d definitely be open to more comedy if it was more offered for sure.”

OK, then, here’s my pitch: What about a singing, dancing comedy? Surely, that’s tempting?

“Or a singing, dancing psychopath,” he says, laughing. “Now we’re getting somewhere. I could be a bad singer and a bad dancer but still a psychopath or a sociopath. Now you’ve got me.”

Bana has been home in Melbourne for the past few years and is in no hurry to return overseas. He flew to Western Australia earlier in the year to film a small part in Robert Connolly’s next project, Blueback, adapted from a Tim Winton novel, and is still tinkering on the script for a planned film about the 1960s-70s British motorcycle champion Mike “The Bike” Hailwood.

Does he have a favourite film of his own?

“Of course, I’ve got a favourite,” he says. “I just never say publicly. To be honest, there’s probably five or six that I can’t separate from each other, that were such incredible experiences and, you know, it’s also the time in your life that you do them, the people you’re working with and the subject matter. There’s probably one that’s my favourite as a moviegoer to watch and then there’s others that are super special because of what it was like to work on.”

It’s a diplomatic but far too vague answer. Come on Eric, can you just throw this pigeon a crumb?

“Well, I’ll throw two out there. I can confirm that The Dry and Munich are definitely in that group.”

It’s been a while since he watched Munich – in which he plays a Mossad agent leading a mission to assassinate the 11 Palestinians responsible for the deaths of 11 members of the Israeli team at the 1972 Olympics in Germany – but he will watch another, Black Hawk Down, if he is channel flipping.

“That film still today is one that will stop me for five minutes,” he says. “Because every scene is just someone amazing, someone absolutely amazing. So, Black Hawk Down I can get hooked into for five or 10 minutes because I’m just watching friends working.”

Speaking of, ahem, friends, is he sure Hugh Jackman can’t help him out with his musical ambitions?

“I think I’d be out of his scope of works,” he says, laughing. “I don’t think he could do much with me at all.”

The Orchard, an Audible Original podcast, is released on September 9.