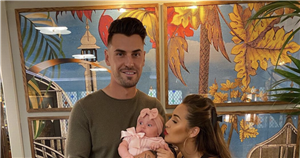 Ex On The Beach star Chloe Goodman has announced that she is expecting her second child with fiancé Grant Hall.

The reality star, 28, who is set to give birth in March, has revealed that the baby will be the couple's last as she has been warned by doctors due to her high risk pregnancy.

Chloe and Grant, 29, share one year old daughter Isla and were 'absolutely thrilled' at the prospect of welcoming another baby into the family.

But what do we know about Grant? Let's take a look…

What does Grant do?

Grant is a footballer for Middlesbrough Football Club where he plays as a defender after previously playing for Birmingham City, Tottenham Hotspur and Brighton & Hove Albion.

Where is the footballer from?

Grant was born in Brighton and joined his hometown club aged 18. The footballer has 'Brighton' in his Instagram bio where he has garnered 12,700 followers.

When did Grant propose to Chloe?

Grant popped the question to Chloe, two months after announcing their pregnancy news, at her baby shower in January 2020 and told The Sun: "I asked for her dad's blessing about six to eight weeks before.

"I always said I wanted to do it at the gender reveal, I knew it would be the element of surprise for her, she won't expect it."

How did Grant and Chloe meet?

Chloe has previously revealed that the couple met during 'a really bad time' in their lives.

The brunette beauty told The Sun: "We met at a really bad time in our lives; I had just broken up with my previous fiancé and also lost a child. I moved back to my Brighton home town and had to pack up and close my clinic and start again.

"[Grant] had just gone through a break up as well and was dealing with a terrible time in terms of football – he didn't know if he was going to play again."

It appeared that the couple were destined to cross paths with Grant moving next door to Chloe's dad Sean before the pair had even met.