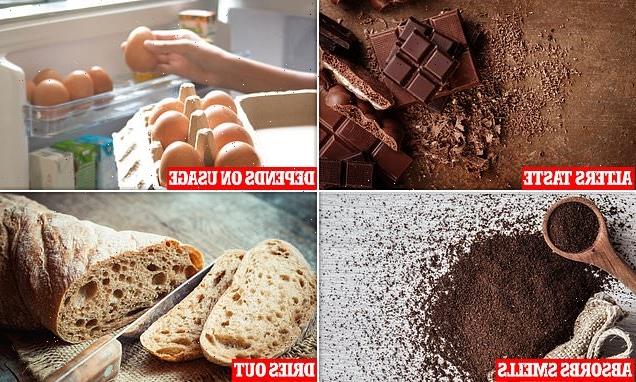 Are YOU storing your food all wrong? Expert reveals the groceries that should be never go in the fridge – after James Martin insisted you should keep eggs out of the cold

Experts have weighed in as the age-old debate is reignited: Where do you store your eggs?

TV chef James Martin, 50, rehashed the argument yesterday on This Morning, where he said that people should never store their eggs in the fridge, because they are porous and will absorb the flavours of the items around them.

However, British nutritionist Kate Llewelyn-Waters told Femail that where to store your eggs depends on what usage you plan to make of them, adding that eggs used to make mayonnaise should be put in the fridge, while eggs that will be poaches or fried should be stored in a dry cupboard.

She added that some types of ingredient, including fruits like mangos, apples and watermelons, should never be refrigerated because it can cause them to harden, lose their flavour or colours. 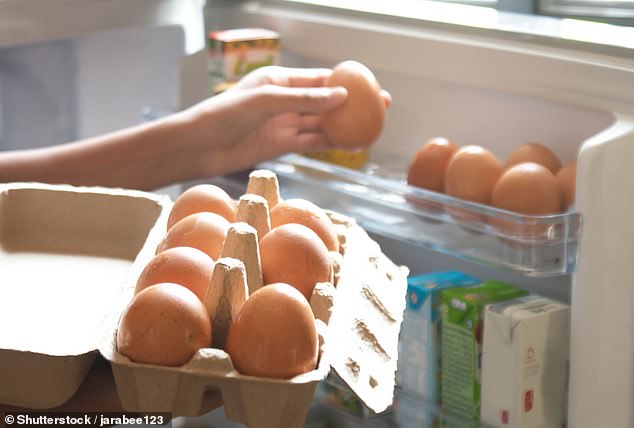 British experts have weighed in on the age old question of how you should store your eggs and why. Stock picture

James Martin was adamant that eggs don’t belong in the fridge as he appeared on This Morning yesterday to demonstrate how to prepare Victoria sponge cakes.

He explained to viewers that eggs should ‘never be stored in the fridge’ as they are porous, advising the cupboard instead. The celebrity chef explained the texture of the shell causes them to absorb other flavours.

James’ comments are despite the fact the eggs are kept fresher in the fridge, meaning they also last longer. 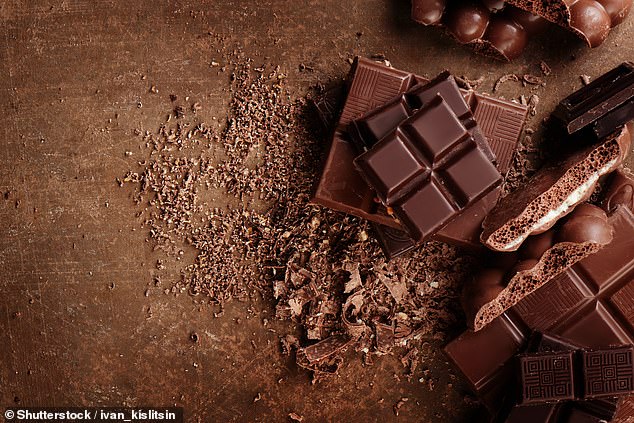 Kate Llewelyn-Water explained that the most important factor to think about when storing your eggs is the way you plan on using them.

‘Whilst US advice is to refrigerate eggs, current European advice is to store your eggs in a cool cupboard, as it is believed that condensation in the fridge can lead to bacteria multiplying,’ she said.

‘It appears lots of people think eggs should always refrigerated, however, how you plan to use your eggs determines how they should be stored. 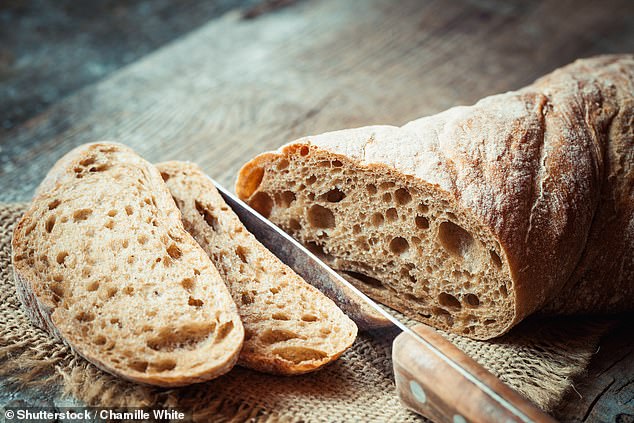 Putting bread in the fridge will dry out, Kate warned. She advised to freeze the bread rather than refrigerating into for days on end. Stock picture 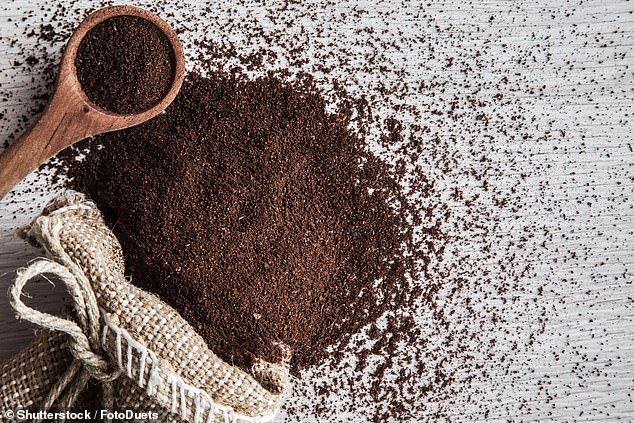 Kate said that coffee can absorb strong smells from your fridge – including cheese smells – and advises against refrigerating it. Stock picture

‘If you plan to separate the eggs to make mayonnaise for example, keeping them in the fridge is best, as the yolks remain firmer,’ she explained.

She added that eggs that will be fried or poached should stay in a cupboard at room temperature, because ‘when you fry a chilled egg it decreases the oil and pan temperature, so frying takes longer.

‘Likewise, if poaching an egg, a chilled egg from the fridge lowers the temperature of the water, so it cooks more slowly and may increase the risk of the white spreading,’ she said.

But on some occasion, like with scrambled or boiled eggs, where you store them doesn’t matter.

‘A chilled boiled egg will take a little longer to cook, however, the result will be the same as using an un-refrigerated egg,’ she said.

Kate also offered a hack to make sure you keep your eggs in tip top shape.

‘One tip which I always find helpful is that if you do keep eggs in the fridge try not to store them in the egg holders that are often found in the fridge door.

‘This is because when you open and close the door it shakes the eggs, and then when you break the egg it may split more easily. Instead, I recommend storing them in an airtight container (to reduce losing moisture) near the back of the fridge,’ the expert added.

What other items should NEVER be put in the fridge?

SOME FRUIT AND VEG

‘Whilst it won’t actually harm the vegetable or fruit, it may affect the taste and/or appearance, for example, sweet potatoes will harden, and watermelon will lose its bright pink colour.

‘There are also some root vegetables, such as potatoes and squash, which can also be affected by the cold temperature of the fridge, and this can cause them to rot – so keep these foods and also onions in a cool, dark cupboard.

‘You may have seen what happens when you put a banana in the fridge – the skin turns brown and blotchy, because bananas are not at all suited to a cold environment,’ Kate said.

‘Aware that it is being ‘damaged’, a banana will trigger its own defence mechanism by releasing an enzyme called PPO in the cells of its skin, which makes the skin then turn brown. It is this enzyme that makes your apple turn brown, too, once you have cut it,’ she explained.

Kate advised that keeping your olive oil in the fridge can do more damage than good.

‘The optimal storage temperature for extra-virgin olive oil is around 15°C, which is cooler than room temperature, but warmer than the fridge temperature,’ she started.

‘If you chill the olive oil and the temperature reduces, the most stable fats in the oil turn solid, which leaves the more unstable triacylglycerol molecules in liquid form,’ she added.

She also said that refrigerating olive oil can reduce its health benefits.

‘Keeping olive oil in the fridge as it can reduce its health-promoting antioxidant activity. Nut and seed oils can last for longer when kept in a fridge, but you may notice them solidifying or looking cloudy,’ she said.

‘Coffee, like eggs, I find confuses a lot of people,’ Kate said.

‘If you keep coffee in the fridge this can really affect the flavour adversely, because of condensation,’ she explained.

The expert added that keeping the coffee in your fridge can have a lesser known impact.

‘Coffee grounds contains nitrogen and acts like a deodoriser, so it basically absorbs and eliminates odours. If it is kept in the fridge alongside other foods that also have a strong smell, such as certain cheeses, fish and meat then the coffee grounds may ‘soak up’ these odours, which may spoil it,’ Kate explained.

‘So, the best way to make sure your coffee’s aroma isn’t spoilt, is to store it in an airtight container in the cupboard and avoid refrigerating it,’ she added.

Some people might be keeping their bread in the fridge to make it last longer, but it’s not a good idea, Kate revealed.

‘Keeping bread in the fridge will dry it out and make for a very untasty sandwich, as when bread is stored in a cold, but above freezing temperatures, then the going stale process can happen much quicker than in warmer temperatures,’ she explained.

‘This is due to a complex scientific explanation known as the “retrogradation and recrystallisation of starch.”

‘However, freezing bread can slow the process down significantly, so if you aren’t going to be eating the bread straight away, then it is preferable to freeze it and get slices out as and when they are needed.

‘If you only plan to use the bread for toast, potentially, you could keep it in the fridge, but the freezer would be a better option,’ she added.

The debate over whether to store chocolate in the fridge or in the cupboard has also been raging on for years.

‘Keeping chocolate in the fridge can significantly change its flavour and texture,’ Kate explained.

‘Cocoa butter absorbs odours and flavours, and if it’s kept in the cold temperature of the fridge, it won’t allow you to taste the more subtle flavours that you usually get in high-quality chocolate,’ she added.

The expert also revealed that a white layer can appear on your chocolate, which is caused by condensation on the surface basically dissolving or thawing and some of the sugar re-crystallising.

‘So it can drastically change the texture and taste of your chocolate and not in a good way,’ Kate said.

‘Therefore, it is best to store your chocolate in an airtight container in a cupboard, which will keep it away from any strong odours and flavours that could alter its taste,’ she added.