A fathers’ rights activist left Kate Garraway seething as he unfastened his trousers live on Good Morning Britain in a lewd stunt.

Matt O’Connor, the founder of campaign group Fathers4Justice, appeared on the breakfast show to argue against calls for Father’s Day to be banned, as it’s no longer relevant in today’s society because of the increase in blended families.

He fumed: ‘If people want to get rid of Father’s Day because of blended families, well have your own day. Don’t hijack our day.’

Despite support from Kate,  Matt grew increasingly angry and claimed he had been ‘treated like an outcast’ in the ITV studio ahead of his appearance, before unzipping his trousers.

A panicked Kate and her co-host Ranvir Singh pleaded with him to stop as he whipped out some stuffed furry balls and threw them on the desk in front of them.

The balls were made by grandmothers who staged a ‘knit in’ earlier this week outside the Houses of Parliament in support of Fathers4Justice. 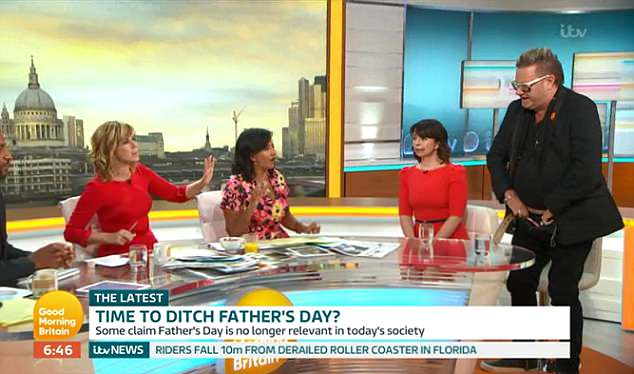 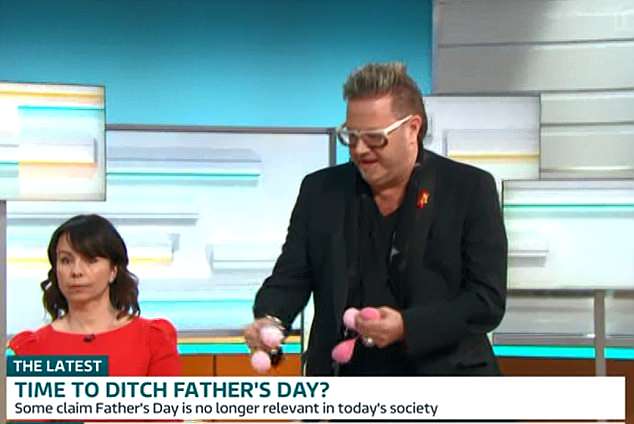 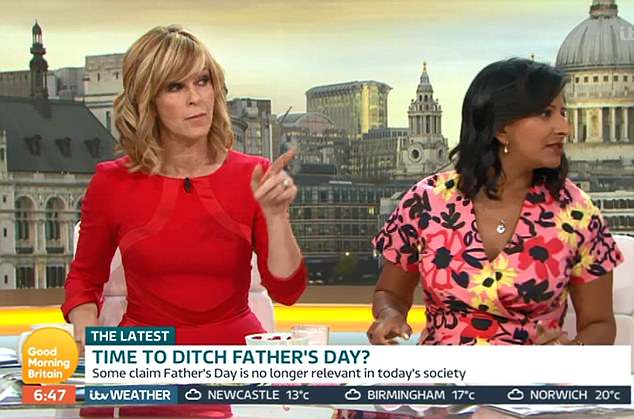 During the heated debate, Matt claimed that for some in the country, the day marked a ‘national tragedy’ because many children don’t get to see their parents due to individual circumstances.

‘Father’s Day is every day, but it is really important to be valued. We value mothers we have a Mother’s Day.

Presenter Ranvir, who is a single mother, explained that she grew up without her father who died when she was nine and found the day uncomfortable. 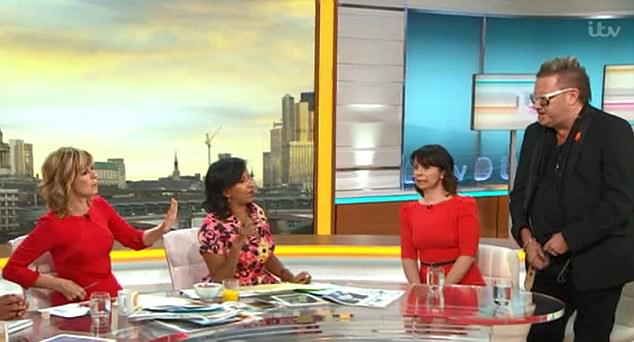 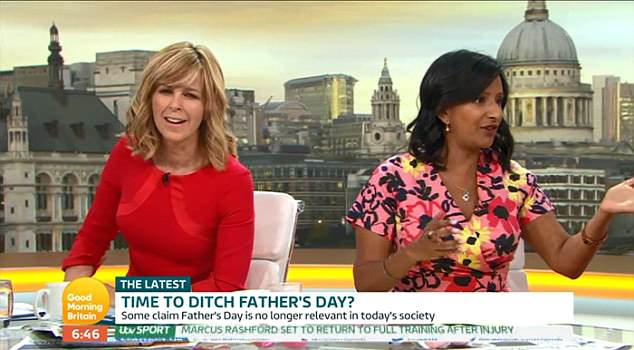 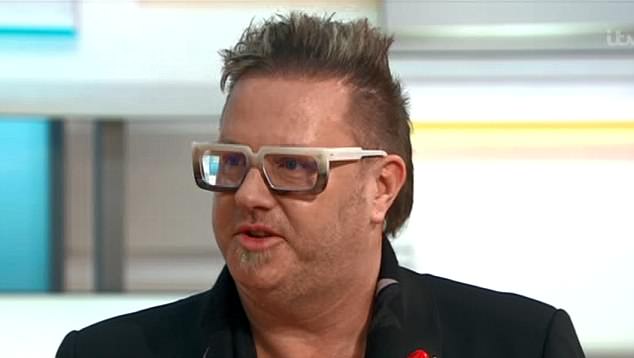 WHO IS MATT O’CONNOR THE FOUNDER OF FATHERS 4 JUSTICE?

The father-of-three from Thanet, Kent, campaigns for the rights of fathers in the UK.

The group aims to gain public and parliamentary support for changes in UK legislation on fathers’ rights.

Matt appeared most recently on Good Morning Britain where he unzipped his trousers and pulled out a pair of fake balls in front of horrified hosts Kate Garraway and Ranvir Singh.

Most notably activist Jason Hatch scaled the walls of Buckingham Palace dressed as Batman in September 2004. He was arrested but all charges were later dropped. 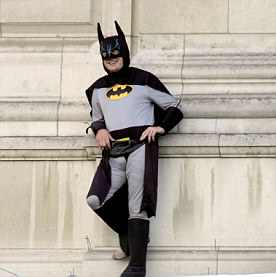 Fellow guest, child development specialist and mother-of-two, Ollwyn Moran, looked on in horror, as Matt claimed he had been treated like an outcast and abruptly stood up and unfastened his belt.

‘I wanted to say one important thing, I’ve been treating like an outcast today in this studio,’ he claimed as he grappled with his trousers.

‘I was put, not in the green room with Ollwyn, I was dumped outside.

‘I’ll show you my balls. For Father’s Day,’ he said as he threw the fake balls.

Ranvir and Kate immediately explained that there was a ‘technical reason’ the guests were separated, saying that it was normal procedure when conducting debates.

But Matt refused to accept the explanation: ‘It’s not. I’ve been coming here for the last 20 years, and have never been treated like that, to be singled out.

‘That is just typical of how we treat fathers,’ he said.

An unimpressed Kate added: ‘It is a shame, because I think you have slightly let dads down there by that stunt.’

A spokesperson for GMB supported Kate’s explanation, saying of the incident: ‘Matt O’Connor was invited on to GMB this morning to debate the role of Fathers Day in today’s society.

‘Rather than engage properly in the debate he decided to pull an obviously pre-planned publicity “stunt”.

‘His unfounded claims on “being treated so badly” were seemingly part of this pre-planned ‘stunt’.

‘As Kate said it is the norm to separate guests before taking part in a debate on the programme and as Ranvir said on air we have never had any such comments previously and pride ourselves on treating all of our guests equally well.’

Good Morning Britain airs weekdays on ITV from 6am

Why are grandmothers supporting Fathers4Justice?

On Monday 11th June, grandmothers who do not see their grandchildren because their sons have lost access staged a ‘knit in’ outside the Houses of Parliament.

The grandmothers have knitted 650 pairs of pink fluffy, woollen ‘balls’ to give to every MP in the country to highlight the plight of separated dads.

Jenny Browne, a 72-year-old grandmother and ‘knitivist’ from New Malden, said: ‘The Family Court made an order for shared residency for my son, but then they just sat back and did nothing when his daughter – my granddaughter – was taken away.

‘We were heartbroken – it was like a living bereavement.’

‘I hope that our knit-in will be a humorous way of raising awareness about a very serious issue – the three million plus children who live in fatherless homes and won’t see their dads on Father’s Day.’

Great-grandmother Edna Cosnett, 93 – affectionately called ‘Nanny Bubbles’ by her family – is another ‘knitting nan’ lobbying MPs in support of her grandson, who hasn’t seen his daughter in two years. She said: ‘I’m 93. A year older than the Queen. I went through the war, was bombed every day, I’m a tough old lady. But this is so so hard. All I do is cry for my grandson.’

Grandmother Susan Stamper, 69, who hasn’t seen her grandchild in 20 years said: ‘Not seeing her has affected mental health. It changed my life. The worry is constant. My son was destroyed.’ 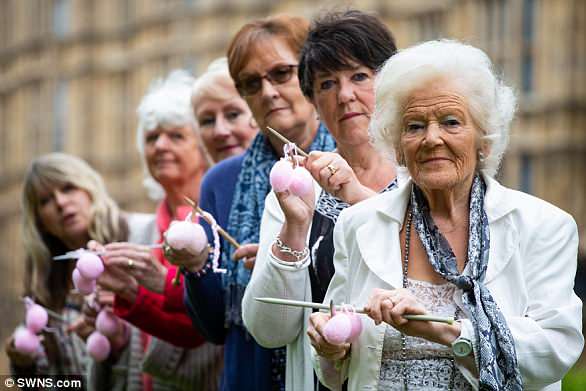