A female project manager has given an insight into life on a construction site while heavily pregnant – joking that she managed to ‘build two things at once’.

Michelle Hands, 33, from Leeds, worked on the building site of a new retail park until she was over seven months pregnant.

The freelance project manager admitted she was unsure about how the builders would react to her pregnancy at first, but said her colleagues were all very supportive.

Michelle continued doing paperwork in the office until she was eight and a half months pregnant, before she and husband Tom Quarmby, 34, welcomed baby Archie into the world.

The mother-of-one has now decided to share her experience as a pregnant construction worker in order to inspire other women and girls. 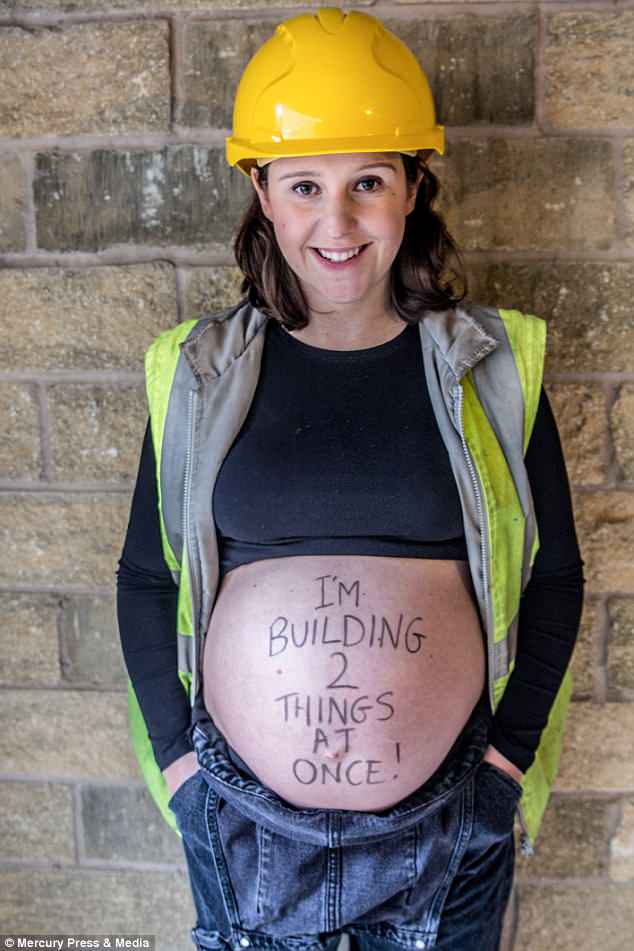 Michelle Hands, 33, (pictured at 36 weeks pregnant)  from Leeds, has given an insight into life on a construction site while heavily pregnant

Speaking about her pregnancy, Michelle said: ‘Tom and I were so excited when we found out I was pregnant but I was dreading the idea of breaking the news to the team.

‘I wasn’t sure how it would be received or if I would be let go straight away. Being self-employed there’s no maternity pay so I needed a plan.

‘Wearing big high-vis clothes I could hide my baby bump for a little while while I decided what to do. It was definitely noted that I was using the portaloo more often.

‘I’m pretty sure everyone noticed that I was eating for England as well. I would come in with a packed lunch and it would all be gone by 9am.; 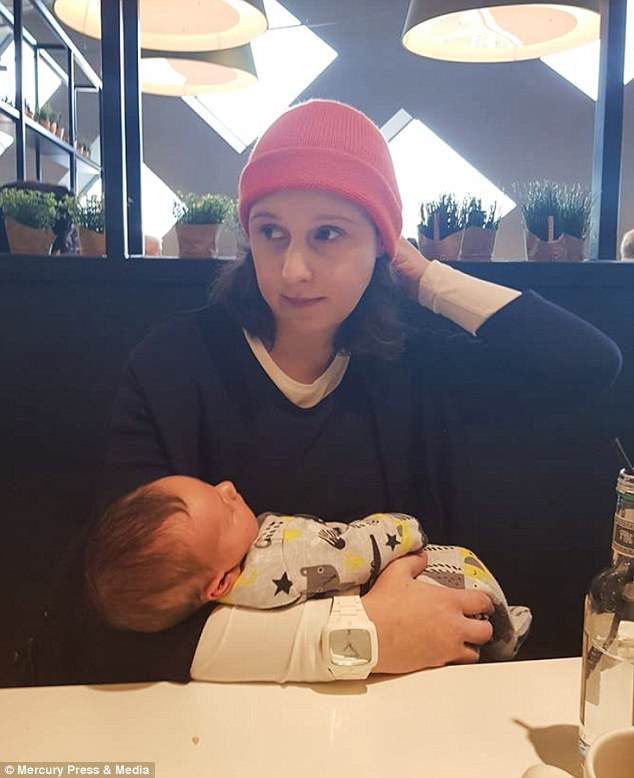 Michelle welcomed baby Archie into the world six weeks ago, having continued working from the office until she was eight and a half months pregnant 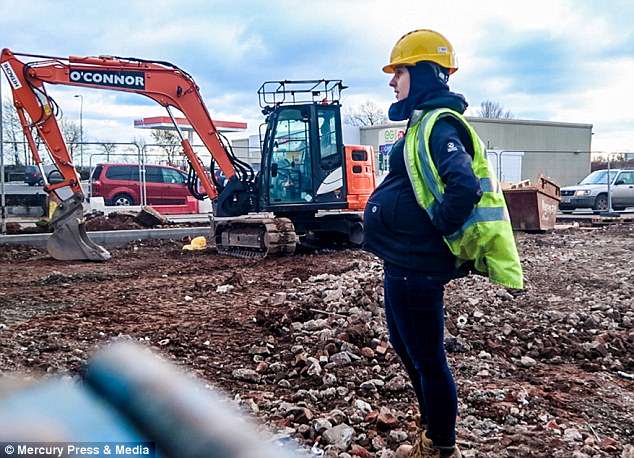 Michelle explained how she told the colleagues her news when she reached the 14 week mark.

‘I was conscious of it from a health and safety point of view and obviously for the safety of my baby and myself, it was coming to the point where I couldn’t keep doing all the physical side of my job,’ she said.

‘Everyone took it really well. They told me to keep working for as long as I wanted to and loads of the guys I work with have families so they were really excited for me.

‘I did get the occasional comment pulling me up on stuff if I was suffering a case of baby brain but I would just come back with “I’m building two things at once” and they couldn’t say anything else. It was the best response.’

Michelle revealed how the retail park project was actually the first time she had taken on a project management role. 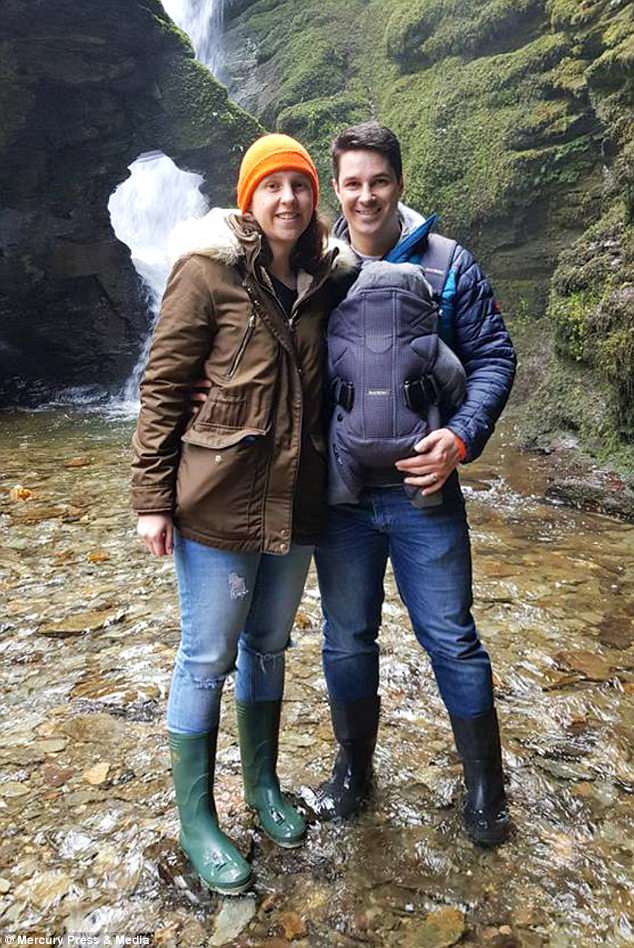 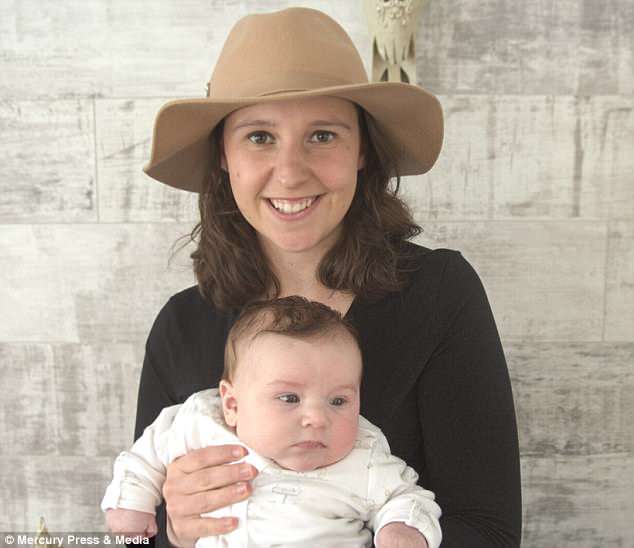 ‘I did it all while pregnant so my hormones were all over the place but I just got on with it and did my job,’ she said.

‘At the time I didn’t see it as anything special but when I got to the end of the project I thought “Wow, people say women can’t do this and can’t do that but we can”.

‘It was never easy project managing, engineering and building a tiny human at the same time.

‘But I am so glad I battled through to prove that women shouldn’t be scared to commit to a career in construction for fear of also wanting to become a mum at some point.

‘As long as you take care of yourself physically and keep a stress-free mind, it can be done. I hope sharing my experience shows girls out there that you can be both a mother and engineer.’ 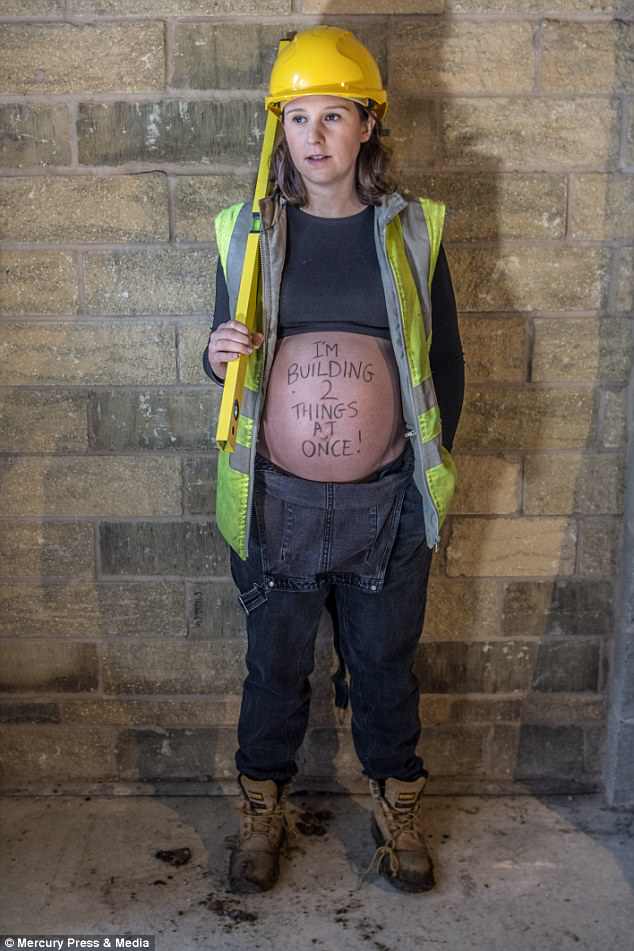 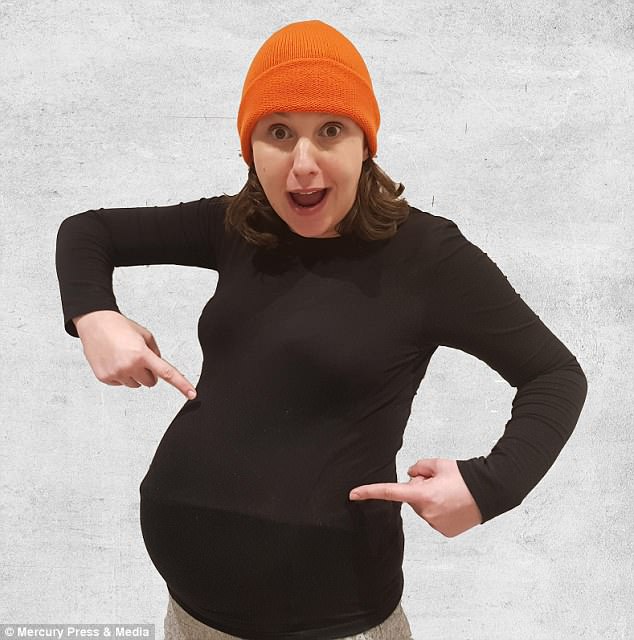 After finishing a geography degree, Michelle had been struggling to decide on her next step as she knew she would ‘never survive’ a desk job.

When a friend recommended an environmental job working alongside a construction company, Michelle decided to give it a go.

What was meant to be a temporary stint liaising between construction companies, their clients and the environmental agency soon turned into a 10-year career as Michelle loved the nature of the work.

Michelle then decided to delve more into the engineering and construction side of the building industry in 2014 and hasn’t looked back.

Stepping onto building sites dominated by men and their ‘pack mentality’, Michelle has faced more than her fair share of obstacles with some male colleagues telling her ‘women don’t belong in construction’. 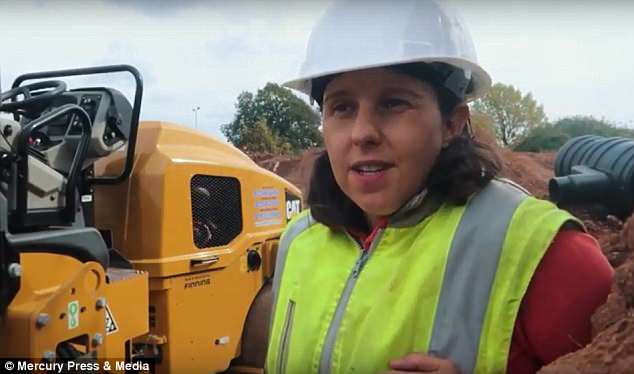 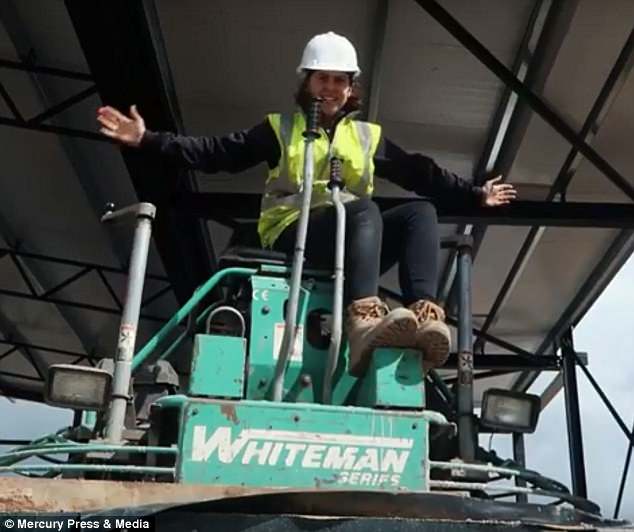 Michelle has also witnessed the catcalling and crude comments towards other women that builders are renowned for and feels it is her duty to make a difference.

As an engineer and project manager, Michelle surveys the sites, marks out the plots by hammering giant pegs into the ground with a sledge hammer and manages the construction process.

While she certainly stands out on construction sites at just 5ft 5ins and 9st, Michelle has fought to prove she can pull her weight – both mentally and physically.

And Michelle, who is determined to inspire girls to pursue their dream job even if it defies feminine stereotypes, says she is ever grateful to her parents for supporting her career choice.

Explaining why her career choice has worked for her, Michelle said: ‘I’m very sociable. I like meeting different people every day and being outdoors. Engineering is the perfect mix of both, it’s great. 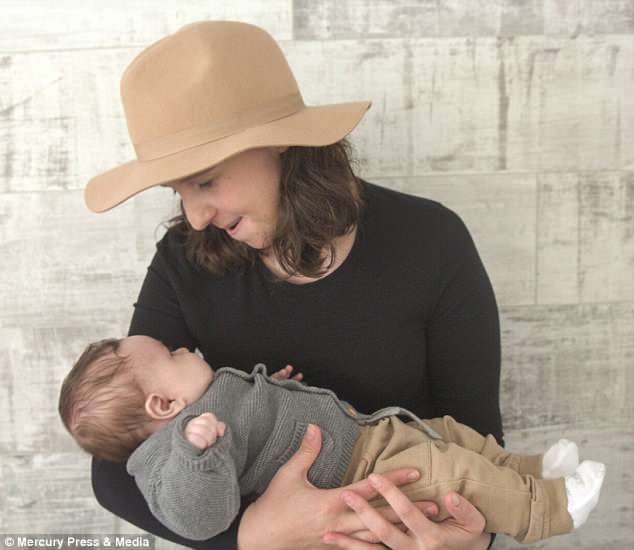 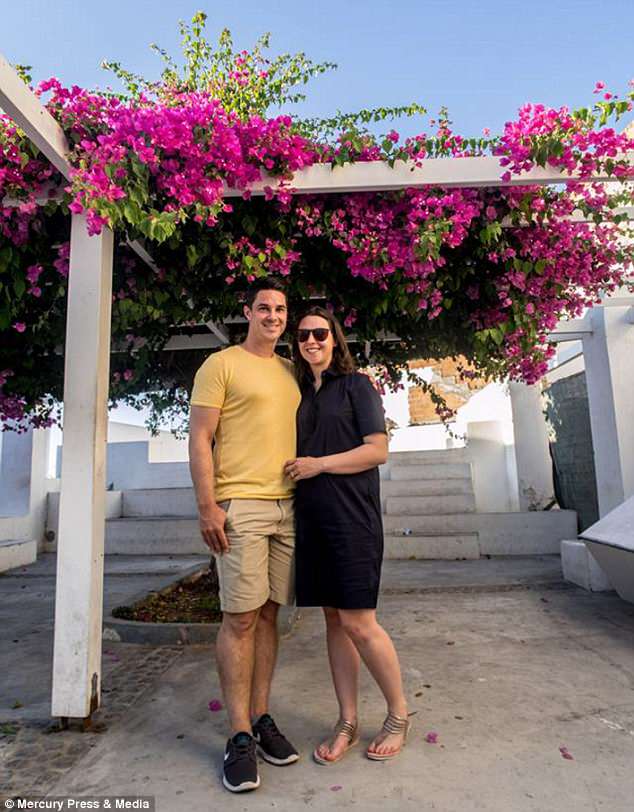 ‘Don’t get me wrong, there are times when it’s the middle of winter and I’m stuck out on a building site and I curse myself but during the summer it’s beautiful. Like any job you take the rough with the smooth.

‘Eighty per cent of the time it is the best job in the world but it hasn’t been easy. I work in a heavily male dominated field and I do get sexist comments.

‘I’ve had people ask me if I’d rather be behind the counter at Boots and tell me women don’t belong in construction. I’ve even had architects refuse to work with a female engineer.’

She continued: ‘There is definitely a pack mentality on a lot of building sites and it can be tough. A lot of it is bravado.

‘But when I get out there and show them I can do the job, my biggest naysayers have become my biggest supporters. They’d be horrified to be reminded of how they first reacted to me. 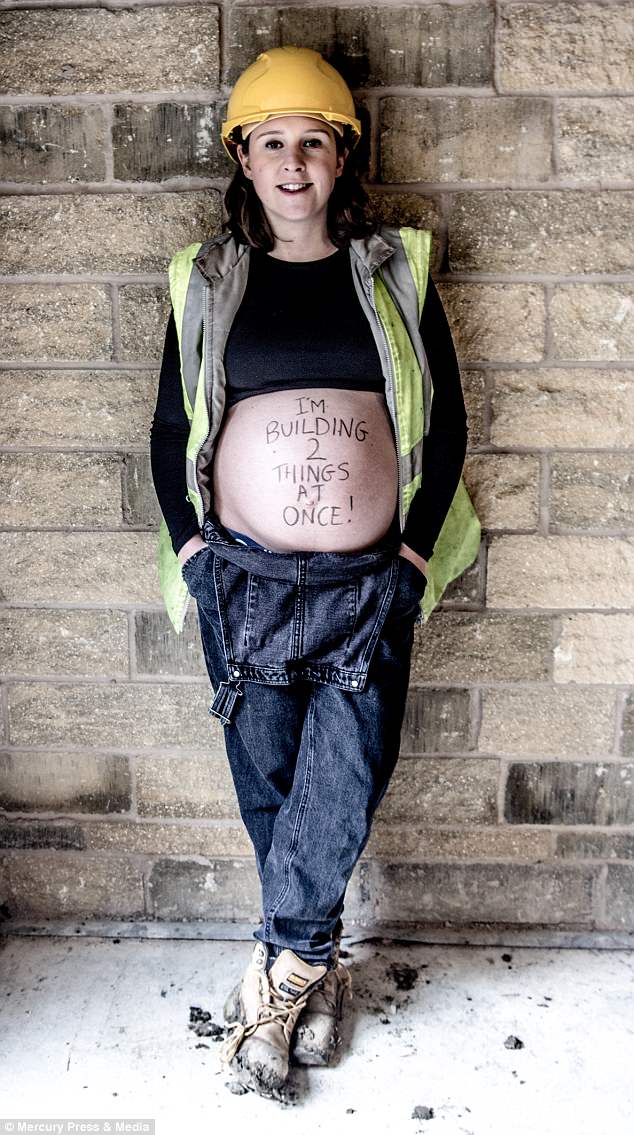 ‘I used to worry about trying to prove myself physically. I’m a lot smaller than all the guys so I do stand out and I’ve yet to find high-vis wear that fits a woman.

‘I remember the day I got my first 18-year-old apprentice and he was flagging so I had to take the sledge hammer off him and finish off hammering in his pegs and I realised I had nothing to prove.’

However, she says a lot of the sexist remarks have been directed at other women.

Michelle said: ‘I have had one comment before about my tight jeans being distracting on site but most of the catcalling and comments like that get directed at other women.

‘I see women cross the street to avoid walking past the building site and I don’t blame them at all. 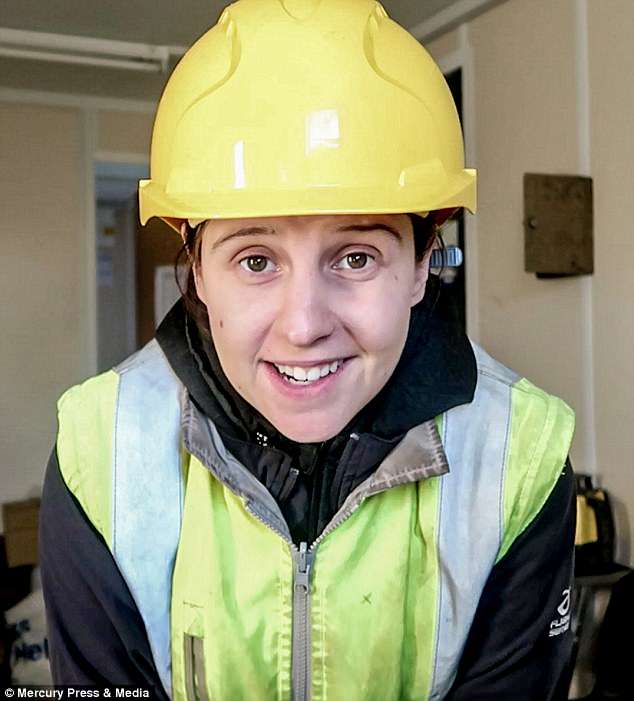 Michelle admitted she has faced some sexism in the industry, as well as seeing sexist remarks directed to other women

‘But if I ever hear anything like that said in front of me I’ll reply “oh I didn’t realise you all think you look like Brad Pitt” and it shuts them up. It’s like they all think they’re Channing Tatum or something.

‘But if you point it out to them like that so it’s still a bit funny then they soon get the hint.

‘I feel like as one of so few women working in construction I do have a duty to try to tackle those sexist attitudes and put them in their place a bit.’

She added: ‘I want construction work to be an environment that more and more women want to come into because so many women and girls are so capable of working in this industry.

‘I think a lot of girls want to but they don’t get the encouragement at home or at school. I can imagine a lot of parents being worried about their daughters going to work on a building site.

‘But they can do it. Girls don’t need to go into jobs that are stereotypically for women, they can do whatever they want to.

‘I’m so glad that my family and my parents have been so supportive of that. I come from a long line of strong women.

‘While I do think my mum sometimes wishes she got to see me in a dress more often, they really couldn’t be more proud.’