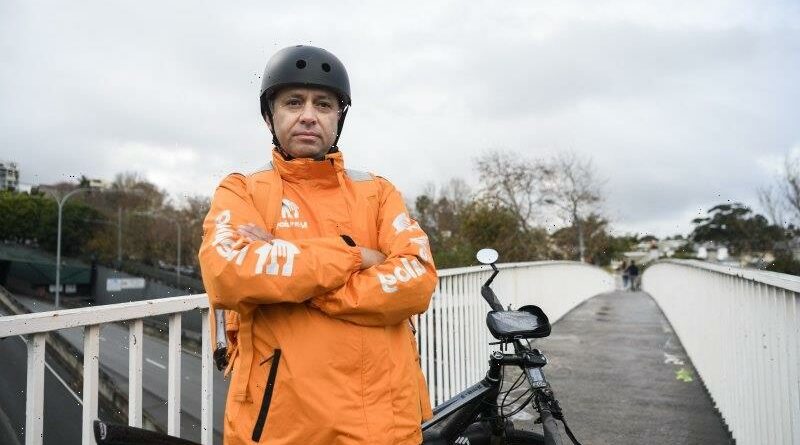 Menulog has become the first major gig economy delivery company to directly employ workers, two months after it announced it would trial a move away from the independent contractor model that has been criticised for lacking unfair dismissal protections and a minimum wage.

One of the new employees, 46-year-old hospitality worker and courier Peter Sears, said he had worked for different companies doing deliveries over the last five years and enjoyed the work. 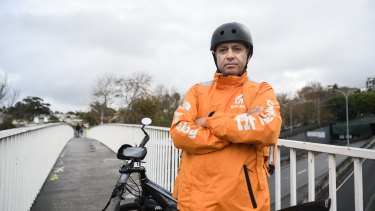 Peter Sears is one of the first workers to be directly employed by a gig economy delivery company.Credit:Rhett Wyman

“It’s a lifestyle choice for me,” he said. “I’m out on the road making money, it’s great.”

But the company’s Australian managing director Morten Belling said the company would not permanently switch to an employment model wholesale without the introduction of more flexible industrial laws to address what it sees as unaffordable penalty rates of up to $50 an hour.

“We would never sign up for anything where we think it’s going to cost us too much,” Mr Belling said. “That will break our business, and it will mean that restaurants are going to shut down, we’re going to not be able to engage with as many couriers as we want, and people are going to lose jobs.”

Labour standards in the food delivery industry, which counts Uber Eats, Deliveroo and Menulog among its largest players, have come into focus in recent months after a number of riders died on the job.

The Transport Workers Union has blamed those deaths in part on systems that push drivers to ride faster and for longer. Menulog has not reported any fatalities among its workforce, but cited those deaths as part of its decision to move to an employment model.

It has signed up 10 part-time riders in the Sydney CBD so far as it heads for a total trial of 100. Most are using their own bikes, which they receive a subsidy for using, and are given a Menulog uniform as they complete shifts that are typically four hours long.

Mr Sears said he is often doing a four-hour shift in the morning and another in the afternoon. Being an employee offers security in a dangerous industry, he said, in contrast to other companies, which he called “scumbags”.

Menulog is using the Miscellaneous Workers Award, which comes with a minimum pay rate of $20.33 an hour, the national minimum wage from Thursday. However, workers can earn much more on weekends and public holidays, which come with a 250 per cent penalty rate.

Uber and Deliveroo have long defended their employment model, saying they create jobs for riders who like the flexibility of setting their own hours. In NSW the industry has agreed on new safety measures in partnership with the government.

Mr Belling, the Menulog director, said the purpose of the trial was to evaluate what costs and shift patterns were sustainable. “We need to understand financially: can the industry carry this?” Mr Belling said.

Menulog hopes to strike a deal with the Transport Workers Union to create a new set of pay rules for the gig economy industry.

Internationally, Menulog’s parent company declared in its last annual report that it has about 20,000 employed couriers. However, it also had 157,000 independent couriers. “This model is easily scalable and highly flexible, as well as provides independent contractors with flexibility over how they want to work,” the company said.