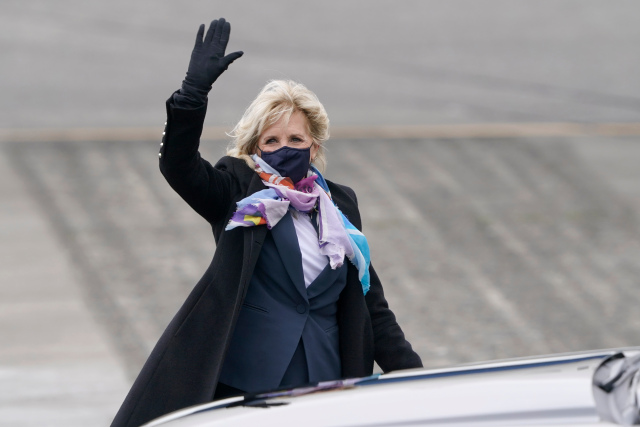 Love it. Hate it. Debate it. When it comes to first ladies’ fashion, everyone has an opinion.

The everlasting intrigue of first ladies’ designer choices and how those decisions can help fuel the economy were among the many takeaways from a virtual talk Friday.

The Washington Post’s senior critic at large Robin Givhan led the “Fashion and the First Ladies” discussion with fashion historian Carson Poplin, Oscar de la Renta co-director Fernando Garcia, and The Museum at the Fashion Institute of Technology’s Director and chief curator Valerie Steele. From Michelle Obama championing American designers to Hillary Clinton’s penchant for pantsuits, the panelists delved into how fashion plays into politics, history and making or breaking public policy. The hourlong virtual talk was organized by the Fashion Group International and New York Women in Film & Television.

Referring to a quote from Arnold Scaasi, who worked with Marie Eisenhower, Barbara Bush and other first ladies, Givhan said that he said the role of the designer is “try to help them make the best pictures as often as possible.”

Poplin and Garcia agreed about the sense of relatability that first ladies offer through their fashion and how that can inspire others to emulate that style or be like her. “That’s why they obsess because they can connect with them in other ways that are acquirable. They can go to a store and find a look from that designer and feel connected to them somehow,” Garcia said.

Obama’s support of a wide range of American designers, especially young ones, made her a favorite with all of the panelists. (Her choice of a Versace chainmail gown for a state dinner was another winning point with the speakers.) Poplin said, “She used fashion as a tool so effectively. In her book, she writes about how she almost resented the attention that was paid to her fashion. But instead of feeling like it was a burden, she always used it as an opportunity. If someone is going to look at what I’m wearing at this event, then maybe they will also focus on the event and pay attention to why I’m there.”

Asked about the way that race was a lens through which Obama’s style was viewed, Steele said, “I think that because of the long history of racism in the United States, it was inevitable that certainly some of the commentary on how she looked would be influenced by that. The idea that she perhaps didn’t know how to dress, that she showed bare arms or that she wore a sweater instead of something more formal to a formal event. The implication was perhaps unintentionally racist that she didn’t know any better. Whereas in fact, she was incredibly stylish and adept at using fashion to convey a range of messages, including that she was very much a first lady, she understood all of the requirements of that position. But also I think she was saying that she was a Black first lady,” adding that she made a point of celebrating lesser-known designers, including ones that were Black, Latina and Asian American to call attention to the fact that creativity is a diverse field.

As for whether celebrating American design is part of the role of the first lady, despite the lack of a clothing allowance, Garcia said, “Absolutely. We’re not short of talent here in America. There is so much that she can wear. As long as she feels that person is helping her to communicate what she wants to communicate, then I did my job well. If she feels more confident and doesn’t have to think about what she’s wearing and she can focus on doing her job, then I did my job well.”

Having dressed First Lady Jill Biden and Vice President Kamala Harris in Oscar de la Renta, Garcia said their teams have indicated that they plan to support American designers. That is an interesting development since Biden’s press secretary Michael LaRosa recently informed WWD that as a standard policy, her clothes will not be discussed.

Having spoken with Harris’ team Friday morning by chance, Garcia said, “They are interested in and are focused on making a push for American fashion. I was just very happy that they are focused on incentivizing this economy of ours. They are determined to make it a point.”

Reached after the virtual talk, Garcia said that he has heard from stylists who work with Harris and Biden that they want to support American fashion. “I think that’s a wonderful thing to do.”

With a keen appreciation for fashion and friends like James Galanos, Nancy Reagan regularly wore the best of American fashion, Givhan said. Yet, first ladies are expected to wear styles that are available to the average American person. Poplin said, “It’s a damned if you do, damned if you don’t situation in a lot of ways. We want to be able to relate to them and go out and buy the dresses that they wear. One of the reasons we liked Jackie Kennedy so much was that she was aspirational. You could dress in the Kennedy style. But if you did, it was probably the department store version or you made it from a pattern. So you’re wearing something that’s filtered down in the fashion system…but if you can go out and buy the real thing, that’s even better.” 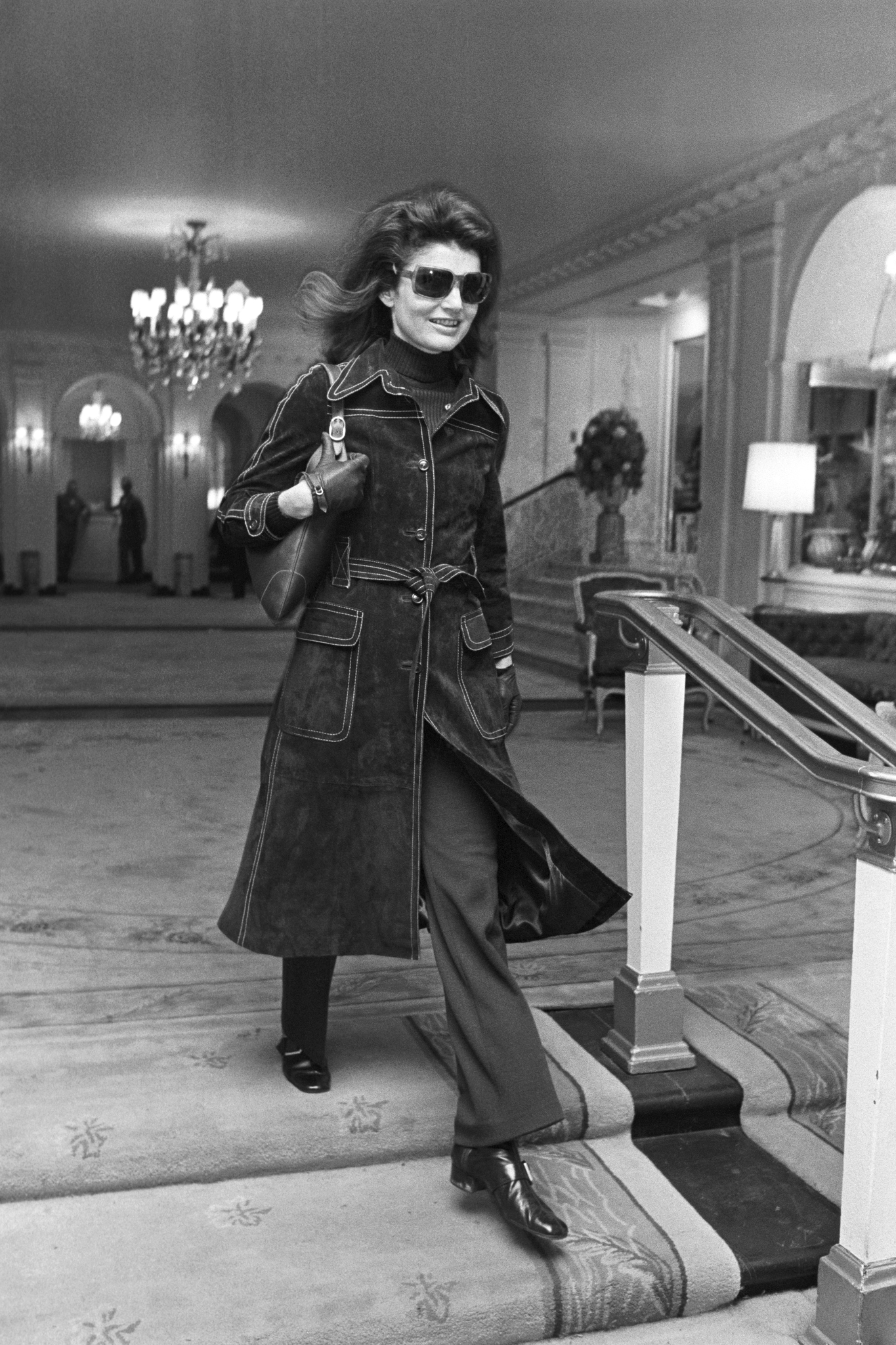 Jacqueline Kennedy Onassis in a lobby, wearing a full-length suede coat and pants in 1971. Sal Traina

Striking a balance is key, according to Garcia, who spoke of the importance of stimulating the economy and young designers, and how that often translates into things that are more accessible and a little less glamorous.

Getting fashion information from the White House can be challenging, despite the fact that first ladies often make very focused decisions about what they wear, who the designer will be, what that designer “represents in the larger scheme of the fashion industry,” Givhan said. “Yet, there’s always a hesitancy to talk too much about the clothing.”

From Steele’s perspective that fits in with how fashion is generally seen in our culture. People have a lot of different opinions ranging from really loving it to being highly critical of it, she said. Four-digit price tags for a dress can put people off, or in the case of Reagan accepting gifts from designers, which some thought politicians and their wives should be above to avoid the perception of a potential bribe, and others saw as support for the fashion industry.

Noting how the modern interest in first ladies’ fashion started with Jackie Kennedy, Givhan said while Kennedy greatly admired French fashion, she couldn’t really wear it in her White House years and she relied on American designer Oleg Cassini. Regarding the idea that first ladies should wear American designers, Steele described that as a universal phenomenon that applies to their French counterparts and others. “Part of the president’s job is to help the economy of the country. In a small way, and maybe in not such a small way because fashion is such an important part of our economy, the first lady is supposed to be supporting American fashion,” Steele said.

Kennedy was largely criticized for supporting French fashion and also for spending so much money on clothes. “She once told Women’s Wear Daily that she couldn’t possibly have spent that much money unless she wore sable underwear,” Steele said.

Conversely, Laura Bush was “absolutely stunned by the amount of money that she was expected to spend creating a wardrobe of designer clothing and [by] this idea that she was not supposed to wear anything more than once and it all had to be custom created,” Givhan said.

As for Melania Trump’s support of European designers and how she was able to get away with not wearing a lot of American designers, Garcia said, “She never asked but I treat everybody the same. They’re customers at the end of the day. If she had asked, I would have complied. It’s my responsibility to comply.” 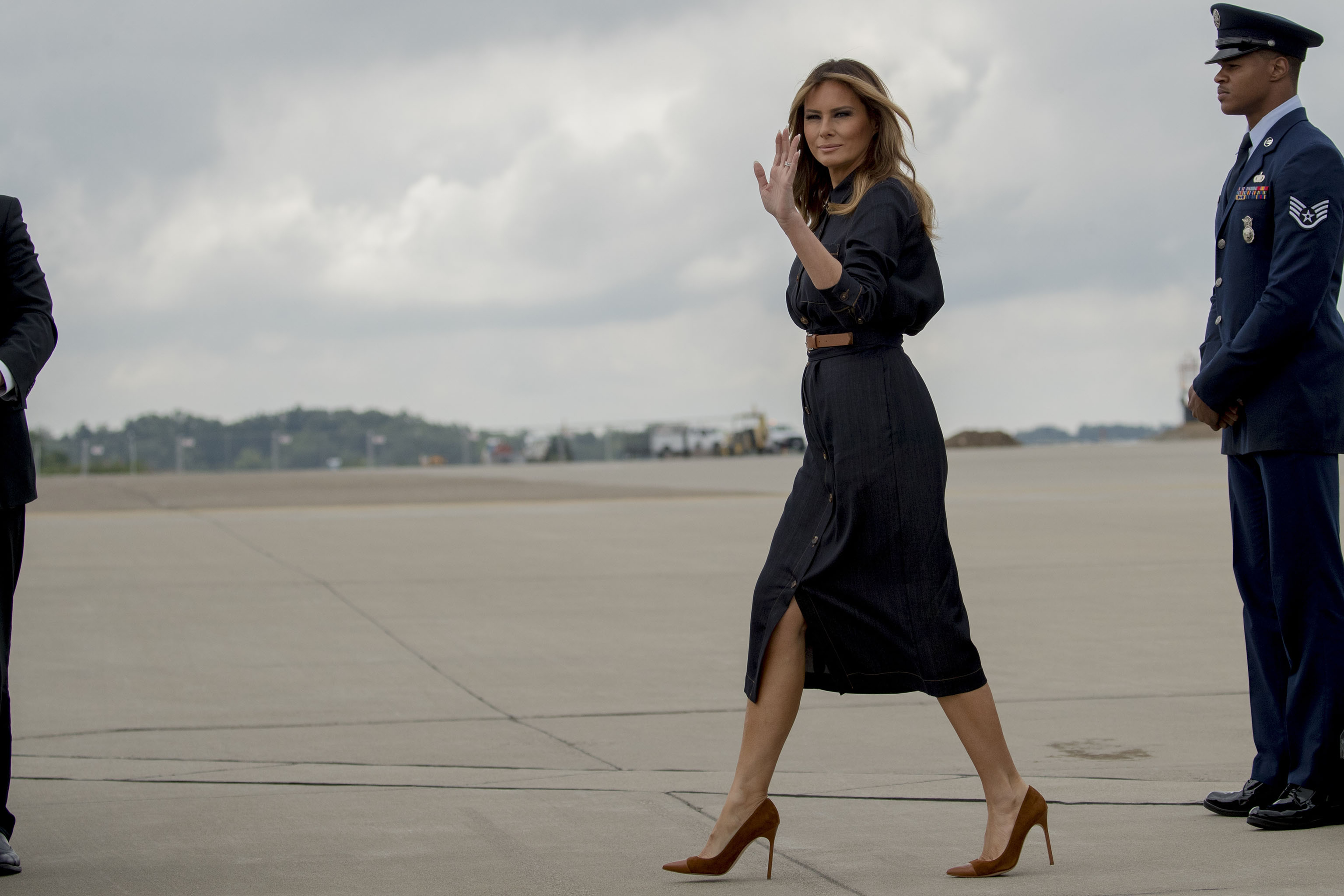 Poplin said, “Maybe because Melania Trump wasn’t born in the United States or maybe because she had roots as a model in the fashion industry, people just felt she wore what she liked and was participating in her own way,” adding that she would have liked to have seen Trump wear fashion in a more interesting way.

Before getting the discussion rolling, Givhan shared a few historical anecdotes such as how Caroline Harrison reinforced her husband Benjamin’s “Buy American” campaign rallying cry by wearing an inauguration gown that required three different domestic resources. Givhan also mentioned how Edith Roosevelt, “an early believer in sustainability,” used pieces from other gowns to construct her inaugural gown. While Rosalynn Carter was criticized for wearing a dress that she had worn before as an inaugural gown, Garcia said, “It’s wonderful if they fall in love with a garment and want to reuse it. That’s something to be celebrated.”

Poplin noted how that fit in to the Carter administration as a whole, which came into a recession. As Democrats from Georgia that didn’t have this patrician upbringing that maybe the Kennedy’s had, the choice was symbolic of their presence in the White House.

Givhan noted how Biden has “very quickly used fashion to make a statement” by wearing a face mask that matched her attire on occasion. Aspiring to have a deeper relationship with Biden, who wore de la Renta on International Women’s Day, Garcia said her camp, as well as Harris’, are very specific. “They have a goal. They tell us what they want to achieve and we work together to create something that fits the role for that moment.” he said.