Home » Lifestyle » ‘First out and last back’: Australia’s decision not to reopen Kyiv embassy questioned

The ongoing closure of Australia’s embassy in Kyiv has been questioned by senior bureaucrats and national security experts who are concerned the nation’s diplomats are getting a reputation for being the first out and last back into countries. 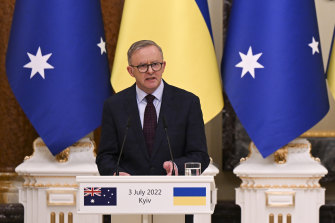 The decision to not reopen Australia’s embassy in Kyiv is starting to bother some officials.Credit:AAP

But a number of current officials and senior national security experts have been left questioning why reopening Australia’s embassy in Kyiv wasn’t a centrepiece announcement of the trip.

Australia has been left without a diplomatic presence on the ground since it shut its embassy in Kyiv on February 13. The embassy is now based temporarily in Poland.

Albanese last week raised expectations of a reopening ahead of his trip when he told journalists in Madrid that it had been examined and he wanted to re-establish an “on-ground presence”.

“Australia is considering that. And that is one of the issues that has been examined over recent days and weeks,” he said.

The PM met with embassy staff when he was in Kyiv, but didn’t announce the reopening of the Australian embassy in Kyiv, as expected.

Albanese said in his press conference with Zelensky he hoped to reopen the mission “as soon as possible”, but was waiting on additional security advice.

Britain, the United States, France and Canada all reopened their much larger missions in April and May. Australia’s embassy is co-located with Canada’s.

Australia was the first of its key allies to close its embassy in Afghanistan, which angered some officials within the Australian Secret Intelligence Service, the overseas spy agency, because it meant they lost their presence on the ground to gather vital intelligence.

While Kyiv is still being hit by a Russian missile every few weeks, many like-minded countries have assessed that it is safe to reopen their embassies since Russia appeared to give up on capturing the city more than two months ago.

A spokesperson for the Department of Foreign Affairs and Trade said the Australian government was “looking closely at when we can move our embassy back to Kyiv”.

“As the Prime Minister has said, Australia would like to have a presence on the ground in Ukraine,” the DFAT spokesperson said.

“There are a number of operational, security and safety issues to take into account and we are considering all of those factors.”

Michael Shoebridge, the head of the defence program at the Australian Strategic Policy Institute, said the balance of risk has shifted in Ukraine’s capital.

“It’s certainly more dangerous than other parts of the world, but it seems secure enough to have an embassy there,” he said. “This is a critical part of solidarity with the Ukrainian people. If we’re right and this conflict is going to be extended, we need a presence that is going to enable us to engage directly with the Ukrainians.”

Shoebridge said Canada and Australia would deploy similar risk assessments and “the Canadians appear to have made the right decision”.

“We don’t want ‘first out and last back’ as our brand. Australians are seen as engaged as international actors and that involves accepting risk.

“If you were in Baghdad during the Iraq surge or in Afghanistan for the decades of that conflict, there was a persuasive insecurity which was much more obvious – and that’s just not the case in Kyiv.”

Hervé Lemahieu, research director at the Lowy Institute, said it was always difficult striking the right balance between protecting diplomatic staff and letting them do their jobs, but “if you look at Australia’s decisions we tend to be more risk-averse than other countries and I think that’s sometimes to our detriment”.

“Australia was one of the first western countries to close its embassy in Kabul, and on the one hand you could say we had a lot of foresight – but on the other hand it would have been wiser to keep it open longer and to process all the humanitarian visas,” he said.

“My understanding was the closure of the Kabul embassy was a real logistical impediment to getting people out.”

According to multiple current government sources, Australia has been reviewing whether to reopen the embassy in Ukraine for more than a month and some officials can’t understand why it can’t be reopened using similar security protocols to Canada.

“There are questions as to why it is taking so long,” one senior government source said, who is not authorised to speak publicly.

Foreign diplomats who spoke on the condition of anonymity also questioned the decision not to reopen.

Journalists for The Sydney Morning Herald and The Age recently spent almost a week in Kyiv and were able to move freely through the city. Nearly all major international media outlets have journalists permanently based in Kyiv and regularly report on visits by foreign leaders.

Australia's security agencies took a conservative approach to Albanese's visit when compared to trips made by other leaders in recent weeks.

While several international outlets reported Albanese’s visit in real time, the federal government imposed a 36-hour media blackout on Australian reporters travelling with the PM to Kyiv, who were told they couldn’t take any electronic devices into the country.

They were also told that unlike previous prime ministerial visits to places such as Afghanistan, a US-led coalition force is not in place to provide overarching security.