Home » Lifestyle » Why Is Fish Sex So Hot Right Now? An Investigation

Time for the easiest game of “if you loved this movie, read this book” ever: If you loved “The Shape of Water,” a movie about fish sex, you should definitely read The Pisces by Melissa Broder, a book about fish sex. The cover literally shows a woman in an amorous clinch with a fish; the novel actually tells the story of a woman who has a torrid love affair with a merman.

Now, one fish-fucking opus in the space of a year might be a blip. Two seems very much like a trend. (We might even call it three, considering last summer’s Made for Love by Alissa Nutting, in which a male romance scammer, after a fantastical sea-bathing accident, becomes exclusively attracted to dolphins. Though, to be clear, dolphins are not fish.)

So what’s going on here? One can never discount the ongoing power of “The Little Mermaid” in the American cultural imagination, sure. Who among us could claim to be immune to the charms of Ariel and/or her buff dad, King Triton? Plus, the past five years have seen the release of not one, but two documentaries about humans who had sexual relationships with dolphins back in the ’60s and ’70s, perhaps reintroducing the idea of aquatic sex with nonhumans into artists’ minds.

But The Pisces and Guillermo del Toro’s Oscar-winning “The Shape of Water” also seem to have arrived during an inflection point for heterosexual relations, as some straight women have thrown their hands up in despair at the prospect of dealing with straight men. These men, who grope us and talk down to us and consistently fail to clean the bathroom ― we’re supposed to make lives with them? Let them touch us?

Women woke up one day to find that their husbands voted for Donald Trump and their sons have been shitposting on incel boards. Even before we heard the claims about Harvey Weinstein’s history of sexual harassment and assault and the ensuing avalanche of other horrifying Me Too allegations, we heard about our president grabbing women “by the pussy,” Bill Cosby feeding women roofies, and R. Kelly allegedly sexually exploiting young girls. So many straight men, we have been forced to accept, are bad to and for us. Why would we take the enormous risk of loving one of them?

And yet, straight women do have desires. Cutting men out of our lives isn’t a simple proposition. As satisfying as the concept of going “Lysistrata” until men get their house in order might be, that strategy also requires straight women to deny their sexual urges. The handsome prince (or film star, or cowboy, or doctor) of our imagination has been exposed as a dangerous fraud, but we still need some form of romantic hope and sexual release. One seductive yet impossible fantasy might be the romantic attention of a man who lacks the exhausting baggage of male entitlement.

To find such a fantastical being, women ― in fiction, at least ― have turned to the sea. 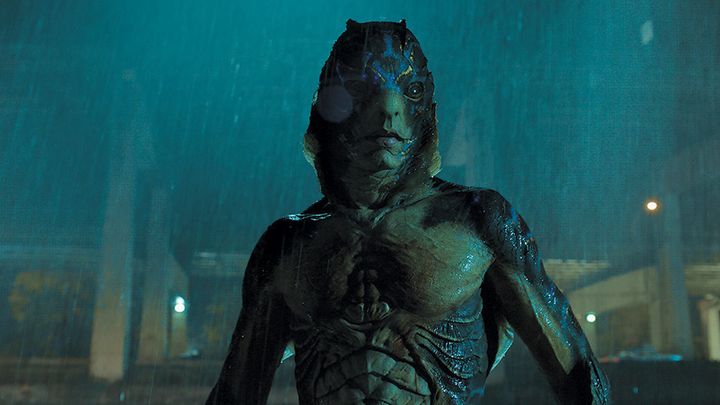 Lucy, the protagonist of The Pisces, is newly single, running out of time to finish her dissertation, and spiraling out of control. (That Lucy’s dissertation focuses on Sappho, whose poetry explores eroticism of a non-heteronormative, female-centered bent, is in itself telling.) Not long after breaking up with her longtime boyfriend, she becomes obsessed with getting him back; unfortunately, he’s quickly gotten another girlfriend. Her ensuing freakout features Ambien, doughnuts and an unprovoked physical assault on her ex.

So she takes two steps to address the situation: She heads to Venice Beach for the summer to dog-sit for her sister and brother-in-law, and she starts attending group therapy for love and sex addiction. (The latter step is court-mandated, due to the aforementioned violence.)

Despite the therapy sessions, Lucy can’t stop searching for male attention to restore her sense of desirability and worth. Before each encounter with a prospect, she feels buoyant and eager, but again and again, she’s left sexually and emotionally unfulfilled, in part because the men don’t much care whether she’s enjoying herself.

One man she meets on an app ― a hot younger dude in an open relationship ― convinces her to have sex with him in the lobby bathroom of an upscale hotel. It’s quick and mediocre. She doesn’t come. Afterward, he leaves without telling her, stranding her alone at the hotel bar. Lucy thought the encounter would be something different, that it would make her feel deliriously sexy and desired.  She tries not to let herself feel sad about how transparently he was using her to fulfill his fantasy while her own went entirely ignored. What she wants is for even this one-time fling to care desperately about making her come, for his world to narrow around her pleasure, even for just a few minutes.

“I knew that what I wanted was something that couldn’t exist,” she thinks. “But that didn’t mean it wasn’t something I wanted.”

When she begins to fall for Theo, a tautly handsome swimmer she keeps seeing in the ocean near her sister’s beachside home, it seems like she may have found the something that couldn’t exist. Theo looks decades younger than her, but he is fascinated by her. He seeks her out, pulling up by the rocks at the edge of the beach to talk with her night after night. He wants to kiss her, then give her oral sex for hours under the stars. Soon, she learns that there’s a reason he initially stayed submerged from the waist down during their encounters: He’s what we might call a merman, and instead of legs he has a scaly tail.

Like the creature in “The Shape of Water,” Theo seems to be an exception to the rule of toxic straight maleness. Where other men hurt, threaten and betray, these unhuman beings pleasure, console and conspire with women.

The men in “The Shape of Water” are particularly extreme in their untrustworthiness ― save for Giles, Elisa’s (Sally Hawkins) friend who is gay. The primary antagonist, Colonel Strickland (Michael Shannon), is grotesque in his maleness. He’s sexually threatening toward Elisa, coming on to her while she wipes up a spill from his office floor. We even see him having business-like, unromantic intercourse with his blonde, manicured wife. When she protests that he’s bleeding on her from a wound on his hand, he tells her to be quiet.

For Lucy, men disappoint less dramatically. Her ex toys with her emotions; the men she dates are sexually selfish and reckless with her health. But Theo is different, both because he has a scaly tail instead of legs, and because he proclaims to be devoted to her and her pleasure.

Though there’s an insistent attention on the penis and penetrative, heterosexual intercourse in both love stories ― Lucy’s merman turns out to be human down through the pelvis, including an “ample, beautiful cock, uncircumcised, white and pink, with two round pink balls”; Elisa mimes, to her friend Zelda (Octavia Spencer), a penile unfurling that, she implies, makes penetration possible ― there’s also an unmistakable queerness to these mythical, human-like creatures. They transgress the boundaries of what society traditionally demands from a male body. Lucy even notes a feminine quality to Theo, a scent to his tail and semen that reminds her of pussy. “I felt as though … he was female for a moment,” she thinks after he comes in her mouth.

This story is a seductive one, especially to straight women who yearn to get outside of the oppressive structures and expectations of their dating realm. What if we found men who were different? Who were in touch with their emotions, called themselves “feminist allies” for reasons other than wanting to center themselves in the movement, enjoyed giving us orgasms, texted right after the first date?

“Never trust a man,” says Zelda, after hearing about Elisa’s tryst with the creature. “Even if he looks flat down there.” But “The Shape of Water,” ultimately, leans into the dreamy romance of escaping the predations of the patriarchy, of floating into a watery paradise with a man who won’t abuse or betray. It’s an eerie, adult rendition of Disney’s “The Little Mermaid,” only in reverse.

For Broder, the story looks a bit more like the unvarnished, old-school fairy tales, casting an unromantic warning light over the unjust, dangerous world we navigate. It’s not a simple parable about finding joy through virtuousness and an open heart. Lucy’s disillusionment with her human options and her desire for the perfect man may be understandable, but it’s also blinding. For one, it blinds her to her own insufficiency. These men don’t treat her well, but she’s also a woman who knocked on her ex’s door and then socked him in the face.

It blinds her to Theo’s dark edges, too. She’s desperate to believe that she’s found a loophole in the rule of male dangerousness, a man she can kiss and fuck and love without any of the risk. But just because Theo isn’t human, she must eventually recognize, it doesn’t necessarily follow that he’s virtuous.

In the end, Lucy herself isn’t free of the baggage of the broken, patriarchal world she lives in ― no matter where she searches for a perfect love, she’ll bring her own flawed beliefs and warped longings with her. It’s fitting: All those disappointed women chose to marry men who turned out to be Trump voters, and over half of white women voted for him themselves. Suffering a certain measure of oppression and exclusion does not inoculate one against perpetuating it.

Where “The Shape of Water” offers an anthem for outsiders, the virtuous heroes seeking salvation from a world of marauding straight men, The Pisces offers something equally necessary, and more interesting: an exploration of how deeply implicated we all are in this corrupted world, and how far we’d have to swim to escape it.