Last weekend a rogue image popped up on the silos that sit by the trainline in Brunswick’s northen fringe: a colourful animation of two female figures connected by a pulsing rainbow tube.

The huge projection was there for a brief time, as trains hooted past and locals gazed up in surprise. Then it was gone. 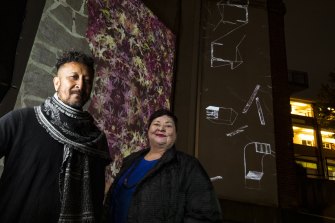 Jacob Tolo and Edwina Bartlem are curators of A Strange Space, a projection and performance program at Collingwood Yards.Credit:Chris Hopkins

But expect more like it. The “night art” scene, powered by light-throwing tech in the hands of a growing number of artists, has never been bigger.

Projection art is so hot right now. The upcoming RISING festival will put massive images on the sides of iconic buildings around Chinatown in the CBD, the Gertrude Street Projection Festival is prepping for July, this weekend sees a projection mini-festival at Collingwood Yards, and Joan Ross’ Collector’s Paradise, a subversive animation that exploded away the facade of Canberra’s National Gallery of Australia, was a popular hit in February and March.

But it’s not just an institutional story.

“What makes projection interesting is that it’s kind of ‘going rogue’,” says artist Andrea Draper, aka I Dream in RGB, who created the silo projection.

Draper only recently began experimenting in this medium, and already loves it. A video taken by a passer-by was put up on a local Facebook group to rapturous response.

“That feedback has definitely spurred me on to do more,” she says. “I like to connect with people that wouldn’t usually go into an art gallery, who might find them a bit threatening. I want to explore spaces that are non-conventional, and connect on a personal level. And I feel the community just connects with projection art. It’s something a bit different, not official, not highbrow.”

Some urban art can alienate those who feel it’s damaging public spaces, but projection art is ephemeral, says Draper.

“It’s there just for a moment and then it disappears. A lot of people will miss it but if you see it you’re kind of special. And [in Melbourne] we love that. It gives you a kind of edge, if you saw it, a kind of coolness.”

This week the Centre for Projection Art and Midsumma Festival is staging A Strange Space at Collingwood Yards, a program of site-responsive projection art and performance.

Co-curator Edwina Bartlem is also vice-president of the Centre, which grew out of the Gertrude Street Projection Festival.

“It really creates a sense of awe in people which makes them very appealing,” she says.

And the pandemic may have helped in creating a “moment” for projection art, with a big focus on work that can be staged outdoors, where it is less likely to be shut down should COVID-19 hit the city again. 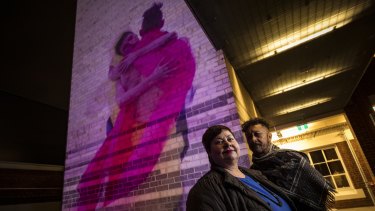 Bartlem says screen-based media has been growing in popularity for the last 20 years. Credit:Chris Hopkins

“People can actually gather outside and look at it and have a quality experience with an artwork outside, without having to be crammed into a gallery,” Bartlem says. “I’ve no problem with galleries but just from a practical point of view that’s one of the reasons projection might be popular or having a resurgence at the moment.

“But certainly screen-based media has been growing in popularity as an artform probably for 20 years.”

Her co-curator Jacob Tolo agrees. “For me personally it’s about scale and also it’s about impermanence,” he says. “You’ve got this fleeing moment of light, then it disappears the next day and I think that’s so beautiful. And also a projection can be on any surface; any surface can become a target for an artwork. I love that idea.”

He’s seen artists with battery-powered, handheld projectors throwing art around them as they walk along.

A Strange Space is on nightly, now until Sunday.