Home » Lifestyle » Full Moon effects: Five unusual signs to watch for ahead of the Hunter’s Moon 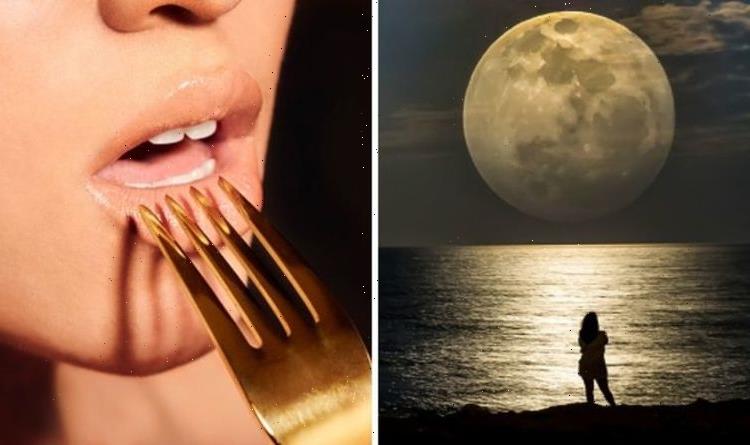 The Hunter’s Moon is a Full Moon in Aries occurring at 3.57pm on Wednesday, October 20. Astrologers and Moon worshippers predict the emotional side effects of lunar events, but did you know the Moon can affect your physical condition? Express.co.uk chatted to The Organic Pharmacy to find out the five unusual signs to watch out for ahead of the Full Hunter’s Moon this week.

The Moon is something lots of people don’t pay attention to, but mystics argue that the Moon has a huge impact on our emotions and physical health.

The argument for this is hard to deny: the Moon controls the tides and 60 percent of the human adult body is water… So why would the Moon stop at the sea?

Experts at The Organic Pharmacy pointed out: “Many people believe that their health and behaviour is controlled by lunar phases, and have noticed certain health symptoms flaring up during the time of a Full Moon.

“Most commonly, people notice symptoms up to three days before and three days after a full moon, as well as on the night of the full moon itself.”

Here are the five most common but unusual symptoms to experience in the lead up to a Full Moon.

Our bodies have adapted a natural clock in line with the Sun and Moon.

This is called your circadian rhythm, and it uses the light from the sun to regulate your internal body clock which, in turn, keeps the rest of your body in check.

On a Full Moon such as the Hunter’s Moon, the sky is brightened every so slightly by around 0.05–0.1 lux and a supermoon can brighten it even more (by about 0.32 lux), according to a report published in Astronomy & Geophysics).

Apparently, this extra light could throw your circadian rhythm out of sync.

The experts said: “This means your body could find it harder to fall asleep at the right time, and a study published in the journal Current Biology backs this up.

“Participants of the study found it harder to fall asleep, spent less time in a deep sleep, and slept for around 20 minutes less during the period of a Full Moon.”

A study conducted in 2021 found a link between the lunar cycle and sleep in indigenous Toba/Qom communities in Argentina.

The team at the Organic Pharmacy said: “They discovered that, on nights with a Full Moon, the Toba/Qom participants showed later sleep times and shorter sleep duration.

“This is as a result of the extra moonlight available on nights with a Full Moon, which allowed them to continue their daily activities for longer.”

The lack of sleep leading up to a Full Moon wreaks havoc on your immune system and could encourage gut parasites to flourish in your body.

The experts noted: “Getting enough sleep is essential for your body to be able to regulate hormones such as melatonin.

“While this hormone is commonly referred to as the sleep hormone, it also plays a part in regulating your immune system so a lack of sleep could lead to reduced immune response and increased inflammation.

“If you’ve noticed bloating, allergy flare-ups, or flu-like symptoms during a Full Moon, it could be due to a lack of sleep and compromised immune system.”

On top of that, some research suggests that you could have gut parasites that your body is finding difficult to fight off around a Full Moon.

The Organic Pharmacy’s experts said: “While it’s perfectly healthy to have certain types of bacteria in your gut, you could end up accidentally ingesting not-so-good bacteria or parasites on unwashed fruits and vegetables, or raw fish and meat.

“This can also cause symptoms such as bloating, fatigue, rashes, nausea, diarrhoea, and flu-like symptoms.”

If you’ve noticed these symptoms during a Full Moon, it’s best to consult your doctor to find the cause.

Full Moon migraines are the real deal, with sufferers claiming the moon is to blame for their debilitating headaches.

Some people tend to notice their headaches getting worse or more frequent around the time of a Full Moon, but the Full Moon isn’t the direct cause.

It is more likely that your worsened migraines are down to disrupted sleep, thanks to the extra light emitted from a Full Moon.

If you’ve been tossing and turning all night, you may also suffer from tension headaches the next day.

If you’re feeling extra hungry at the moment, you’re not alone!

Excessive hunger may not be directly linked to lunar phases, but, once again, could be thanks to a lack of sleep.

The team at The Organic Pharmacy said: “Getting regular amounts of rest is vital to keep our bodies in check, including our hormones, according to a report published in the International Journal of Endocrinology.

“When we get too little sleep, our hormone levels can be thrown out of balance, particularly those linked to metabolism like leptin and ghrelin, which can lead to increased appetite.”

“And, considering the extra light from the Full Moon can affect your sleep, it could be possible that a lack of sleep during the full moon can lead to overeating the next day.”

A Full Moon could also have a direct impact on your kidneys, according to a study published in the Urology Journal.

Scientists found a correlation between kidney stone pain and a Full Moon, suggesting the lunar cycle could have a deeper impact on your body.

Although the cause of this link is unknown, some scientists suggest that this correlation could be due to fluid balances.

The team at The Organic Pharmacy explained: “It could be possible that our body’s fluid levels can also be controlled by the lunar cycle.”