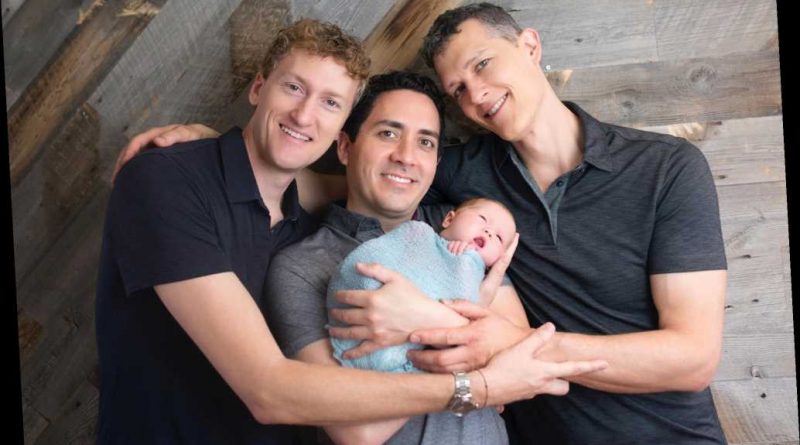 Couple tries polygamy before marriage — what could go wrong?

Three isn’t a crowd for these dads.

A gay, polyamorous California throuple made history in 2017 when they became the first family in the state to list three parents on a birth certificate.

Their reproductive journey and legal battle to become fathers to Piper, now 3, is detailed in “Three Dads and a Baby” (out March 9, Cleis Press), written by one of her dads, Dr. Ian Jenkins.

Jenkins and his partners, Jeremy Hodges and Dr. Alan Mayfield, don’t see their family — which now also includes their son, Parker, 1 — as unusual.

“The fact that Piper has three parents is just not a big deal. I have three parents myself — my mother, father and stepmother — and no one thinks anything of it,” Jenkins writes in the book. “Some people seem to think it’s about a ton of sex or something, or we’re unstable and must do crazy things. [But] it’s really remarkably ordinary and domestic in our house and definitely not ‘Tiger King,’” referring to Joe Exotic’s wild gay throuple featured in the buzzy Netflix docuseries.

Jenkins met Mayfield, a psychiatrist, while they were completing their medical residencies in Boston. The two were together for eight years when Hodges, who works at a zoo hospital, came into the picture.

Although their relationship with Hodges began as a friendship, things quickly turned romantic. After five years of throuple-dom, the trio started seriously discussing parenthood when friends offered to donate their leftover embryos to them.

Over the next year, the family would spend more than $120,000 on legal fees, contracts, implantations and tests. “Gay couples don’t stumble into parenthood by accident. It’s always a deliberate act, and a complicated one,” Jenkins writes.

First, they had to find a surrogate. Luckily, their friend Delilah offered to carry their child. Then came the lawyers. The embryos needed to be adopted so that each man would have equal parental rights. It was a rare case: Third parents are usually added on to birth certificates after the fact, not at the time of the birth.

It didn’t help that one of the embryos wasn’t viable, and another didn’t properly implant. The process had to start all over. This time, a friend named Meghan came to the rescue and donated her eggs to the trio.

“We had to have contracts between each man and each woman. Then, when another cycle got planned, we realized the contracts had to be redone. Of course, redoing them means $500 an hour in fees,” Jenkins writes of the ordeal. “And the requirement is to pay four lawyers [one to represent each father, plus one for the surrogate] to craft a parenting agreement, which no straight couple has probably ever been asked to sign.”

The trio won the right to their “poly birth certificate” just before Piper was born. “Had we not … one of us three parents would be a legal nobody to the kids,” Jenkins writes. “No right to visitation if we split up. No ability to consent for medical care. No say in decisions. No legal responsibilities. No automatic inheritance. This would have been really risky for the family.”

‘I’m Papa, Alan is Dada and Jeremy is Daddy.’

There were medical setbacks, too. At one point, they left their longtime IVF doctor over a disagreement about medical risks. The dads-to-be didn’t think anything of it, until they learned another gay couple had been turned away from the same doctor because their case seemed “too complicated,” which the dads took as a sign that she didn’t like working with same-sex partners.

Too often, they felt like outsiders, even when providing their sperm samples: Jenkins says the visual aids on offer were geared toward heterosexual men.

But the stress and pain of the fight were worth it.

Now, Piper and Parker have no trouble understanding their parents’ relationship. “I’m Papa, Alan is Dada and Jeremy is Daddy,” says Jenkins. “We all bring something different. Alan is the best at reading books, with an accent and backstory for every character.” Jeremy is the creative dad, who makes bath bombs and special lunches for the kids. Ian is often the family cook, and the resident fort-maker.

Now in preschool, Piper sees her daddies as a source of pride.

She told a classmate, “You have two parents. I have three parents.”