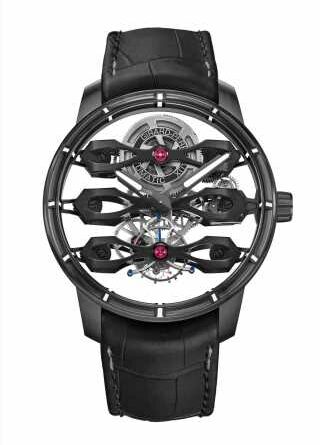 “It’s completely transparent, the bridges are practically suspended, fixed in a way that looks practically invisible,” noted Patrick Pruniaux, chief executive officer of Girard-Perregaux. The idea was to work the three bridges into a contemporary design, explained the executive, describing the collaboration with the famed carmaker.

“The two brands have so much in common, I think there will be a nice love story between the two,” he added.

Girard-Perregaux kicked off its 230th anniversary year with the announcement in February of its partnership with Aston Martin. It is the official timekeeper of the British carmaker, which returned to Formula 1 racing as a works team this year. Its Cognizant Formula 1 team cars are stamped with the watchmaker’s name.

The executive described both labels as carrying a certain “elegance and authenticity,” both producing at low volumes, and high quality. “There is an iconic side to the brand [Aston Martin], but that doesn’t stop them from being creative — this is a trait that we both have in common,” he said.

The watchmaker recently parked an Aston Martin DBX SUV at its La Chaux-de-Fonds headquarters. The model features in a film on the watchmaker’s website, showing a group of youths streaming out of the vehicle at night and trotting up to a rooftop to light up the carmaker’s logo — meant to project a lively, youthful approach.

Pruniaux said it could be tempting to take a conservative approach when drawing on the historic tourbillon with three bridges design, which dates back to 1867. “In fact, we played around with them to make a very contemporary piece,” he said.

“We had to consider lines and proportion on a far smaller measure than we are used to in the realm of automotive design,” Marek Reichman, executive vice president and chief creative officer of Aston Martin, said in a statement.

The timepiece will be produced in a limited series of 18 pieces with a price tag in the range of 146,000 Swiss francs, which is equivalent to around $155,000.

Asked about how the pandemic context might have affected how labels work in collaboration with one another, Pruniaux stressed the importance of ensuring partnerships are meaningful.

“I think you have no choice but to be sincere. I believe there is absolutely no point in doing something for pure marketing reasons,” he said, asserting that people will notice if there’s not a real moment of joint creativity.
“This is true for all partnerships — you have to have some coherence.”

Executives are drawing up plans for events to bring together their communities, which Pruniaux predicted would have a halo effect. In the case of Aston Martin and Girard-Perregaux, the two labels have strong heritage, deep expertise and are associated with a “high level of passion,” he suggested.

While they are both high-end labels in terms of price and quality, there is a certain inclusiveness and warmth behind them, he added. “It’s never your first car or first watch but at the same time, there’s a welcoming side to the two brands,” he said.

Under Pruniaux’s direction, Girard-Perregaux has refocused the product assortment, cut back on the number of novelties launched each year, upgraded its network of distribution channels and sharpened brand messages. “The brand is developing well,” said Pruniaux. “We hold a long-term view.”