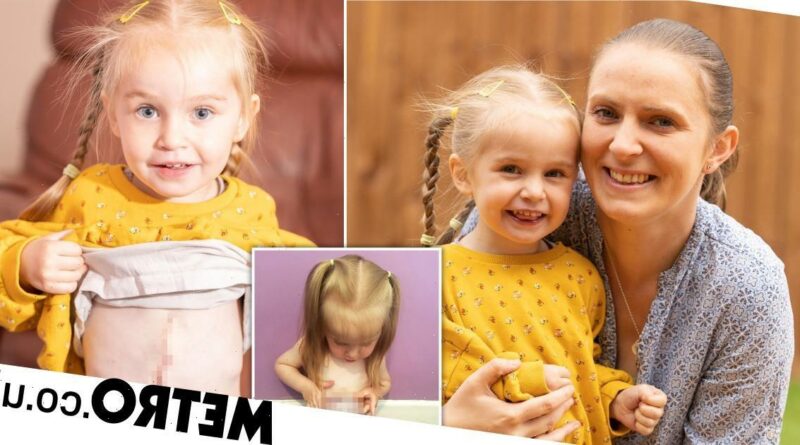 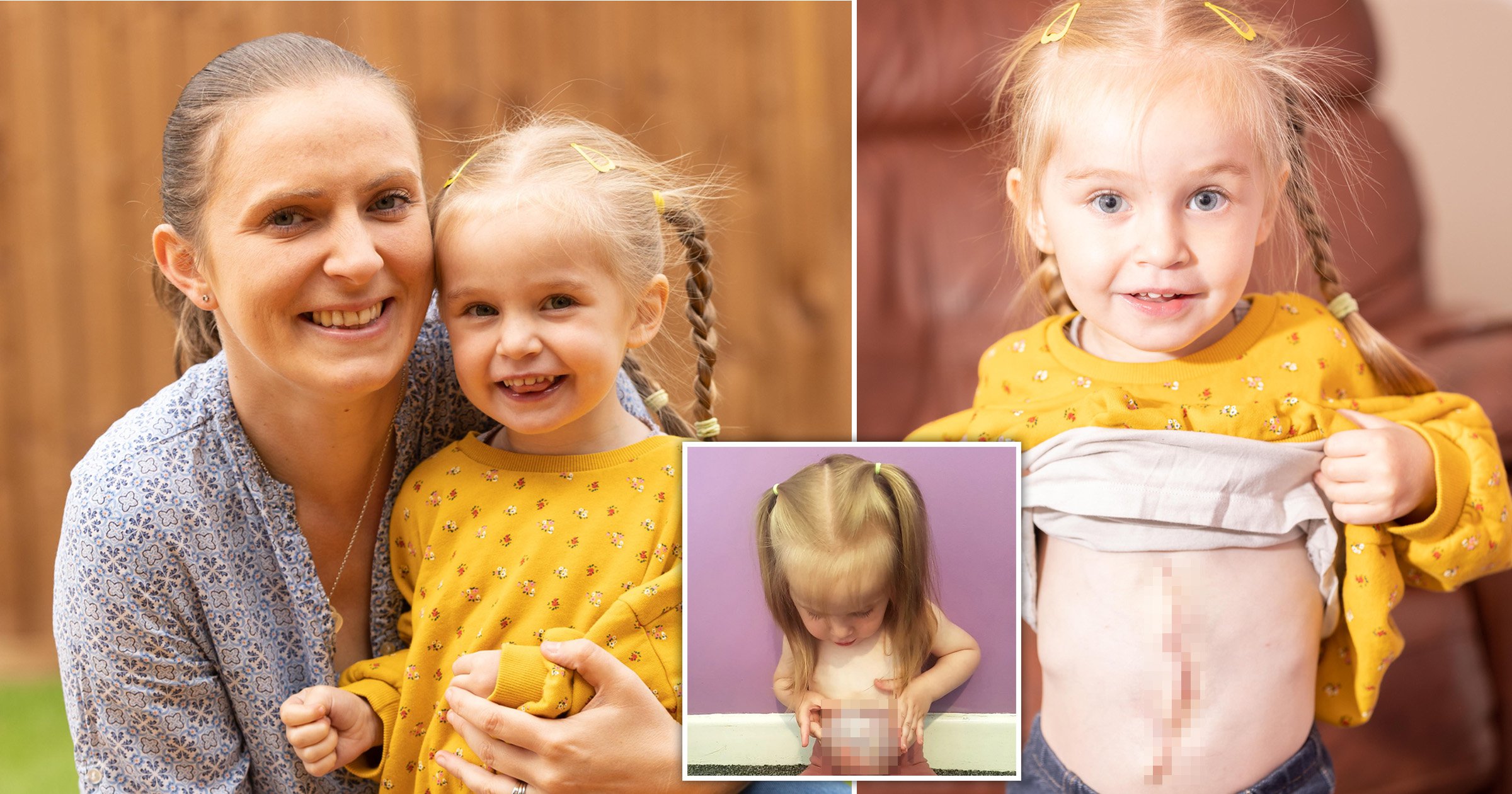 A toddler is now able to live a normal life, thanks to a life changing operation.

Three-year-old Laurel Phizacklea, born ‘inside out’, was diagnosed with a major exomphalos three months before she was born in Cambridge.

This condition occurs when the abdomen muscles doesn’t close properly, which means some of the abdominal organs stay outside – Laurel’s was classed as major as it included her stomach, liver and bowel.

Her intestines, stomach, liver and bowel were inside the umbilical cord but outside the abdomen.

Mum Kelly and husband Sean were offered a termination, then again three weeks before, but after ruling that out, Laurel was put onto a ventilator following her birth and spent 13 weeks in the neonatal intensive care unit.

‘There was a stage when we first came home from hospital that you wonder if you will ever be able to live a more normal life,’ said Kelly.

Now after several intricate operations, Laurel is now living a normal life and is very active against the odds.

‘I think we forgot about how she would feel because that’s all she’s known for three years, and to suddenly go to sleep, wake up and it’s gone,’ said Kelly.

‘Now, she’s getting to the stage where she likes to show off her new tummy.’

Naturally, her homecoming was made special by the family clubbing together.

Kelly’s brother Lee Wiseman worked with a team to create a back garden for the toddler.

He said: ‘100% the most satisfying job I’ve done. There’s rarely been a homecoming like it.’

After multiple echocardiograms, including an MRI scan on her spine to check for paralysis, Laurel was then diagnosed with congenital scoliosis, a spinal deformity and a hole in her heart was found.

While still in the womb, there were fortnightly scans to check on her progress.

The parents were were told their unborn baby would not survive birth as the exomphalos had expanded, but the couple still had hope.

While it’s common for children with an exomphalos to have their organs reinserted at birth, Laurel has to wait till the age of three due to the abnormally large size of hers.

This was so there was enough space for her diaphragm while her frame is not too small.

‘She came home with her organs on the outside and they had to be dressed at all times,’ said Kelly.

‘This past year, she’s had a compression belt to try and push the bump in.’

Despite being told she’d need to spend six to eight weeks in hospital, she was home within just one.

‘All her organs were completely in the wrong place inside, so the surgeon had to reset her, take everything out, put it in the right place and sew her up,’ Kelly said.

‘To be home so quickly, you sometimes worry it’s too good to be true.

‘We were having to remind her when we got home that she’s had a major operation and needs to calm down.

Now the family will have to monitor her to see if she’ll need more surgery.

‘The one thing we didn’t think about which we should have thought of more was how it would impact her psychologically.

‘When Laurel first came back home, she was scared to see her new-look stomach and because of her fear, was scared to change clothes.

‘But she has been able to adapt, and now there is a feeling of relief amongst friends and family.

‘We’ve gone from issues with her breathing when she could have been paralysed or undergone multiple spinal surgeries, to doing what every normal parent has to worry about,’ said Kelly.

‘We haven’t got those additional worries as well, so it’s such a big relief.’

Laurel is now preparing to attend pre-school for the first time this September before making the step up to primary school next year.

‘I think that’s going to be a big milestone for her,’ Kelly said.

‘I feel a lot freer and for her, I want her to now be able to do more things independently, like playing with friends.

‘They always say how the first two years of their life affects how they develop, and it does make you worry as a parent because she’s spent a lot of time in hospital.’

Although, the mum think this time hasn’t effected her bright character.

Physically she’s now eating better too and her spinal condition looks to have improved.

‘She can now do things more independently and it feels like we haven’t got that hanging over our heads; we can get on and live life,’ she added.

Laurel still has physio has been encouraged to climb and be active to support her spine – something she loves doing.

Since falling pregnant, Kelly has been running a Facebook page supporting families who have gone through similar experiences.

All over the world, people have connected with her.

Her piece of advise is: ‘I’d always say to try and find out as much as you can about the condition.

‘If you feel differently to the healthcare professionals, make sure you speak up as you’re there to speak up for yourself and your baby.

‘Some medical staff may not have heard of this condition, so sometimes, you’re the one who has to explain to them what it is.’

Kelly knows she is one of the lucky ones compared to other first-time mothers and families.

‘We’re so fortunate because there are lots of other children who have far more complex needs than Laurel.

‘We’ve still been able to go out and visit places, where some children have to spend most of their life in hospital, so we’ve always been very lucky.

‘We’ve been building up to this since the 12-week scan in 2017 and now it’s all done; that’s the chapter of our life finished,’ the mum said.