Whether at the beach, the park or lazing in bed, these are the books you’ll want to keep returning to over the break. 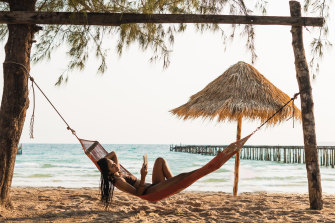 What’s a summer break without a good book? Credit:Stocksy

The Glass Hotel
by Emily St. John Mandel (Picador)
A story of financial corruption and a woman on the brink, this haunting novel follows Vincent – a beautiful bartender at the Hotel Caiette on Vancouver Island – from traumatic childhood to trophy wife as she navigates a world motivated by greed and questionable moral values.

Isabelle in the Afternoon
by Douglas Kennedy (Arrow)
This sweeping love story begins in
the 1970s, when Sam, an American student in Paris, meets Isabelle, a beautiful and enigmatic married woman, igniting a passionate affair that spans decades.

Such a Fun Age
by Kiley Reid (Bloomsbury Circus)
A thought-provoking and entertaining read about the complicated relationship between white wealthy lifestyle guru Alix and her toddler’s black babysitter, Emira, who is accused of kidnapping her young charge on a trip to the shops.

The Vanishing Half
by Brit Bennett (Dialogue Books)
This beautifully written novel explores race, identity and how the past shapes us, through the captivating story of light-skinned African-American twins Stella and Desiree Vignes. The sisters leave their small hometown and forge two very different paths – Stella starting a new life as a “white” woman.

My Dark Vanessa
by Kate Elizabeth Russell (Fourth Estate)
In this disturbing yet compelling novel, Vanessa, 32, is forced to come to terms with a relationship that began when she was 15 with her much older English teacher, after he is accused of sexually abusing another former student.

Life After Truth
by Ceridwen Dovey (Viking)
Fifteen years after graduating from Harvard, a group of friends reunite at college for the weekend. Old tiffs and tensions resurface, but things get really interesting when one of their classmates turns up dead. A fabulous read about friendship and the search for happiness.

Riptides
by Kirsten Alexander (Bantam)
Set in 1970s Queensland, this captivating story, about how one fateful decision can shape the future, follows siblings Abby and Charlie, who cause a fatal car accident on the way to visit their father and flee the scene.

Sheerwater
by Leah Swann (Fourth Estate)
Set over three days, this is a gripping story about the power of a mother’s love. It follows Ava and her young sons, who are on their way to start afresh in a new town when they witness an accident. Ava stops to help, but when she returns to the car her boys are gone.

The Dictionary of Lost Words
by Pip Williams (Affirm Press)
This enchanting book about a young girl growing up in Edwardian England centres around Esme, whose father is compiling the Oxford English Dictionary. Endlessly curious and longing for purpose, Esme begins to assemble a dictionary of her own, collecting words and wisdom as she goes.

Song of the Crocodile
by Nardi Simpson (Hachette)
Lyrical and evocative, Yuwaalaraay woman Nardi Simpson’s debut novel tells the story of the Billymil family. For three generations they have lived in the small town of Darnmoor, watched over by ancestral spirits, as the world progresses and tensions in the town grow.

The Bluffs
by Kyle Perry (Michael Joseph)
Set in Tasmania’s Great Western Tiers, this atmospheric novel follows Detective Con Badenhorst as he investigates the mysterious disappearance of four schoolgirls – one a YouTube sensation and another the local drug dealer’s daughter – in the same mountainous, and supposedly haunted, terrain that a group went missing from 30 years before.

Seven Lies
by Elizabeth Kay (Sphere)
This is the story of Jane and Marnie, inseparable since they were 11 years old – until friendship turns to obsession, grief to jealousy and Marnie’s husband ends up dead. Jane is left to untangle
a chilling web of deceit that will have you guessing till the very end.

One by One
by Ruth Ware (Harvill Secker)
Set in the French Alps, this Agatha Christie-inspired mystery follows a group of employees on a company retreat. After the boss vanishes on the ski slopes and an avalanche hits the lodge, slowly but surely each member of the group starts to drop off.

The Guest List
by Lucy Foley (HarperCollins)
Set on a remote Irish island, this brilliant thriller takes place at the extravagant wedding of power couple Jules and Will. Every detail has been considered; however, the bride’s
best-laid plans start to unravel when one of the guests is brutally murdered.

The Other Passenger
by Louise Candlish (Simon & Schuster)
Full of shocking twists and turns, this clever thriller follows Jamie, who is dragged into a murder investigation when Kit, his fellow commuter, fails to turn up for the ferry one morning. Jamie is innocent but he must find Kit or the killer to prove it.

The Happiest Man on Earth
by Eddie Jaku (Macmillan)
We could all learn a thing or two from Eddie Jaku. The German-born Sydneysider survived Auschwitz but lost most of his family and friends during World War II. Refusing to bow to hate and suffering, he chose love and kindness instead, honouring the dead by living his best life.

Look Again
by David Bailey (Macmillan)
The famous fashion photographer’s memoir is full of the salacious stories you would expect from a man who worked at Vogue, dated Jean Shrimpton, had an affair with Anjelica Huston (when she was with Jack Nicholson) and married Catherine Deneuve. A fun and fabulous read.

Untamed
by Glennon Doyle (Vermilion)
In this part memoir, part self-help book, Doyle shares her experience of breaking free from society’s expectations and claiming her “true untamed self” – in her case, leaving a marriage to be with the woman she loves – so as to encourage others to be brave enough to do the same.

Son of the Brush
by Tim Olsen (Allen & Unwin)
Olsen’s memoir about the joys and challenges of growing up in the shadow of his famous artist father, John, is a fascinating read. In addition to all the juicy art world anecdotes, it’s a candid look at his journey from “free range” child to respected art dealer.

Cook, Eat, Repeat
by Nigella Lawson (Chatto & Windus)
Fans of the domestic goddess will delight in reading her latest book from cover to cover. Comforting recipes are intertwined with essays and musings on everything from festive food to anchovies – her love of the latter so great she gives them an entire chapter.

This article appears in Sunday Life magazine within the Sun-Herald and the Sunday Age on sale December 13. To read more from Sunday Life, visit The Sydney Morning Herald and The Age.