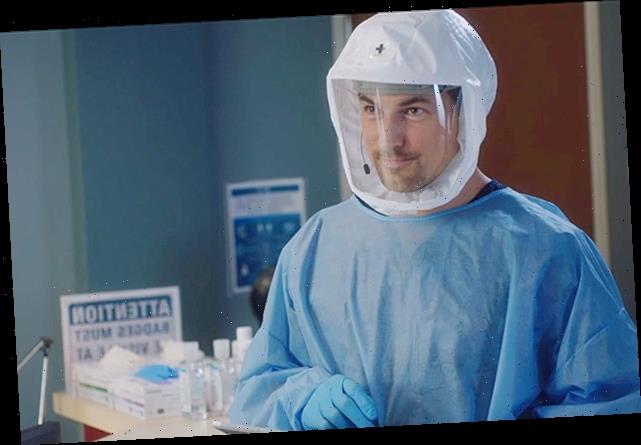 ‘Grey’s Anatomy’ returned on March 11 and delivered a crushing blow to fans. A main character was killed off in the devastating final moments of the episode.

The Grey’s Anatomy midseason premiere picks up where Station 19 left off. Deluca has been stabbed by the sex trafficker, and he’s being rushed to the hospital. Carina is by his side in the ambulance. When the ambulance arrives, Carina pleads with Owen to save Deluca.

Meanwhile, Winston and Maggie are in the midst of their hotel room bliss. They’ve blocked out the rest of the world for a brief moment. Amelia keeps trying to call Maggie but gets no answer. Amelia is frantic because she can’t get in touch with Maggie. This fear is familiar to her (i.e. Derek).

Meredith is still on a ventilator, and Bailey is watching over her in the chair next to Meredith’s bed. On the beach, Deluca shows up and surprises Meredith.

The Owen situation is nearly unbearable for Teddy. She walks into Tom’s room and says she just needed to be in the room with someone who doesn’t hate her. He cracks a quippy joke and makes her smile. Now’s not the time, but he wants her to admit that she never loved him.

Schmidt is feeling guilty about letting the sex trafficker go and possibly having a role in Deluca’s stabbing. Nico stresses he couldn’t have known, and he shouldn’t feel bad at all. Teddy and Owen work together during Deluca’s surgery. Deluca pulls through, even though the damage is worse than Teddy and Owen originally thought.

Jackson finds Maggie at the hotel and originally thinks he has the wrong room because Winston answers the door. Jackson, Winston, and Maggie head to Link and Amelia’s place. After a chat, Winston realizes that Jackson is Maggie’s ex-boyfriend. Awkward.

Teddy goes back to Tom’s room and says she did love him. That’s not what Tom wants to hear. It is, but it isn’t. In his eyes, if Teddy loves him, then they can be together because Owen doesn’t want her. But he’s asking Teddy to say she doesn’t love him because he needs it. He wants to be able to get off the ground when Teddy goes back to Owen (if he does take her back). Teddy gives Tom what he wants. “I never loved you,” she says.

Maggie and Amelia tell Zola about Meredith on the ventilator. Zola is so brave, just like her mother. She says they shouldn’t tell Bailey and Ellis unless they need to. Maggie and Amelia are to comfort her.

Deluca wakes up after his surgery. However, he begins to code in front of Owen. Owen opens him up right then and there. He has Teddy meet him in the OR. Deluca’s bleeding out in surgery. Teddy and Owen work on Deluca for 40 minutes, but they are unable to save him. Deluca dies in a heartbreaking twist of fate.

On the beach, Deluca gets the chance to talk to Meredith one last time. He admits that he never felt seen the way she saw him. She made him want to be better. “If I go back and you don’t, I’ll miss you,” Meredith says. In the distance, Deluca’s mother calls out to him. “I have to go,” Deluca says. Meredith replies, “It’s OK.” Rest in peace, Deluca. Grey’s Anatomy won’t be the same.