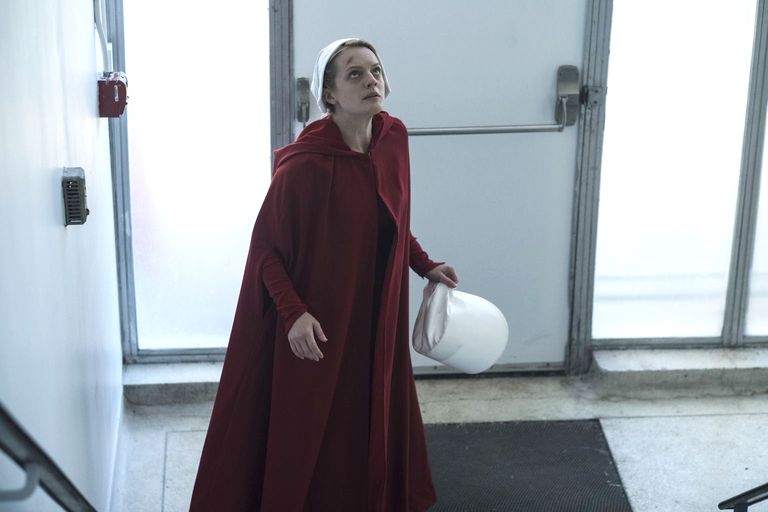 Last time we saw Elisabeth Moss’s June, she was being spirited away into a mysterious black van by Eyes, an ambiguous turn of events that may or may not be a rescue mission by the underground rebel group Mayday. “Whether this is my end or a new beginning I have no way of knowing,” went her voiceover, echoing the final words of Margaret Atwood’s novel. “And so I step up, into the darkness within; or else the light.”

So, which is it? As it turns out, the episode gives us a glimpse of both possibilities. It initially looks as though this will be June’s end, as she—along with Alma, Ofglen 2 and all the other handmaids who stood together and refused to stone Janine in the finale—is shepherded into a makeshift execution chamber by armed guards and has a noose placed around her neck. But by the episode’s end things have flipped, and a bloodied-but-unbroken June is facing a new beginning.

Even by the standards of The Handmaid’s Tale, this was a viscerally horrifying sequence on which to begin the season. The muzzled, uncomprehending handmaids being herded en masse into a wooden shack had echoes of gas chambers, and then came the horror of Fenway Park—Boston’s iconic ballpark—transformed into a gallows, with rows of nooses lined up for a mass execution. (Tune back in for Episode 2 if you want to see another Boston landmark make a horrifying post-apocalyptic cameo!)

At this point, it feels redundant to talk about how extraordinary and expressive Elisabeth Moss is, but even with half her face covered by a muzzle in this scene, she makes June’s terror and despair so tangible. Rationally, we know that Gilead is not going to kill a group of able-bodied, able-wombed handmaids. But this world is so fundamentally irrational, so founded on the zealotry of a powerful few, that neither we nor the handmaids have any reason to believe that logic will save them.

The lever is pulled and the handmaids do not hang, because this was a mock execution; a lesson for insubordinate handmaids. All that trauma, all those minutes of believing you were going to die, all just lead-up to a speech about obedience and faith from Aunt Lydia. June’s voiceover, as ever, nails it: “Our father, who art in heaven. Seriously? What the actual fuck?”

Not that she’s ever been a poster child for mental serenity, but Lydia’s sadism and mania seemed heightened here, particularly after the revelation of June’s pregnancy. After the mock execution, she has the handmaids stand outside in the freezing rain for hours holding stones aloft as penance for their defiance with Janine. As if that weren’t bad enough, they also have to listen to yet another monologue about how fortunate they are to be free from their sinful prior lives. “There is more than one kind of freedom—there is freedom to, and freedom from,” she explains. As American women with rights and liberty and autonomy over their bodies, they had freedom to, but now as reproductive slaves to a patriarchal autocracy, they have freedom from! Hmm. I’m just not sure I’m buying it, you know?

Thankfully, her spiel is interrupted by the news that June is pregnant. This prompts an incredible and unsettling scene from Ann Dowd in which Lydia ecstatically rings the church bell to announce this miracle. She seems almost physically possessed by the sheer emotion of it all. You might think this would put her in such a benevolent, forgiving mood that she’d stop inflicting torture on the rest of the handmaids, but if you think that, you don’t know Aunt Lydia.

3) Pregnant women are not necessarily protected in Gilead.

This was quite the revelation. Lydia does immediately get June into dry clothes and serve her soup with a smile (“You’re eating for two now!”), but when June refuses to eat, things take a turn. June’s assumption is that now that she’s pregnant, she finally has some autonomy, but Gilead always finds a way to ensure otherwise.

Lydia shows June into a room where a pregnant handmaid named Ofwyatt is chained. She has a bed and a rocking chair and a rug, a sad attempt at something like a living space, but she is unmistakably a prisoner. Ofwyatt has scars around her mouth from a suicide attempt—she drank drain cleaner, “endangering her child,” and so she’s spent her pregnancy shackled. This will be June if she starves her baby by refusing to eat.

As June finally eats her soup, Lydia ceremonially burns Alma’s hand over a gas stove, much to June’s horror. Apparently, nobody in Gilead got the memo about stress being a potential cause of miscarriages.

4) The flashbacks are still the show’s most disturbing scenes.

The visceral horror of the mock execution and June’s ear self-surgery paled, for me, in comparison to the flashbacks to the final days of American society, where June finds herself suddenly under the microscope for being a working mother. Society still seems mostly normal at this stage, but Luke has to sign June’s prescriptions for her, and when Hannah gets sick at school, June is interrogated by a nurse who clearly disapproves of her working full-time.

This is a quiet scene, and there’s nothing overtly threatening about it, except that every single beat is just a little off. The very fact that Hannah was taken out of school and to the hospital for a mild fever is disorienting to June, who was busy at work and missed the school’s calls. When June offhandedly says she gave Hannah a Tylenol, the nurse suggests she was trying to “bypass the school’s fever policy so you wouldn’t have to miss work.” It’s all mildly delivered, but the subtext is clear and painfully recognizable from the real world: a woman who has any priorities other than her child is suspect.

Later, June brings Hannah home amidst TV reports of an attack on the Capitol, and another on the White House. These are the terrorist attacks we saw Serena and Fred plotting in their own flashback last season, events planned and executed by Gilead to usurp the government’s control. And it’s already working—martial law has been declared, meaning the Constitution is suspended. As the episode ends, it becomes clear that this day we’ve been watching in June and Luke’s life is also the last day of normal life in America.

5) Is Serena going to hurt Hannah?

When Serena took June for that sadistic visit to Hannah in the finale, she said, “So long as my child is safe, so is yours.” But now that June has escaped (more on that in a second) we’re going to see just how vicious Serena is willing to get, especially after having the emotional experience of seeing “her” baby on June’s sonogram. The loss will sting a lot more now than it would have before that moment.

Every scene that takes place in that too-bright white hospital room is automatically surreal and almost dreamlike, and the passive-aggressive reunion between June and Serena was no exception—I wish there were more real-life situations where I could reasonably use this pitch-perfect burn: “Don’t get upset, Serena. It’s bad for the baby.”

The most striking Serena moment, though, was seeing her sitting in the window of June’s old room, bathed in light in a perfect mirror image of that iconic shot of June from the pilot.

Actual shivers. Elisabeth Moss did promise there was no way anyone could guess where Episode 1 ends up, and I absolutely didn’t expect June to go on the run this early in the season. I also did not expect her to rip a piece of metal out of her own ear using a pair of not-very-sharp scissors, but this episode was nothing if not a rollercoaster.

The Eyes were seemingly playing a long game when they brought June back to Aunt Lydia, keeping her in place just long enough to get her to the hospital. After a meaningful “Goodspeed, June” from an Eye and the discovery of a key in her boot, June escapes through the back door of the doctor’s office and follows a trail of handy red markers all the way to the back of a refrigerated truck, where she’s transported out of the hospital beside a few hanging animal carcasses. The parallels to the handmaids’ near-execution are not lost on her.

At a warehouse in Back Bay, June reunites with Nick, and I don’t know when this happened, but I seem to ship these two now (maybe it was just the sheer relief of June having something nice for all of three seconds in this hellish hour). Nick tells her to change her clothes and cut her hair, but she does him one better on both counts. She takes off her handmaid robes and burns them, and then she cuts not only her hair, but also a big chunk of her own ear, tearing out the metal cuff that marks her as a handmaid.

At first, I was unclear whether the ear tag is also a tracking device, but per showrunner Bruce Miller, it is not. Ripping out the tag isn’t so much a security move as a symbolic one. In this final moment, June is destroying every single marker of false ownership—the tag, the robe and wings, the long blonde hair the Commander made her wear down for their Jezebels dates. She belongs to no one now.