Two German WWII graves bearing Nazi swastikas have been removed from Fort Sam Houston National Cemetery and replaced with new headstones. The pair of headstones had become a long controversy over whether they were historical artifacts worth preserving or emblems of hate that should be destroyed, CBS affiliate KENS-TV reported.

The cemetery director, Aubrey David, led several workers to the graves of German prisoners of war Alfred P. Kafka and Georg Forst at around 8:15 a.m. Wednesday.

“Clearly, it took a long time for this to happen, and it’s obviously the right thing to have been done,” said Michael L. “Mikey” Weinstein, founder and president of the Military Religious Freedom Foundation, which advocates against unwanted religious proselytizing in the armed services. 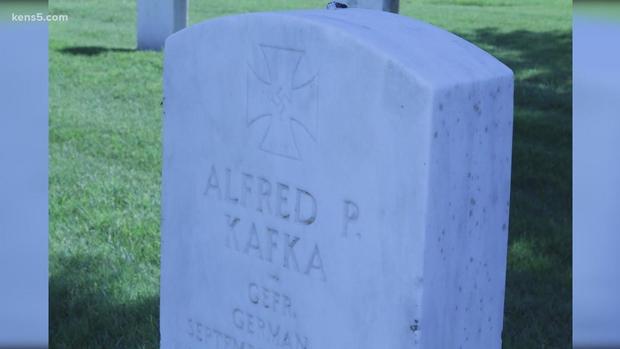 After learning about the gravestones last May, the foundation demanded that Veterans Affairs Secretary Robert Wilke order them removed. The group also wanted Wilke to make “an immediate and heartfelt apology to all United States veterans and their families.”

The VA refused, saying that it has a responsibility to preserve “historic resources,” even if they acknowledge divisive historical figures or events. But members of Congress, including Texas Sen. Ted Cruz and Reps. Will Hurd of San Antonio and Kay Granger of Fort Worth, responded by demanding the removal of the gravestones.

“I’m glad that the headstones have been replaced,” Rep. Joaquin Castro. “It’s jarring to think that symbols of the Third Reich and the Nazi regime would stand in an American military cemetery.”

It’s unclear if a third headstone that also bears Nazi symbols in Fort Douglas Post Cemetery in Utah has also been removed.

In June, when the U.S. Department of Veterans Affairs announced it would begin the process of replacing the headstones, VA Secretary Robert Wilkie wrote: “Americans must always remember the horror of the Nazi regime and why so many Americans sacrificed so much to free the world from its reign of terror. It is understandably upsetting to our Veterans and their families to see Nazi inscriptions near those who gave their lives for this nation. That’s why VA will initiate the process required to replace these POW headstones.”