Home » Hebru Brantley talks to Jalen Rose about using his art to spread his messages, feelings 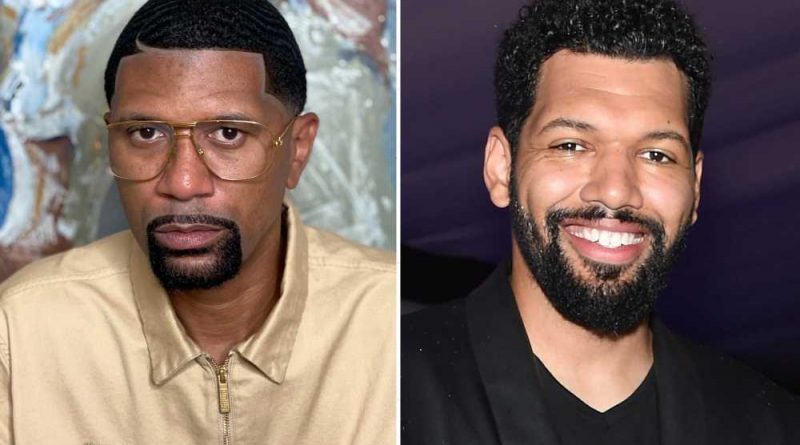 I first heard of artist Hebru Brantley, this week’s “Renaissance Man” guest through one of his sneaker collaborations. (If you haven’t seen his dope 2019 Adidas collab, check it out.)

But his work is collected by boldface folks such as George Lucas, Lenny Kravitz and LeBron James. In 2012 at Art Basel, Jay-Z dropped a cool $20,000 on one of his paintings. He has had exhibits all over the globe including Asia and South America. But he is a true Chicago guy hailing from the Bronzeville neighborhood, who got his start as a graffiti artist tagging his hometown. So that’s where I wanted to start: his roots.

He said his art is about creating narratives using characters informed by his childhood in the Windy City, where inspiration seemed to blow into his life at an early age, courtesy of his surroundings, basketball and his cousins.

“If you read the Sunday funnies, if you read, like, Charlie Brown, Peanuts, like, Charles Schulz could say whatever he wanted to say and would do it through these characters,” he told me. “And so that was sort of my way in where it’s like using these characters to get out my message, my personal feelings, beliefs. And Chicago really helped shape that because, you know, at a point that was all I knew, for real. And those streets shaped me, and the people there shaped me and my influences.”

If you saw Brantley in the produce section of your supermarket or at your neighborhood bar, you’d probably assume he went to college on a full ride for basketball, instead of attending film school.

“I grew up in a family of hoopers and the craziest thing, like I’m 6-foot-8. And all my cousins could draw, you know, and so it was like we would be out all day playing ball right off Lake Shore and come back to my aunt’s house, my grandmother’s house, whatever. And and just, you know, draw.”

He’s a fan of Bugs Bunny, collected comic books and was a young “aspiring sneakerhead” though admittedly he was too broke to truly be one. So he started sketching kicks instead. He also drew superheroes.

“And so that was, like, a big bonding time for all of us. And, like, you know, I had a cousin, one cousin that played in Louisville for a minute, Alvin Sims and Alvin and his brother man … They could draw and paint. And, you know, they were early inspirations to me.”

His other great influences were art luminaries of the 1980s like Andy Warhol, Jean-Michel Basquiat and Keith Haring, not just from an aesthetic point of view, but the way their work has been democratized and made accessible through brand collaborations and putting art on clothing or household items.

“I looked at like the ’80s pop movement, art movement in New York and like guys like Warhol and Haring. And that’s what really brought me in, you know, and Basquiat … Being able to have different points of merchandizing that have my art in it so people can participate at different levels. That person that buys a T-shirt today, next year, they might buy a print. After that, they might buy a painting. So, like, you know, as I grow, my audience grows with me. Allowing them to participate at different levels is really important.

But unlike his heroes before him, he has the advantage of utilizing social media. In today’s world, it’s not just about getting Jay-Z to drop a mint on your work to put food on the table (not that it hurts). Quite simply, Instagram has helped level the playing field for artists. They don’t need the gallery gatekeepers to give them exposure.

“The lore of the starving artist doesn’t necessarily exist. You know, there’s great opportunity and good money to be made in this arena.”

However, he said there is still a thrill in being shown in a gallery and interacting with art in person.

“It’s one thing, man, to look at art on Instagram and say, ‘Oh, that’s a cool image.’ But it’s another to actually go into a gallery or space and just be sort of consumed by it. It’s another kind of feeling and emotion that’s evoked. And so, you know, as often as I get a chance to do it, I’m here for it. I want to do it more and more and just continue that throughout my life,” he said.

In the Rose household, I have art from classic African-American artists like Ernie Burns and Charles White. Also I have works by my late Uncle Paramore Hicks Jr., who first made me realize that art and drawing was cool, because he was always painting family members or colleagues. Not that I was any good at drawing despite my best efforts. After interviewing Hebru, I decided to add his work to my collection. I am buying one of his Flyboy paintings, which has personality, color and character. And it has a nostalgic feel that brings me back to joy of boyhood, when a deep imagination made anything and everything feel possible.

Speaking of childhood, Brantley said he wants to bring art education into the modern era and show kids how it can change their lives.

In fact, he graciously offered to come to the Jalen Rose Leadership Academy for an assembly to help educate the students on being an artist and where it can land them. Hebru has been changing the game for years now, so it’d be an honor for all of us. And I think he just became my favorite artist.

Detroit native Jalen Rose is a member of the University of Michigan’s iconoclastic Fab Five, who shook up the college hoops world in the early ’90s. He played 13 seasons in the NBA, before transitioning into a media personality. Rose is currently an analyst for “NBA Countdown” and “Get Up,” and co-host of “Jalen & Jacoby.” He executive produced “The Fab Five” for ESPN’s “30 for 30” series, is the author of the best-selling book, “Got To Give the People What They Want,” a fashion tastemaker, and co-founded the Jalen Rose Leadership Academy, a public charter school in his hometown.