MPs usually put their tootsies up on a Friday… but not tomorrow: HENRY DEEDES sees Mrs Leadsom break the bad news

Once more unto the breach… Stiffen the sinews… Disguise fair nature – oh heck, you get the gist.

And so back to the battlefield the Government trudges today for a third crack at the Prime Minister’s Brexit deal.

Could Mrs May yet crawl out of here victorious? Let’s face it, the form book is hardly on her side. The splattered bloodstains on the green benches are barely dry from her last defeat.

But the Europhiles are close now. Grieve; Cooper; Boles – they sense that their chance to block Brexit is nigh. As such, Mrs May’s deal is worth a final shot. 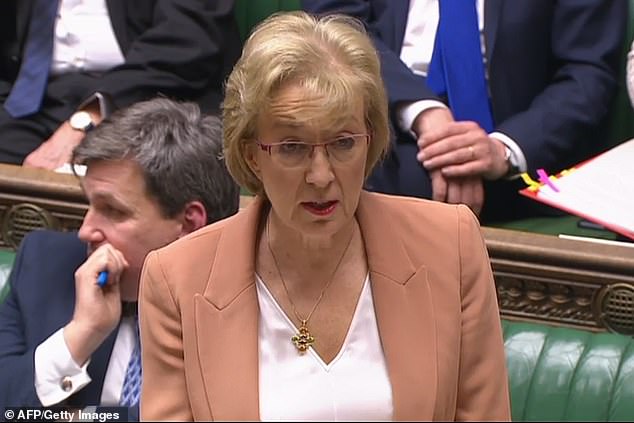 It was left to Leader of the House Andrea Leadsom to break the news yesterday that the House would stage a special sitting this morning so that the deal could be debated yet again.

Fridays are usually when MPs have their tootsies up – sorry, carrying out urgent constituency work. Their reaction to the announcement? Peeved.

By the time Mrs Leadsom added that Easter recess was also looking dicey, they were positively mutinous. Andy McDonald (Lab, Middlesbrough) looked like he was chewing a wasp.

Mrs Leadsom has had a decent Brexit. More pertinently, she has been a robust Leader of the House. She did not disguise her displeasure that her masters had sent her out to engage with the enemy half-cocked.

While she was able to announce the debate would take place, she was unable to confirm what the final motion would be. That man Bercow, you see. The Government will still be trying to circumvent his ruling that a vote could take place only if the deal was significantly different from the last one.

More from Henry Deedes for the Daily Mail…

No sooner had Mrs Leadsom spoken, than Chief Whip Julian Smith appeared beside her to whisper something in her ear. What he wanted she didn’t say. Worryingly, the whips’ office appeared to be making this up as they went along.

Iain Duncan Smith (Con, Chingford and Woodford Green) – last seen arriving at Chequers in a Mr Toad motorcar and leather gilet – leaned louchely against a pillar, eyebrows arched, like a 70s lounge lizard. How long before he starts dyeing his hair?

Mouthy Pete Wishart (SNP, Perth and North Perthshire) wasnae happy either. ‘Beyond a shambles’ was his verdict. There, there, soothed the matronly Leadsom. She eventually calmed Wishart down by referring to his recent birthday and inviting him to her office for a slice of Colin the Caterpillar cake. Later that afternoon, Mrs Leadsom returned to the House, accompanied by Attorney General Geoffrey Cox, who had endured three meetings with the Speaker that day, poor wretch.

She announced members will vote only on the deal’s withdrawal agreement, but not the ‘political declaration’ setting out plans for our future trade relationship with the EU. The Speaker grudgingly accepted the ruse.

If only Mrs May possessed just a smidgen of Michael Gove’s easygoing charm earlier in the day, we might today be celebrating our departure from the European Union. At Environment questions yesterday, puffy-eyed Govester didn’t look like he’d slept much, what with all that’s been going on lately. 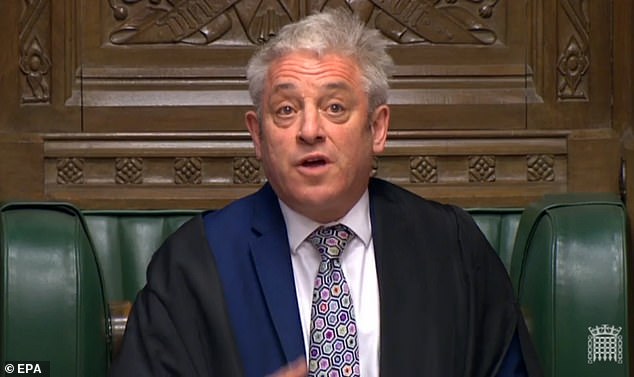 But as ever, he was his usual zestful self, answering queries with zingy enthusiasm.

When Gove paid tribute to ex-minister George Eustice (Con, Camborne and Redruth) the Speaker sourly suggested he was kicking off his leadership campaign.

Questions ranged from livestock welfare, waste incineration to puppy farming. There was even a query about the population of seahorses in our waters. Frivolous stuff amid the current Brexit drama? Absolutely not. Such matters are the meat and mashed potatoes of government.

Witnessing such matters being brought before the chamber and treated by ministers with the seriousness they deserve can actually be strangely humbling, reassuring even.

It is proof, if needed, that whatever constitutional chaos engulfs the United Kingdom, the rusty axles of this greatest of Parliaments continue to turn.