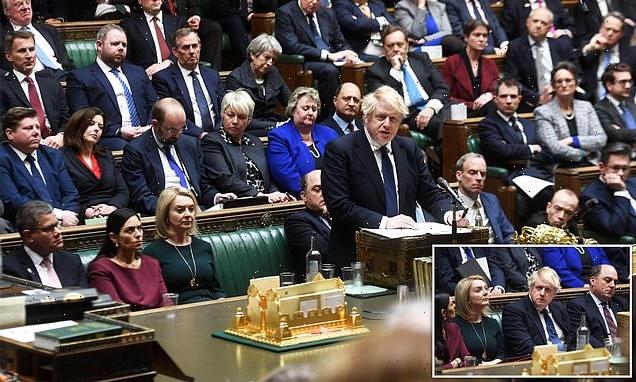 Boris Johnson was at his sombre best, and even the SNP agreed. History indeed: HENRY DEEDES watches the Prime Minister’s foreboding speech to the Commons

Amid the sunlight-filled Commons chamber yesterday, there was a dark sense of foreboding.

An eerie, hairs-on-the-back-of-the-neck feeling generated by events thousands of miles away that had changed the world irrevocably.

The Prime Minister’s kitchen mop hair stood at right angles as usual as he rose to speak at the despatch box at 5pm.

But there was nothing at all clownish about his delivery. He was coldly serious and the House was utterly still.

Usually by teatime on Thursdays, MPs have either decamped to Westminster’s watering holes to imbibe and indulge in a little light treachery or, more commonly, headed back to their constituencies for a long weekend. 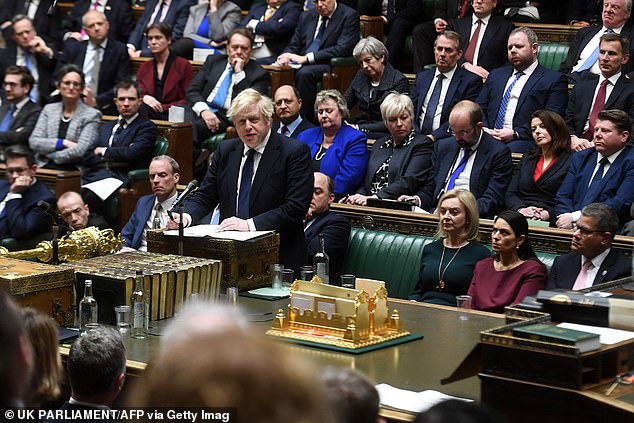 Boris Johnson (pictured) had prepared an excellent speech for Commons on Thursday, warm toward the people of Ukraine and scathing about Vladimir Putin

Yesterday it was a full house. For 11 minutes the PM spoke without pause and was heard almost entirely in ecclesiastical silence. And he was good. Very good.

So often Boris’s attitude to the Commons is to turn up and wing it. But he had prepared an excellent speech, warm toward the people of Ukraine and scathing about Vladimir Putin. And it was turbo-boosted with the requisite verbal oomph!

Regarding his appearance, it had clearly been a night of much tossing and turning. During his earlier address to the nation from Downing Street at 12pm, his hooded eyes were circled by dark spirographs.

Someone really should have dashed to Carrie’s boudoir to fetch the powder puff.

Now he was back in action with his Cabinet either side. And what a long line of grimaces they presented. Culture Secretary Nadine Dorries sucked furiously on something. An indigestion tablet?

As far as relations with Putin were concerned, Boris made it clear there was no turning back.

No more pussyfooting about. Russia was now a pariah state. His language toward its president was unbridled.

He was a ‘dictator’, a ‘bloodstained aggressor who believes in imperial conquest’ and a leader who was embarking on a ‘hideous and barbaric venture’. 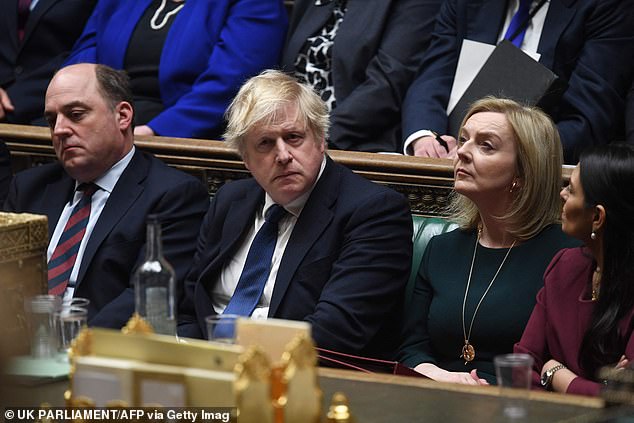 Regarding Boris’s appearance, it had clearly been a night of much tossing and turning. During his earlier address to the nation at 12pm, his hooded eyes were circled by dark spirographs

We heard the names of a string of new Russian companies joining the London roll-call of shame.

Among those now blacklisted was airline Aeroflot. That word pinged out Boris’s mouth with a sizzle of disgust, like a flake of garlic hitting a hot pan. ‘Slava Ukraini!’ he cried. ‘Glory to Ukraine!’

But as the PM resumed his seat the House did not cheer. The mood was too bleak for that, but there were roars of agreement on both sides.

Sir Keir Starmer made a decent speech but he lacks Boris’s way with words. Cliche tends to follow cliche.

He talked of how ‘in this dark hour we can step towards the light’, which sounded as though it might have been lifted from a happy-clappy New Age Bible.

A sure sign of the mood yesterday – subdued and respectful – was that when Ian Blackford was called to speak, no one groaned.

Usually, the SNP leader’s speeches are preceeded with a lengthy heaving of breath that can be heard all the way down Whitehall. Mr Blackford was supportive, too. Boris thanked him for his ‘wisdom and statesmanship’. Another one for the record books.

It was then that Defence Secretary Ben Wallace slid behind the PM to show Liz Truss something on his mobile phone.

From where I sat it appeared to be a photograph. The Foreign Secretary pulled a worried grimace as she viewed it. The debate had certainly attracted interest. Up in the brimming public gallery necks craned eagerly.

Paying a visit from the Lords was Labour peer Lord Foulkes, who looked on lugubriously. It takes a lot to put him off his 6pm snifter I can tell you. 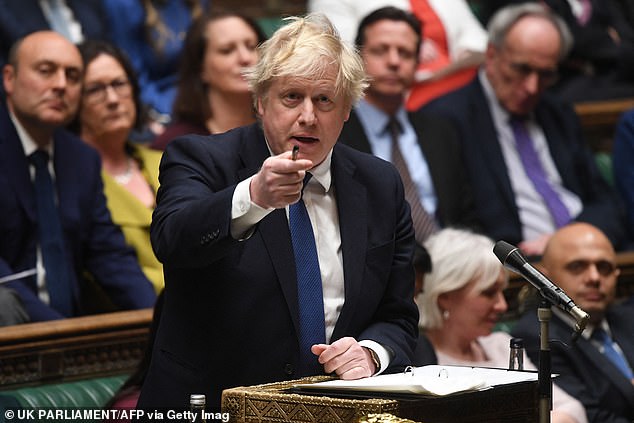 As far as relations with Putin were concerned, the Prime Minister (pictured) made it clear there was no turning back. No more pussyfooting about. Russia was now a pariah state

Someone who knows a lot about Putin’s vile nature is Theresa May, who was in charge during the Salisbury Novichok poisonings in 2018. The former PM demanded that Russia feel the ‘cold wind of isolation’.

That word ‘isolation’ was pronounced with a slight hiss. Mrs May certainly knows how to turn the air frosty.

The session was not without its useful idiots. Clive Lewis (Lab, Norwich S) demanded Nato now seek a negotiated settlement with Russia. As Putin’s missiles rained down from the sky!

Down in the front, Sir Keir shuffled his feet awkwardly as though one of his dogs had just let out an embarrassing burp in a restaurant.

Mr Lewis, you may be unsurprised to learn, is supporter of Jeremy Corbyn, who was present but didn’t speak. He sat there fiddling urgently with his mobile phone. Possibly deleting his Kremlin contacts.

He announced his boss Alex Salmond had suspended his talk show with Russian propaganda channel RT until fighting ceased.

The Conservative benches jeered. But for the most part, tussles were minimal. The real fighting now takes place in Ukraine.