The royal wedding is almost here, and fans will understandably have questions about all of the details surrounding the ceremony on May 19. For example, what time will the festivities of Prince Harry and Meghan Markle’s wedding start — and what time does the Queen arrive at the royal wedding? Queen Elizabeth II doesn’t have a formal entrance time, but it’s safe to guess she’ll arrive with the other members of the royal family.

The U.K.’s Express reports that members of the royal family are expected to start arriving at St. George’s Chapel as early as 6:00 a.m. ET. Other outlets have reported that the royal family is expected to arrive at the church at 6:20 a.m ET. There’s no confirmation of exactly what time the Queen of the United Kingdom will arrive, but it’s safe to say she’ll be in her seat well before the one-hour wedding ceremony starts at noon. During Prince William, Duke of Cambridge’s wedding in 2011, Queen Elizabeth II arrived with her husband, Prince Philip, Duke of Edinburgh, their son, Prince Charles, Prince of Wales, and Prince Charles’ wife Camilla Parker-Bowles, Duchess Of Cornwall.

When the Queen does arrive, though, fans will likely be able to see her grand entrance into the church. According to Express, the royal family members will approach the church using Windsor Castle’s "Long Walk," so fans can see them approach St. George’s Chapel. And while many royal family members will likely arrive by car, don’t expect to see Prince Harry and Prince William on the same path. Express noted that the groom and best man will enter the church through a side entrance at the West Steps, where they’ll still be able to see some of the crowds of bystanders. 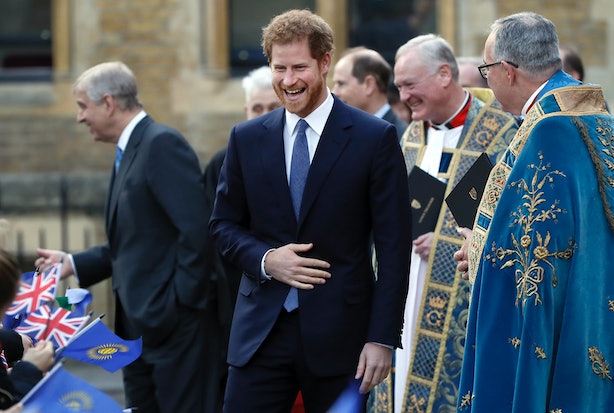 The royal family aren’t the first guests to arrive at the wedding, though. The 1,200 members of the public who are lucky enough to attend the ceremony arrive first, at 9:00 a.m. BST/4 a.m. ET. According to Royal.UK, the lucky 1,200 will include people from "a broad range of backgrounds and ages, including young people who have shown strong leadership, and those who have served their communities." These guests won’t be able to sit inside St. George’s Chapel, but they’ll be inside the Windsor Castle grounds and will still see the procession into the ceremony. After that, the 600 guests who are attending the chapel ceremony will arrive between 4:30 a.m. and 6:00 a.m. ET. The royal family will arrive after the other guests are seated.

And while it’s not clear exactly what the Queen will do at the royal wedding on Saturday, she’s already played a huge role in the events surrounding it. Queen Elizabeth II gave her official blessing to Prince Harry and Meghan Markle’s upcoming marriage, issuing an statement about her grandson back in March. Here’s what the Queen said about Prince Harry and Meghan Markle’s union:

It’s sweet of the Queen to refer to Harry as her "most dearly beloved grandson" — it’s clear there’s a special bond between the two of them. She’s not the only royal family member who’s instrumental in helping the wedding come together, though. Prince George and Princess Charlotte will serve as a page boy and a bridesmaid, respectively, alongside several other children. And, of course, Prince William is Prince Harry’s best man. The Duchess of Cambridge, meanwhile, will be at the wedding, but she doesn’t have an official role in the wedding party.

While fans don’t know precisely what Queen Elizabeth II will do at the ceremony on Saturday, it’s clear she approves of the couple’s union. The royal wedding is an event fans won’t want to miss. And the royal family’s actions may be as memorable as the event itself.