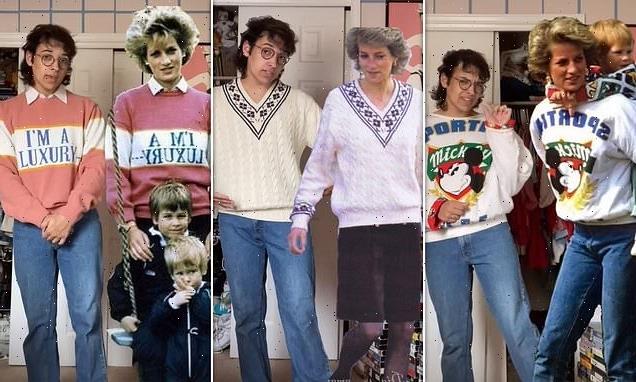 He’s a Di-hard fan! US TikTok star who became obsessed with Princess Diana after watching The Crown spends $1,500 recreating her wardrobe

A die-hard royal fan has gone viral on TikTok with a video showcasing his lookalike Princess Diana wardrobe.

Retail worker Kaden Luna, 20, from Austin, Texas, became obsessed with Diana after watching Netflix series The Crown and set about recreating some of her most famous looks.

The social media user has spent $1,500 on sweaters and cardigans after falling in love with the princess’s style. Some are vintage pieces that are the same as the ones worn by Diana, while others are ‘knock-offs’.

Kaden revealed his extraordinary collection in a TikTok video that has been viewed more than two million times. 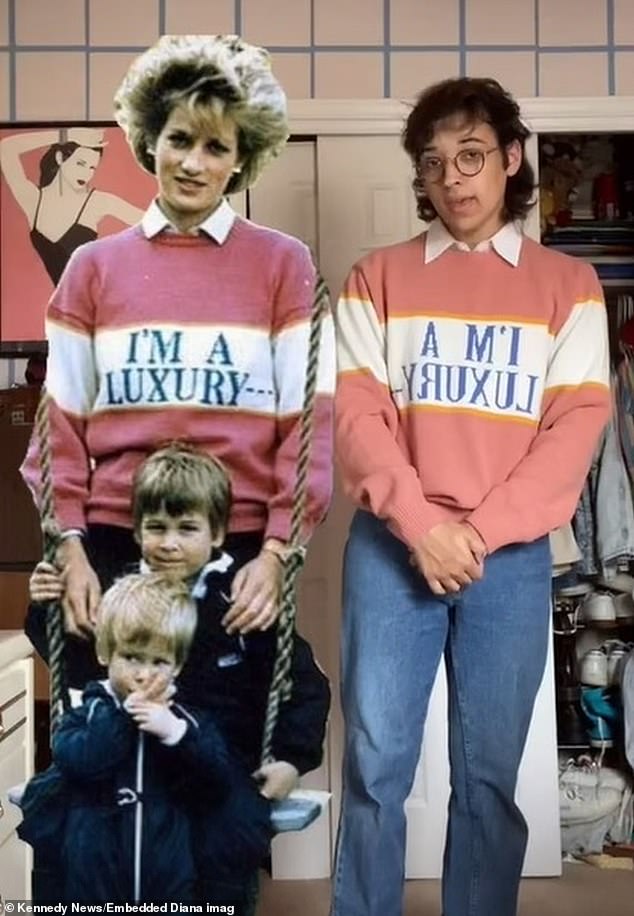 Iconic: Gyles & George created the original ‘I’m a Luxury’ jumper in the early ’80s and it was worn by Princess Diana in the ’90s. Right, Kaden styles his version with a shirt, just like Diana 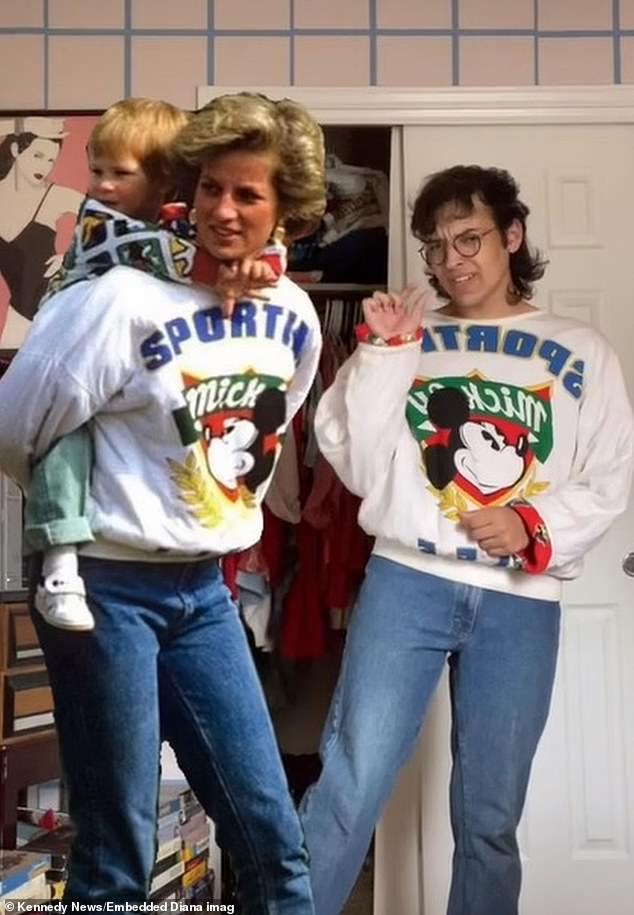 Cartoon queen! Princess Diana opted for this playful Mickey Mouse sweater for a day out with Prince Harry in 1987. Kaden spotted a version that looks just like the princess’s online 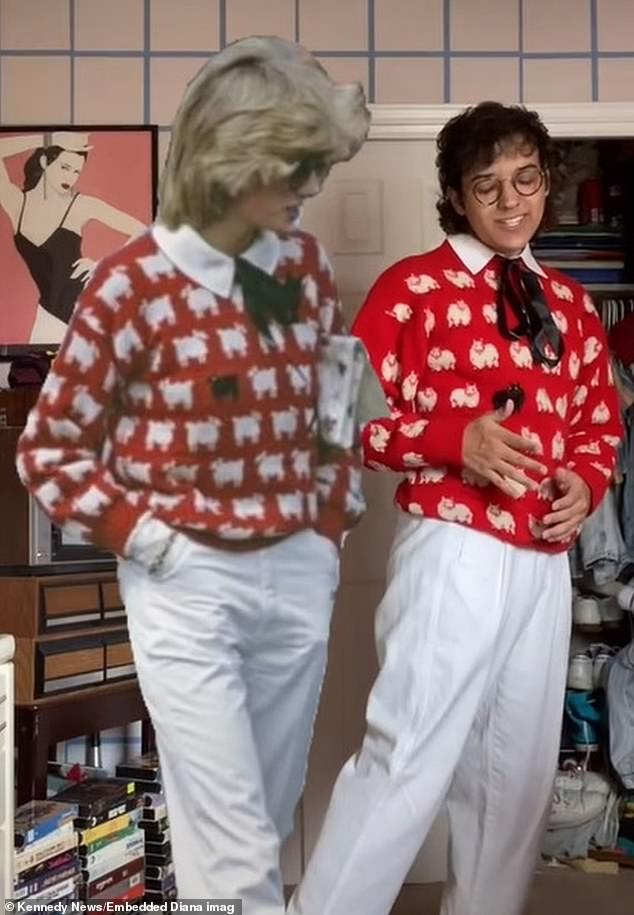 Proud to be a sheep… Fashion follower Kaden found a ‘knock-off’ version of this sweater loved by Diana and worn on several occasions, including to the Guard’s Polo Club in 1983 (pictured) 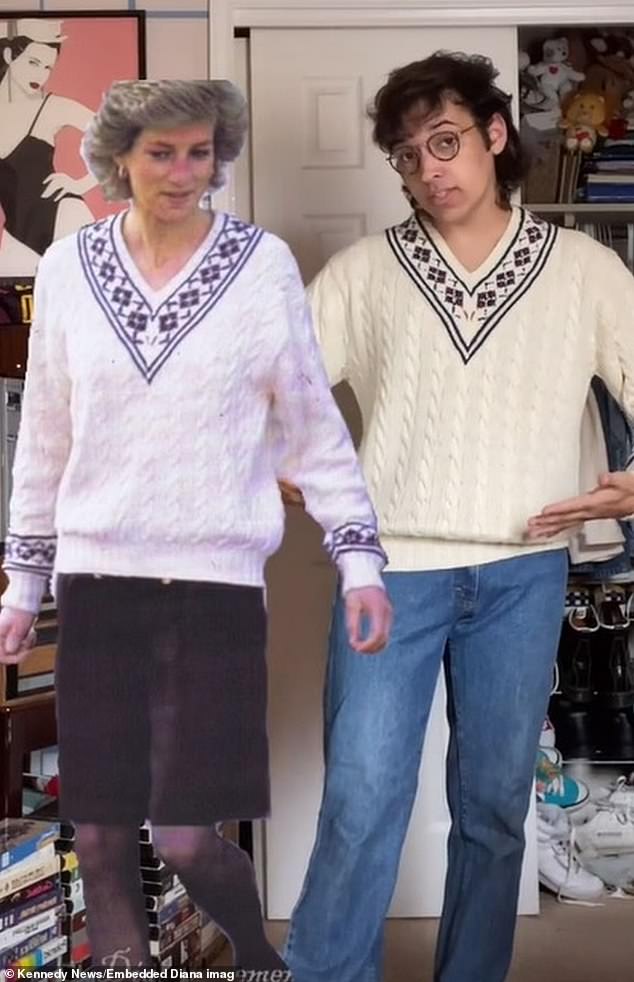 Knitted perfection! Kaden models his chunky knit cream sweater that looks just like one Diana wore with a skirt and tights. The royal fan has spent $1,500 on his wardrobe

He said: ‘I would say I became a fan of Diana a few months before the fourth season of The Crown came out on Netflix.

‘I’m not really sure why it started though, I just saw one sweater which I thought was cool. It was the red sweater with the sheep on it. I tried to find it and found a knock-off of it, which was close enough.

‘Then from there, I started skimming through more photos and seeing more sweaters I liked. That would lead me then to trying to track them down.

‘I don’t really categorise the clothes by where she wore them. I’ll usually just be scrolling through pictures, and if I see something I like, I’ll try and track it down using general terms. I do genuinely like the clothing too.

‘I definitely spend too much. Some aren’t too bad – especially if there aren’t a lot of people who knew she wore that particular outfit.

‘I managed to find most of my items off Depop. But I’ve also found things through Etsy, Ebay and Mercari. 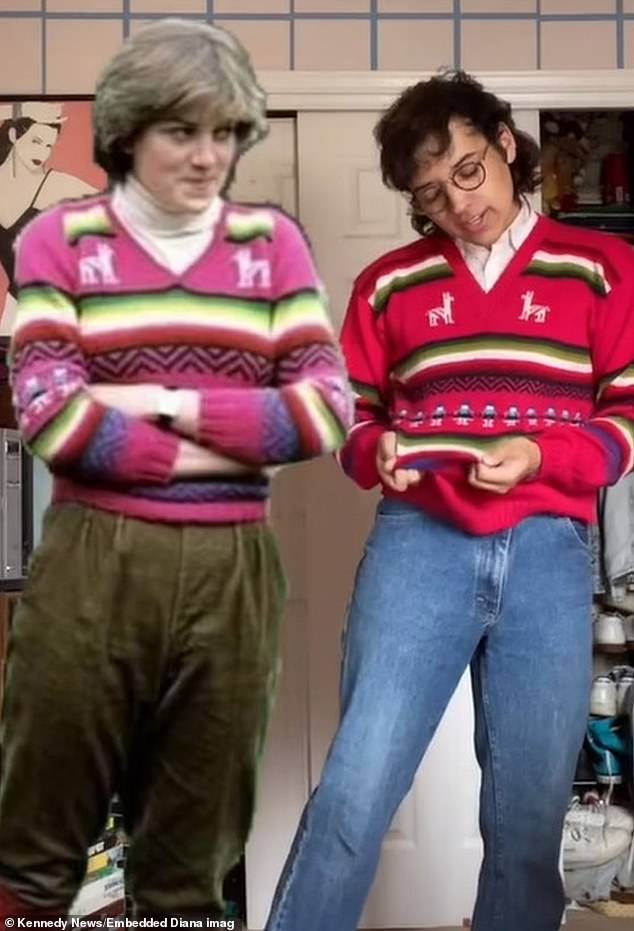 Young Diana: Here Kaden recreates a look worn by Diana, then 20, at a photo call with Charles on the Balmoral Estate. Kaden found a lookalike version of the striped pink sweater 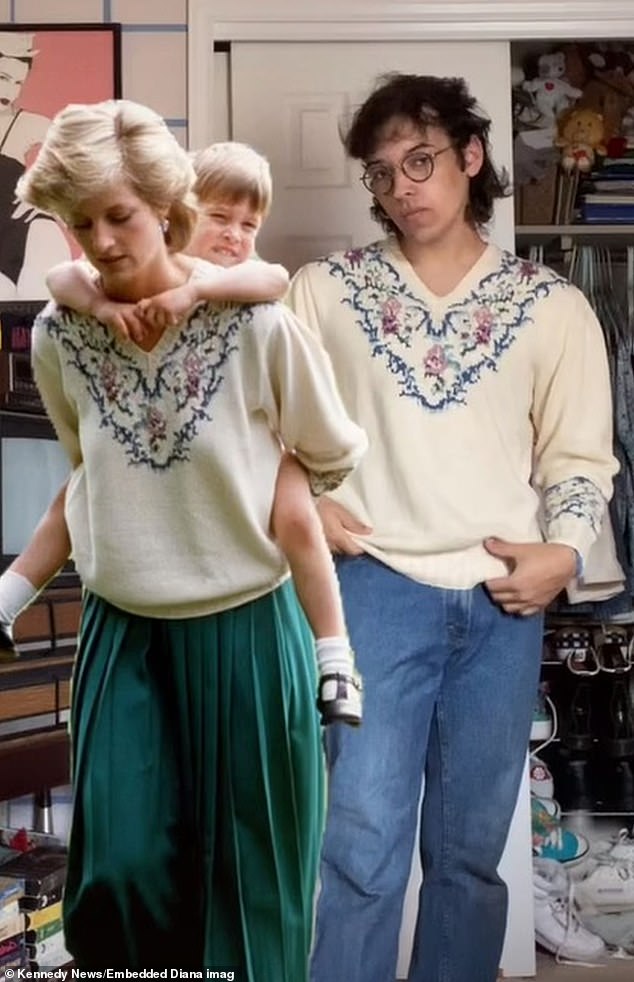 Family time: Princess Diana wore this cosy jumper – copied by Kaden – for a stroll through the grounds at Highgrove in June, 1986. A young Prince William is on her back 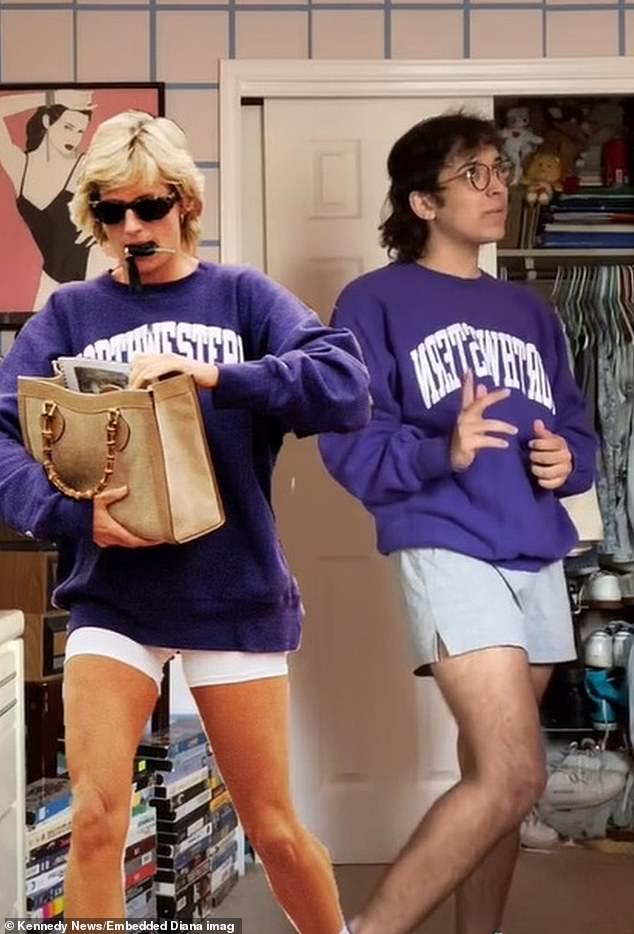 Sport chic! Diana stepping out in a Northwestern sweater in 1996. Kaden found the same collegiate piece online. It is also the same university that Meghan Markle attended 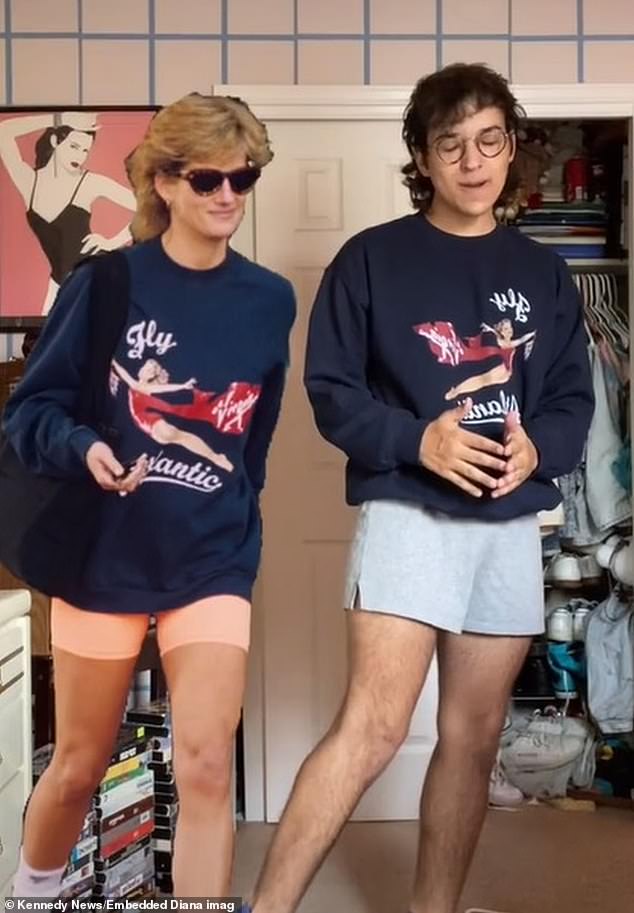 A sky-high hit! Diana showed off her love of Virgin Atlantic in a branded jumper at the Chelsea Harbour Club in 1995. The Crown super fan Kaden was able to snap up his own version

Kaden categorised many of the looks he has recreated as ‘classic 80s ugly sweaters’. He said the fashion has led him to learn more about the princess’s life.

‘The only media we get about the Royal Family, at least for where I am in the US, is in the form of magazine covers about Royal anniversaries or Prince Harry or whatever,’ he said.

‘So I really didn’t know much about her. But I kept seeing photos of her everywhere, and I really liked the way she dressed.

‘Her outfits were classic 80s ugly sweaters, and from there it snowballed into me learning more about her as a person. 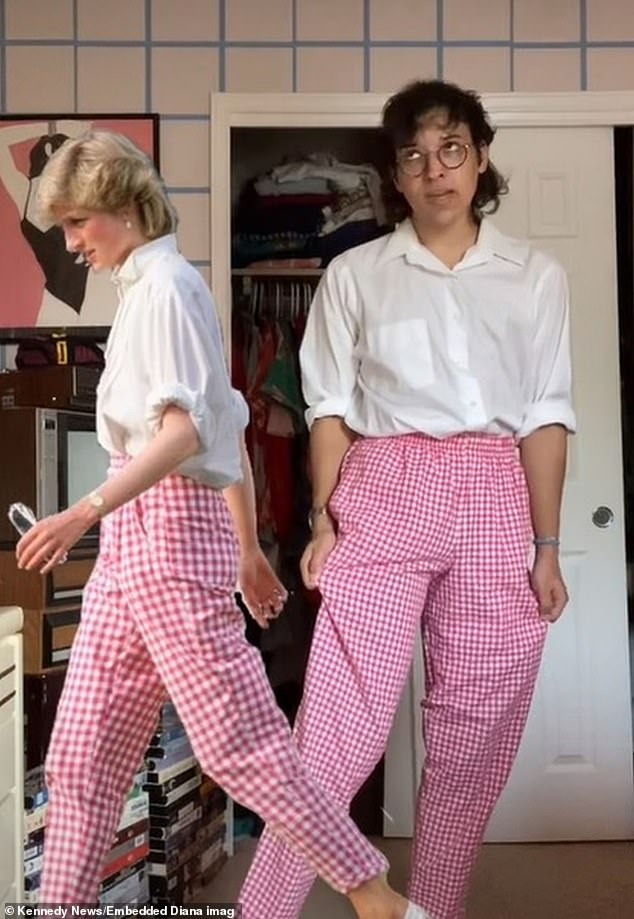 Pink for the polo! Princess Diana wore these pink gingham pants on a day out in 1986. Right, Kaden managed to find his own pair, which he wore with a rolled up shirt like the princess 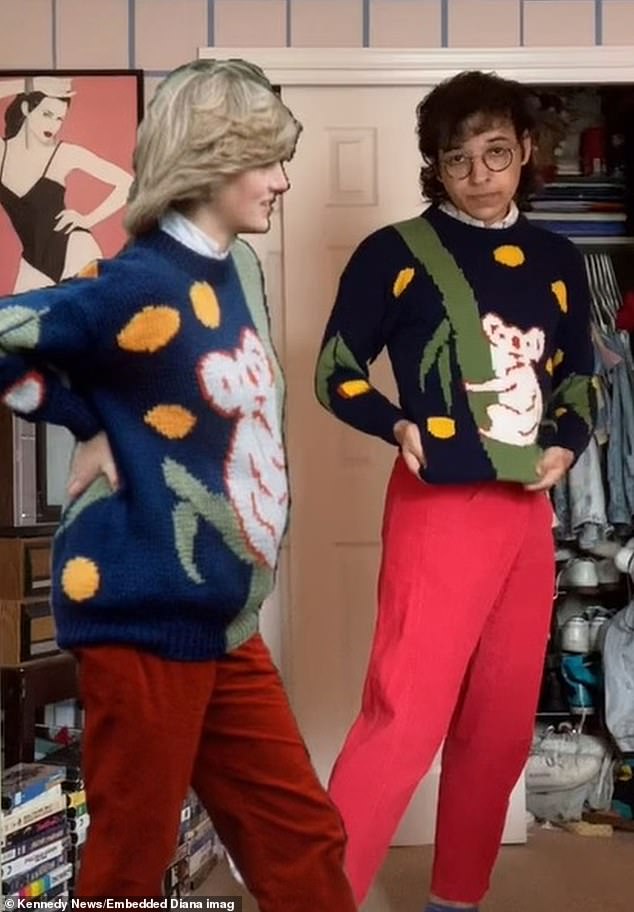 Perfect for a baby bump: In 1982 a pregnant and winswept Princess Diana was photographed wearing her chunky bright blue koala jumper at a polo match 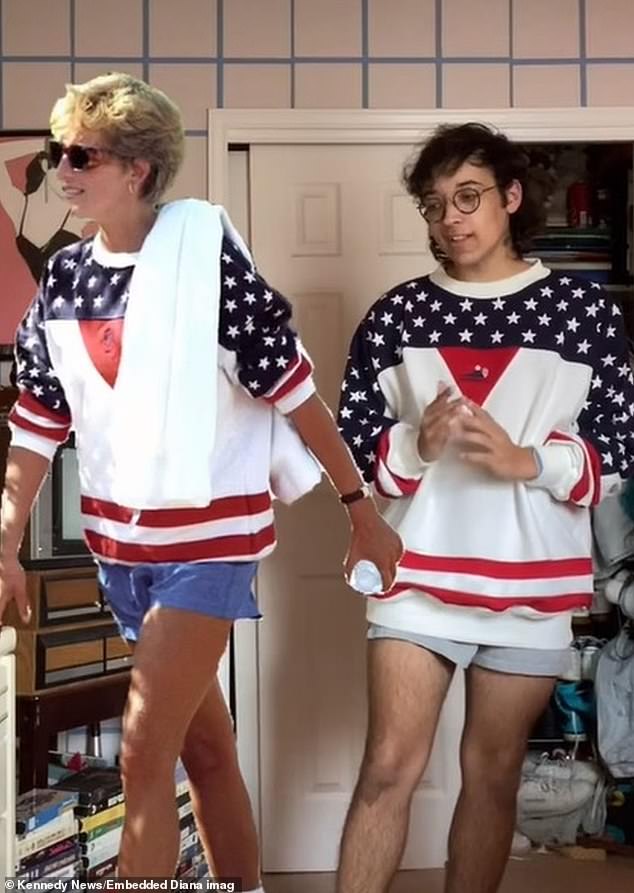 Stars and stripes! This famous look was worn by Diana to play a spot of tennis at the Chelsea Harbour Club in 1994. Kaden’s version, found online, looks strikingly similar 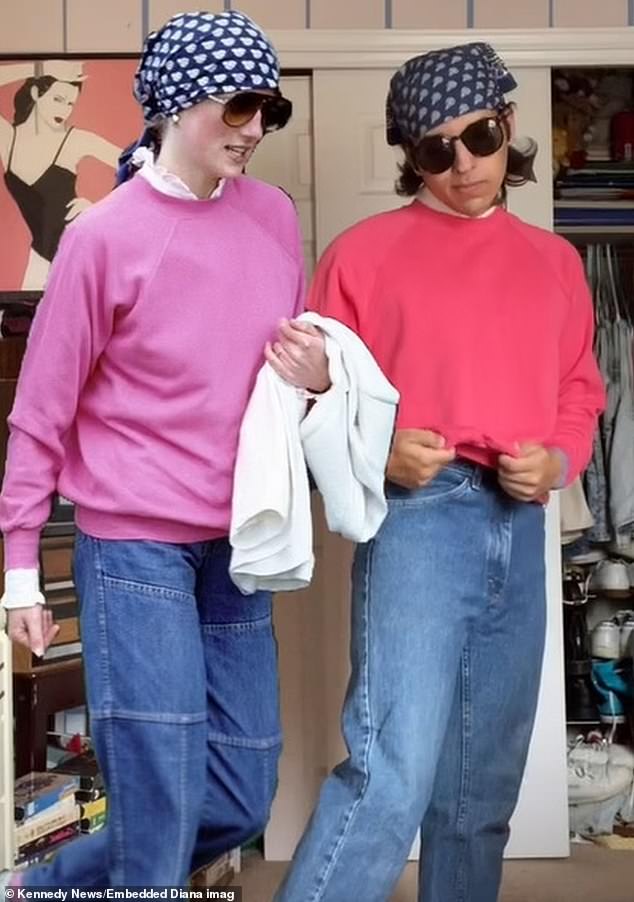 Ultimate cool girl: Kaden pays attention to the entire look – not just the jumper – as shown in this ensemble above, which is inspired by the one worn by Diana to the polo in 1986 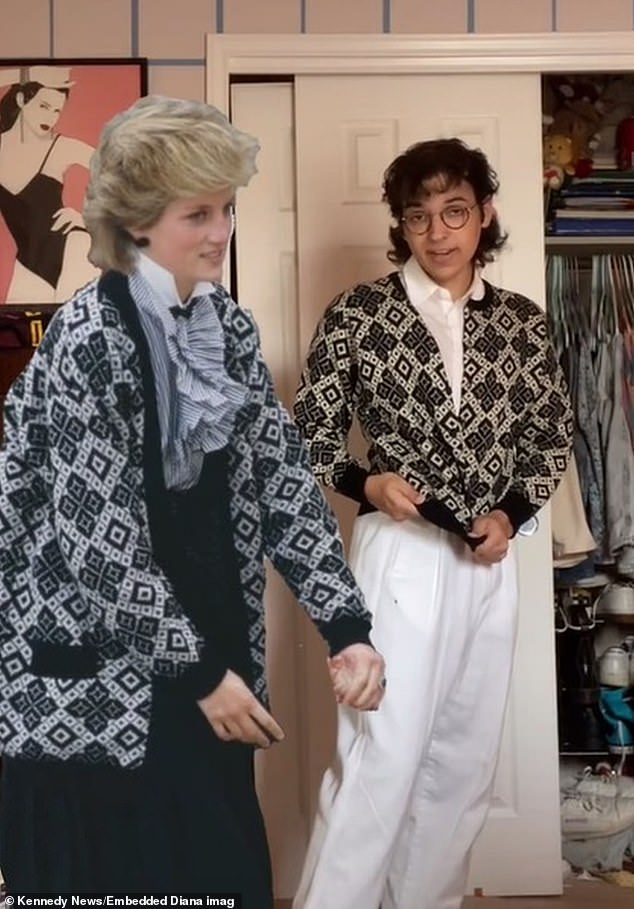 Comfort first: Diana wore this sweater when departing Aberdeen airport in September 1986. Kaden recreated the look at home but decided to wear white trousers instead

‘Then it became an interest in her and not just me thinking she had some cute outfits.

‘I’ve been watching more documentaries about her since I started collecting her clothes. I learnt more about her as a person, about how she grew up, her family history, how young she was when she got married.

‘I really got into her because of all the important issues she spoke up on, like with landmines and AIDS. I know so much about her now, not just the fact she dressed cute and looked pretty.’ 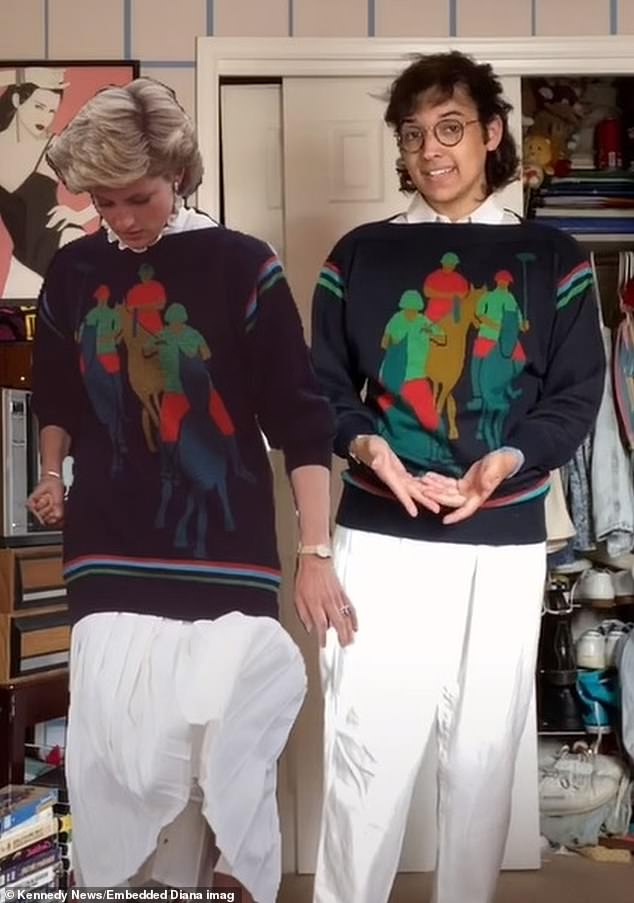 Matchy, matchy! This Diana look and flowing white skirt was worn to arrive at Aberdeen airport in 1986 ahead of the family’s annual summer holiday in Balmoral. Kaden found a similar version 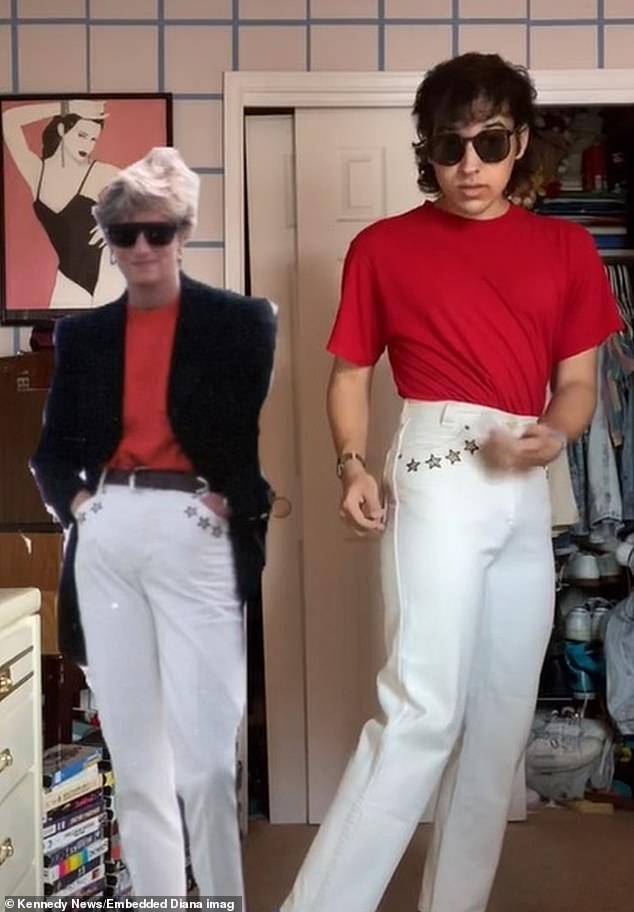 He’s a star! Kaden replicated this look of a red top worn with white jeans with star detailing. Diana added a chic blazer and a pair of shades but Kaden went without

Maryrose Simpson commented: ‘Netflix should of hired you for costume stylist.’ Cara said: ‘My jaw dropped and never went up again.’

Raye commented: ‘This is such an extremely niche specific special interest and I love it.’

Kate Goodell said: ‘Wish I could just appreciate something without seething with jealousy.’

A royal hit! The video has been viewed more than two million times and met with praise by fans