Home » Lifestyle » History of Manchester Pride: 'It isn't for anybody unless it’s for everybody' 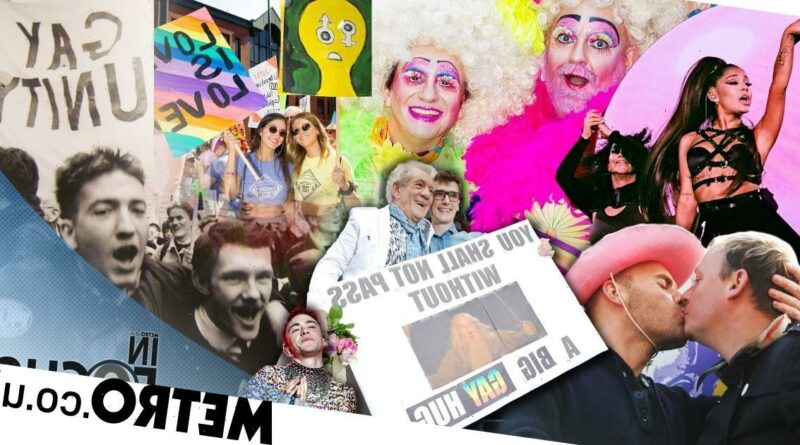 Affectionately known to many as ‘Queer Christmas’, ​for it’s ability to bring chosen families together each year, Manchester Pride is one of the most anticipated and best-loved events in the LGBTQ+ calendar.

It’s a celebration that holds a special place in my heart. I have family from the North West and I spent many of my ‘formative’ years in the city after moving there at 18. But it’s not just memories of my former home that makes me think fondly of Manchester Pride. My first job was actually working on the big event itself, as a press officer.

It’s hard to put into words what it’s like to be part of a team that creates such an epic and incredible occasion.

There’s moments I’ll never forget, such as first seeing Manchester’s Sackville Gardens become a sea of light at its Candlelit Vigil, held on the Monday of Pride each year in remembrance of all lives lost to HIV/AIDS.

Then there are the times that still make me smile, like Alexandra Burke sharing her birthday cake with the backstage team – and saying she liked my hair!

Or when I had to step in for a colleague and interview queer singer-songwriter Patrick Wolf after he’d performed at the event. I remember feeling jittery with nerves; not only did I adore his music, but he was also an early crush of mine.

Since those days, my life and job may have moved on, but I’ve returned almost every year to Manchester Pride on the August bank holiday weekend. And I can still confirm, ‘Queer Christmas’ is exactly what it is. ​​ 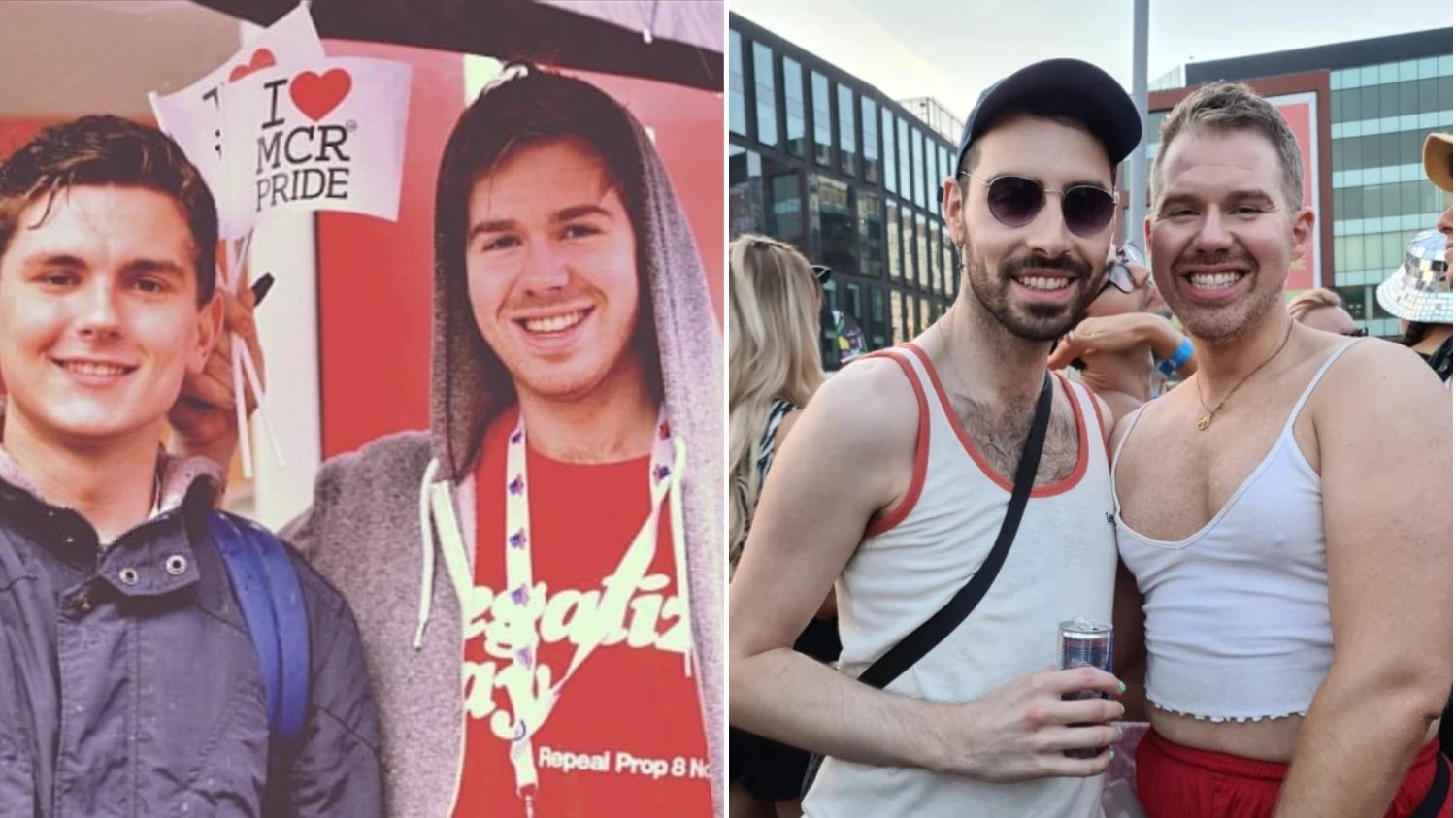 Although there are stories that the event was first founded in 1985 when Manchester City Council awarded a £1,700 grant to put on a two-week celebration, other accounts refer to it being born in 1987.

It was said to be the brainchild of Peter Beswick – licensee of the ​long-standing Rembrandt Bar in Manchester’s Gay Village – along with his partner Duncan, after the pair organised a bring-and-buy sale and raffle outside the bar to raise money to support people living with HIV/AIDS.

Back then, many of the Gay Village bars had blacked out windows to protect their patrons and staff, and homophobic police raids were not uncommon.

The following year, a series of marches and demonstrations for LGBTQ+ rights were held in Manchester, reflecting the way many of today’s Pride events have grown from the seeds of activism. The first was in 1988, to protest Thatcher’s homophobic Section 28 law, followed by marches for equalising the age of consent, in 1989 and 1991.

‘My first Manchester Pride was a protest’ recalls Tim Sigsworth, CEO of LGBTQ+ youth homelessness charity akt. ‘I felt exhilarated and petrified. It was that moment that really sparked a deep, long-life need in me to fight queerphobia.’

By the early nineties, the Village Charity had established a festival then known as Manchester Mardi Gras, ‘The Carnival of Fun’, making the city’s annual LGBTQ+ event louder and prouder than ever before.

‘We didn’t want the Gay Village to become a closed-off ghetto where it was just us,’ says Chris Payne, a founding member of the North West Campaign for Lesbian and Gay Equality (1987) and prominent LGBTQ+ activist in 80s and 90s Manchester. ‘We wanted to welcome everybody, as long as they respected us and our space.’

So in 1993, the event first went ‘public’ with the parade marching beyond the perimeter of the Gay Village and into the city centre.

The response? A mixture of shock and humour, recalls Chris, explaining: ‘There was strong HIV/AIDS and LGBTQ+ messaging and controversial outfits. It was in your face but the public loved it.

‘The parade changed people’s views and enticed them into our space, to see we weren’t all devils with two-heads’, he jokes. ‘Families coming in together, kids, and big burly dads all covering themselves in rainbow and glitter.

‘They’d go back home, to work or to their local bars and people would say: “Been out with the gays, have you?” And they’d say: “Yes I have, and it was a laugh. Come and join us next time!”’

Chris partly attributes this attitudinal shift to the solidarity and support shown to the LGBTQ+ community by Manchester City Council, and later the local media.

‘Supportive councillors like [Labour MP] Pat Karney helped make stuff happen. They’d say, “This will be done. The roads will be closed and we’ll give you a small kickstart branch.” It wasn’t huge amounts, but was still a massive help.

‘It sent a signal that said “this is OK now,” and was followed by support from BBC Radio Manchester, Piccadilly Radio, the late ‘Mr Manchester’ Tony Wilson and BBC North West.’

As Manchester Mardi Gras continued to grow, for the first time ever, in 1999, the Gay Village was fenced off for the weekend’s celebrations. The parade remained – and still remains – free to attend and allowed party-goers to roam the city centre.

Although the festival went on to be rebranded Gayfest in the early noughties, it was finally christened ‘Manchester Pride’ by the tourist board after the city was chosen to host the esteemed Euro Pride event in 2003.

As the scale of Manchester’s celebration of its LGBTQ+ people began to filter far beyond the city, it prompted other members of the community across the UK to sit up and take notice.

‘Manchester Pride was one of the reasons I moved there’, explains Toby Whitehouse, director and co-founder of national LGBTQ+ radio station Gaydio.

‘I visited and saw this really inclusive, welcoming environment and, as a young gay man, thought “I want a piece of that.”’

Alongside co-founder Ian Wallace, Toby created Gaydio as a pop-up station to complement Manchester Pride and similar events. He’s since worked alongside Pride for almost two decades, during which the Gaydio Dance Arena was introduced in 2013.

‘That was a peak moment for me,’ remembers Toby. ‘We’d covered Pride before, from an editorial perspective, but we’d never had a partnership. Things progressed and we ended up with a 2000-capacity, warehouse style club in a car park in the village.

‘Walking into that space, thinking back to being that young, gay man in the Midlands, I couldn’t have imagined this would be what it would all lead to.’

As Manchester Pride’s profile went from strength to strength, it soon attracted big name talent, with the likes of Alesha Dixon, Blue, Dannii Minogue and Texas all performing over the years.

One long-time supporter of the event and wider LGBTQ+ community is much-loved Mancunian singer-songwriter Rowetta Satchell, who famously performed as a singer in the Happy Mondays.

‘I loved performing at Manchester Pride,’ she recalls. ‘My first was in 2005 and Graham Norton introduced me, which was fabulous, and I did it for several years after.

‘My favourite performance, which many will remember me for, is where I wore a rainbow feathered dress with twelve dancers and brought my mum up on stage to dance with me.

‘Manchester Pride is such an important space for all LGBTQ+ people to feel safe and supported,’ Rowetta continues. ‘I’m very much proud to have been part of that as an ally.’

These days, the event is recognised as not just one of the best Pride celebrations in the UK, but across the globe.

‘Over Manchester Pride weekend our hotels are full with visitors from around the world, our bars, restaurants and retailers all have great weekends, and the city and everybody in it always looks fabulous,’ says Victoria Braddock, Director of Marketing at Marketing Manchester.

‘Seeing people get off the train or out of taxis from the airport – wide-eyed, taking in the energy and vibrancy of a city draped in its very best colours always sticks with me. It’s a truly special weekend.’

While 2019 still offered festival-goers the community-focused celebrations with the Gay Village Party, the event also saw the introduction of Manchester Pride Live, a huge outdoor site in Mayfield Depo. ​

Headlining the event was pop sensation Ariana Grande. This was a particularly raw and emotional performance both for the singer and for the many audience members who had been impacted by the atrocities of 2017, when 22 lives were lost after the Manchester Arena attack during her tour.

Although the pandemic brought events to a standstill across the globe in 2020, the event returned with a bang the following year with performances from Zara Larsson and Katy B, as well as LGBTQ+ talent like Mykki Blanco and DJ Jodie Harsh.

But while many welcomed the return of Manchester Pride Live for a second year, as it brought the elements of a festival-life to a safe, queer space, others felt it detracted from the true meaning of Pride, and priced out many regular festival-goers who couldn’t afford its ticket prices.

After an extensive consultation process with the local LGBTQ+ community about what form they felt the event should take, it was decided that Manchester Pride Live should be stripped from this year’s event taking place across this bank holiday weekend, with full emphasis placed on the Gay Village Party and its Alan Turing, Mancunity and Cabaret stages.

‘Our consultation was about ensuring we welcomed people to have a voice, in particular those who might have less of a voice,’ explains Mark Fletcher, CEO of Manchester Pride.

‘There was no one clear view, but what was clear was about recognising priorities, and providing more empowerment and support for specific communities.’

Among its commitments, as well as focusing celebrations within the Gay Village, Manchester Pride will prioritise inclusion, safety and accessibility. This has been met with resounding support from the community.

‘Everyone I’ve spoken to is glad to see Pride back in the Gay Village and spotlighting the amazing artists who perform there all year round’ says Monopoly Phonic, a DJ, drag queen and recording artist from Manchester who’s performing at this year’s event.

‘Accessibility in an intersectional way needs to be the way going forward’, agrees Katie Craven, who works at the LGBT Foundation and has worked for the charity at numerous Manchester Pride events.

‘All members of the LGBTQ+ community [should] feel safe to access events and spaces across the whole weekend.’

Despite Pride continuing to make strides to showcase and celebrate diverse talent, many LGBTQ+ people of colour still face racism within their own spaces.

‘I wish I could say it was shocking but it’s not,’ Mark admits. ‘I’m one of a few queer leaders of colour. I experience and have experienced racism in my life and in this job. For me, what we can do is tackle it and not be afraid.

‘Manchester is such a pioneering city and Greater Manchester communities are thought leaders.

‘The level of “live and let live” has existed for a long, long time,’ he adds. ‘We champion our diversity. We aren’t afraid of it. That’s embedded in the fabric of Manchester.

‘Pride isn’t for anybody unless it’s for everybody.’