Sydney Harbour will be once more teeming with life thanks to living seawalls scientists hope will bring more penguins, seals, seahorses and turtles to the waterway.

Concrete panels that mimic the natural habitat will be installed in nine additional locations around the harbour to reduce environmental impacts and help marine life as part of a $9.1 million funding boost from the NSW government. 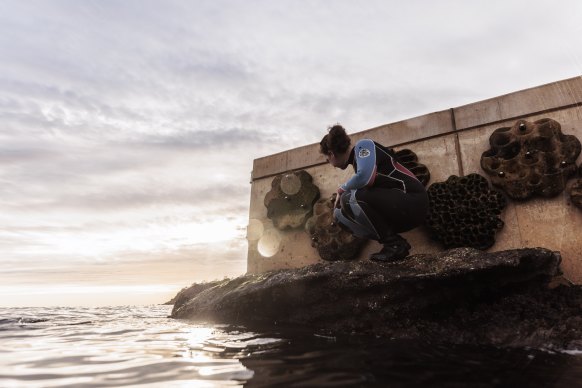 More than 85 per cent of people in NSW live within 50 kilometres of the ocean and coastal tourism employs more than 142,000 people working in the coastal zone.

Sydney already has nine living seawalls scattered around the harbour – and other projects aimed at encouraging biodiversity.

Edwina Harrison often swims in Sydney’s north, including near the Fairy Bower living seawall where she and her friends like to photograph the little fish and moss.

She said if there were more living seawalls around Sydney, it would give swimmers greater opportunities to explore the water and marine life.

“We would go and explore them for sure. The more marine life, the better,” she said. “It’s a beautiful place to swim.”

The government funding boost will also see seagrass meadows and kelp forests replanted in a bid to reinvigorate the area. The first-ever statewide Little Penguin census and seal survey will also be conducted to monitor their preferred locations, habitat and population.

The project, Seabirds to Seascapes, will be led by the NSW Department of Planning and Environment, the Sydney Institute of Marine Science (SIMS), Taronga Conservation Society Australia and NSW National Parks and Wildlife Service.

Chair of SIMS Peter Cochrane said the harbour needed the active intervention of living seawalls to help restore Sydney’s waterways and biodiversity to what it once was.

“Over 50 per cent of Sydney Harbour is built, not natural, so the more we can restore some natural elements to that, the more that biodiversity will return to those walls,” he said.

The nine locations where the new living seawalls will be installed are yet to be finalised, but they will likely be east of the bridge and close to the CBD. Cochrane anticipates about 70 seawall tiles will be installed at each site along with seaweed and seagrass planting in the areas.

He added that living seawalls play a crucial role in encouraging species back to the harbour because they house “filter feeders such as mussels and oysters,” which are species that feed on tiny organisms in the water, ultimately improving water quality in the harbour.

UTS Professor of marine biology David Booth said the project was helping to revitalise the harbour.

“Sydney Harbour’s an estuary, quite a beautiful one. We’ve actually recorded, through time, over 600 species of fish. That’s more than in the entire coast of New Zealand or England,” he said. “But with the loss of biodiversity around these edges, we’re missing some of the smaller species that attract the bigger ones.” 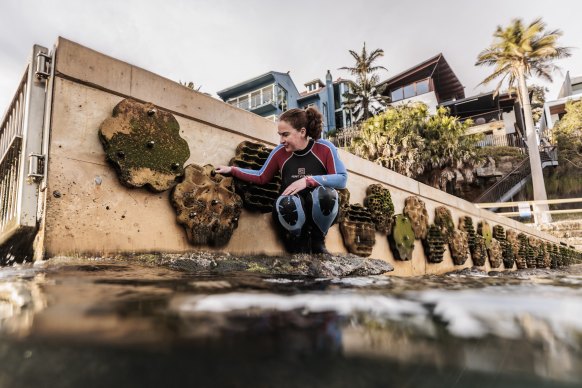 The living seawalls will be installed at nine new locations around the harbour. Credit:Brook Mitchell

He and marine biologist – and partner – Gigi Beretta have previously installed similar reefs around the edge of the Sydney Opera House in partnership with the cultural icon’s sustainability team, which has resulted in the return of the stunning White’s seahorse. They are one of only two seahorse species in the world that are endangered.

Since installing the reefs in 2018, the pair are filled with hope for the rest of the project.

“The Opera House is interesting because it is further upstream [than most other sites] with more murky waters, and yet we’ve found natural seahorses occurring on these reefs,” he said.

“Sydney Harbour is a modern, working harbour at the beating heart of our city, but the effects of urbanisation and industrial activity have resulted in the loss of marine habitats and the species that call them home,” he said.

In the past 50 years, some species of seaweed and seagrass native to Sydney Harbour have disappeared because of the poor water quality as a result of stormwater run-off and chemicals like oil and pesticides that wash into the harbour with it.

One of those species is crayweed, which disappeared from the Sydney metropolitan region from Palm Beach to Cronulla in the 1980s due to water pollution. Cochrane said it will be a particular focus of the restoration process.

“Because we lost it [crayweed] over such an extensive area, you need to actively intervene to reestablish it.”

He said that one of the best examples of crayweed restoration was at Shelly Beach in Manly because “there’s been a concentrated effort to restore cray weed there, and it’s flourishing.”

Seaweeds such as crayweed provide critical habitat and food for marine life. They also act as underwater forests, capturing carbon and creating oxygen.

An example of where restoration has worked in the harbour is at Milsons Point, where seawalls were installed in 2018. In the two years after their installation, 87 species were observed in the living seawall, 26 more species than before.