Getting her money’s worth! 22-year-old shows off Christmas ornament his mom made out of his old BRACES in viral video – after she insisted the $6K orthodontics couldn’t just be tossed in the trash

A young man from Michigan is going viral after showing off his mother’s very creative — and fairly ridiculous — use for his old braces.

Austin, 22, shared a video on TikTok on August 18 in which he recalled getting his braces off as a teenager, explaining that his mom refused to let the dentist throw out the metal brackets once they’d been removed from teeth because they’d cost a fortune.

His mother took the discarded braces home, turning them into a kitschy Christmas ornament for their tree. 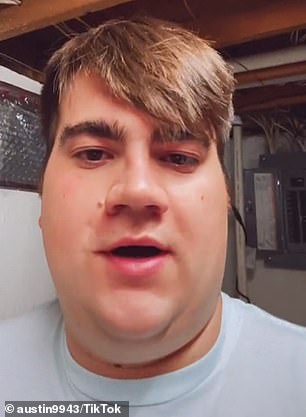 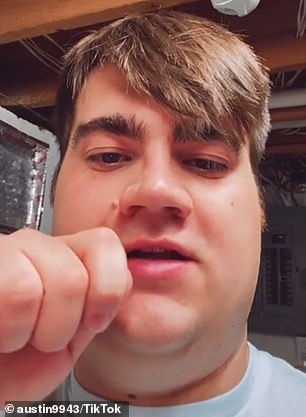 Orthodontia: Austin, 22, shared a video on TikTok about how his mom refused to let the dentist throw out his old braces when they came off in 2014 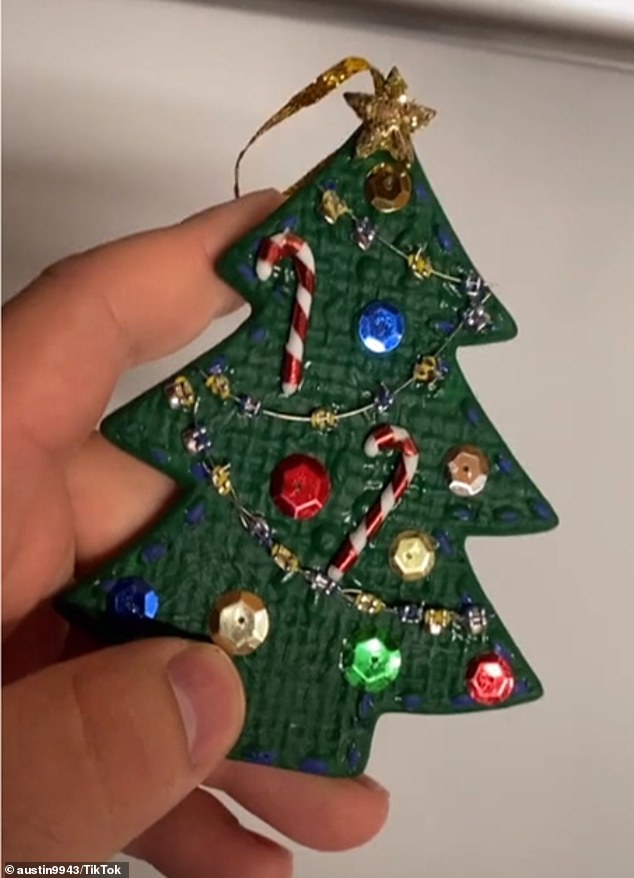 Memento: She turned the $6,000 pieces of metal into faux-lights for a Christmas tree ornament

‘So, I had braces when I was a kid, and after four and a half years, I finally went to have them taken off,’ Austin says in the video, remembering the day in 2014 when his teeth were finally brace-free.

‘And the dentist, like, popped them all off and then put the braces on the tray. And when we were done, she, like, picks up the tray and starts to walk away, and my mom stops her and she goes, “Uh, no.”‘

Confused and embarrassed, Austin asked his mom what she was doing.

Fast-forward to Christmas, and his mother had used the tiny metal pieces to decorate a green tree-shaped ornament, using the little brackets to create a string of lights on the decoration.

‘So now I have this Christmas ornament,’ he says in the video, which has been viewed 1.4 million times.

‘I bet a lot of people don’t do this.” So he made a TikTok about it.

Speaking to Buzzfeed, Austin said that he just found the ornament in storage and imagined that social media users would find it unusual.

The dentist certainly did, though she let Austin’s mom take them.

‘The dentist thought it was kind of weird but had no problem putting them in a bag for us,’ he said ‘In all honesty, I wasn’t as embarrassed as I claim to be in the video. Our family isn’t shy to speak up — not in a Karen sort of way — but by being respectful and speaking up.’

He said his mom presented him with the ornament as a gift, and it still hands on the tree every year.

Austin said that since he has shared the video, he’s has ‘about 3,000 moms comment’ that they want to do this for their own kids.

One person commented: ‘Omg I work in orthodontics and Ive never had someone ask me to keep their braces. Maybe I’ll start giving them away in December for ornaments.’

‘I think it mainly went viral because it’s just a strange idea that most people don’t think about doing,’ Austin said. ‘But Gen X moms love keepsakes, and getting your braces off is somewhat of a milestone in kids’ lives… which is the point of a Christmas ornament.’