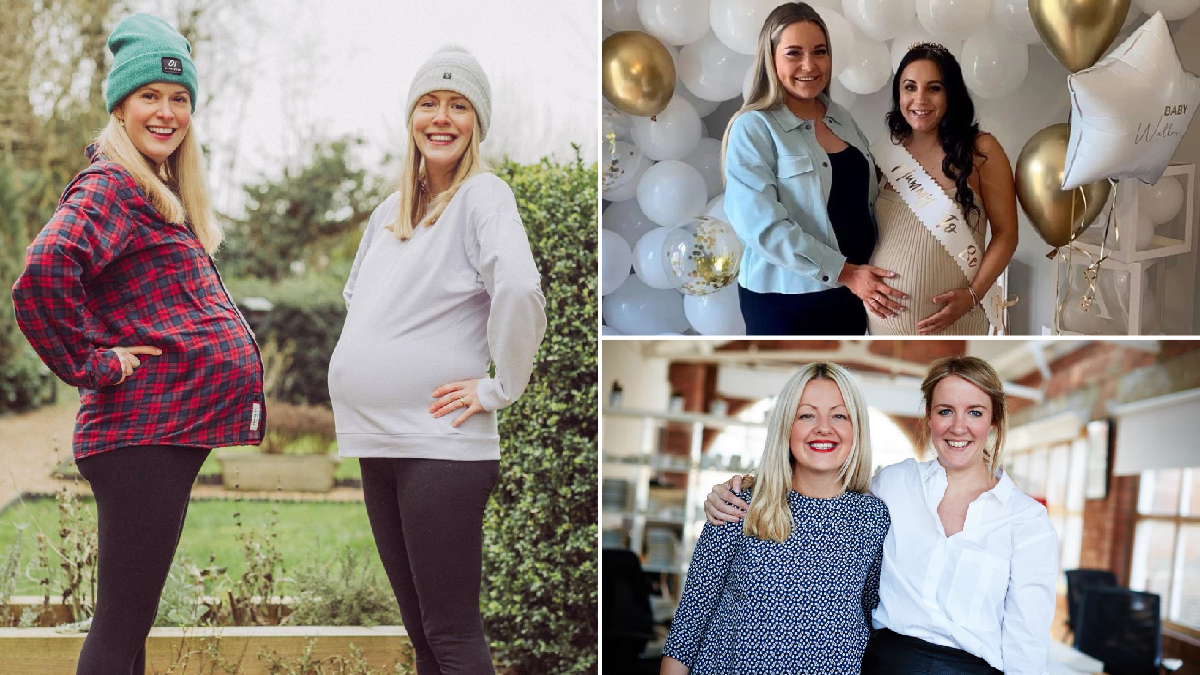 When Leigh-Anne Pinnock announced her pregnancy earlier this month, fans praised her Little Mix bandmates Jade Thirwall and Perrie Edwards for wearing baggy clothes to help her hide her bump.

But just a week later, Perrie revealed that it was actually because she’s expecting a baby too.

The friends have been going through pregnancy together and appeared at the Brit Awards last week for the first time since the announcements, joking about their two upcoming arrivals.

Of course it’s not uncommon to fall pregnant at the same time as your friends – there often comes a time in your life where it feels like everyone is getting married, then having a baby, then a second baby and there’s bound to be some crossover.

But unexpectedly syncing up with a close friend like Leigh-Anne and Perrie can make the experience pretty special.

Nina Green, 39, and Jasmine Headley-Craik, 40, had been friends since their early twenties, when they both worked as account executives at a marketing agency in Leeds.

After 14 years of friendship, they decided to set up a business called Content Soup together in 2014, and just a year later, Nina fell pregnant. Five weeks later, Jasmine told her that she was expecting a baby too.

Nina says: ‘I remember telling her I was pregnant and feeling so bad as she’d been trying. I even cried. But then it happened for her straight after, and we always say it must’ve been the hormones in the office air!’

While it was tricky for them to balance their business and their pregnancies they made it work.

Nina says: ‘We knew what the other was going through and supported each other. She was sick at the smell of coffee so I made sure we didn’t have any in the office.

‘I went to her gender scan with her and sat in the maternity ward when she felt like the baby hadn’t moved one time.

‘I had horrendous headaches at first so couldn’t go to a meeting one time, she covered it. We had a huge pitch once and both covered up horrendous morning sickness.’

But there were some drawbacks for the pair, spending so much time together throughout the 40 weeks.

‘One drawback was the hormones!’ Nina says. ‘We could get on each other’s nerves sometimes.

‘People were also comparing us in terms of bump sizes and shapes and the constant baby talk could be a bit draining.

‘Birth fears were probably magnified as we talked about it a lot and I think she struggled in the weeks when I’d had Lenny and she was waiting to have Milo, she just wanted to have him out and he was late.’

Nina adds: ‘Had we not had our babies at the same time, it would’ve caused problems, so it’s actually worked out really well.

‘We looked after each other’s kids while the other one worked when they were really small. They went to the same nursery and played in soft plays together while we worked at a table. They come into our office after school and play while we finish calls.’

Claire and Laura Jopson, 34, from Milton Keynes, are even closer than friends. The twins have shared so much since they were born – so it felt right when Claire found out she was pregnant just a few weeks after Laura.

Laura ended up giving birth to Henry just a few days before Laura had baby Olive in February this year.

Claire explains: ‘As we both fell pregnant during lockdown, there were no dramatic pregnancy announcements.

‘We told each other over WhatsApp! Laura found out a few weeks before I did, and so it was a little surreal to also be messaging a few weeks later to say that I was also pregnant.

‘There was an initial feeling of shock and slight embarrassment that we were pregnant so close together but that quickly grew into feelings of excitement and relief that we could experience the wild ride of pregnancy together.’

Throughout their pregnancies, they were able to reassure and comfort eachother.

‘We were both feeling the same symptoms of pregnancy or apprehensions about imminent motherhood at the same time,’ Claire says

‘As we run a travel and lifestyle blog together (Twin Perspectives), it was also a huge relief to be pregnant at the same time. It meant there was no tension regarding travel as we were both home with our heads in the toilet most of the nine months.

‘We ended up having our babies just three days apart, and were on the postnatal ward together for four days! With covid restrictions meaning our partners couldn’t visit much at all, knowing we at least had each other in the hospital was hugely comforting.’

Being so close did bring some minor problems for the pair though.

‘As with any twin relationship, there’s always an element of comparison and this crept in at times during our pregnancies.

‘For example, worrying my bump was too small compared to Laura’s or that she was more organised and prepared than I was for motherhood,’ Claire says.

Henry and Olive are now three months old and the twins are enjoying bringing their babies up together.

Danielle Geelan, 24, from Lancashire, is currently pregnant with her first child and was delighted to find out her friend Hannah Wood, 27, was expecting her third at the same time.

They met eight years ago at work and have been close ever since.

Danielle says: ‘The best thing is having someone to talk to about any worries or doubts. Hannah has been pregnant before with two girls so I feel her experience has been beneficial to me with this being my first pregnancy.’

Hannah adds: ‘Being a young mum previously, I felt I went through my pregnancies with nobody to relate to. This time, with being pregnant together, we are constantly messaging and updating each other on our journeys.

‘We have both found this a very positive experience and are just so excited to have our babies and watch them grow together.’